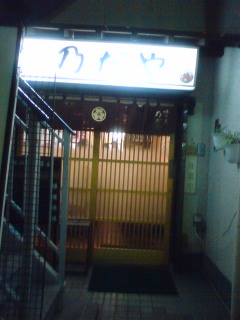 I find myself when trying to define Nodaya. It is not an “odenya” in the strictest sense of the word as it does not limit itself to oden.
Shall I define it as an izakaya specializing in oden?
Whatever the name, it is certainly extremely popular in a city which prides itself for the best oden in Japan. When we arrived there last Monday shortly after 7:00 p.m., the place was packed to the brim. Luckily for us, Momose-San, a member of our merry band had booked a tatami table well in advance. No wonder it is open every day. I can assure you you will need a reservation whatever the day and time! 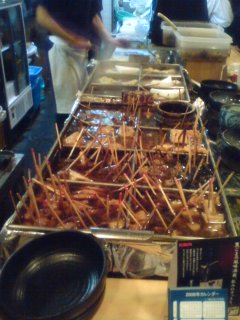 As we were sitting in the tatami room at the far end of the restaurant (they also have a party room on the third floor) we barely had the time to walk by the large vats containing all kinds of oden including the typical dark-brown Shizuoka-style broth.
In any case there was no way that the five of us could have found five seats at the counter. Fine, next time…

Now, the big bonus is that they serve no less than four different Shizuoka in individual 300 ml bottles: Masu-Ichi (Shizuoka City), Hatsukame (Shida Gun), Hana no Mai (Hamamatsu City) and Shidaizumi (Fujieda City). I personally consumed one each of the last two (a junmai genshu and a nama ginjo!). You can’t beat jizake with oden! Incidentally, if you wish to know more about Shizuoka Oden and if you can read Japanese consult the 2008 March edition of DANCYU Magazine! 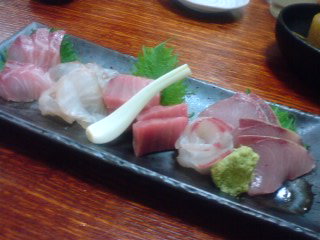 Oden are great, but we chose lighter fare first: sashimi set. Such an offering would not disgrace any Japanese restaurant:
(from right to left) “Buri/yellow tail”, “Kurodai/seabream variety”, “Akami/lean tuna”, “Hirame/sole”, “Isaki/grouper typical of Shizuoka”. By the way, the echalette, shiso and freshly grated wasabi are naturally from Shizuoka.
Momose-San and I reflected whether we would be able to appreciate such great fish at such reasonable prices in say ten years time, considering the ever-dwindling world supply and Tokyo’s unquenchable thirst and greed for our local products. But I’m digressing (although this will become the gist of a future article)… 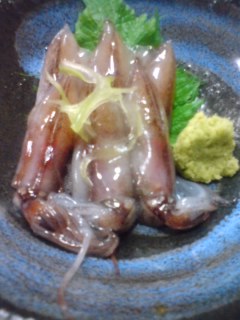 Kawashima-San could not resist the small raw “yari ika/cuttlefish”! I managed to steal one and I can assure you it is not an acquired taste! 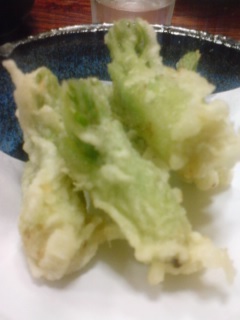 Nodaya also ha some great tempura such as “Tara no me/shoots of the Japanese Angelica Tree/Aralia elata” (also called the “King of Tempura” in Japan!) 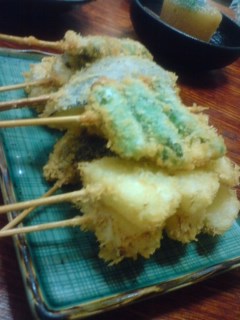 and Japanese-style fried vegetables on sticks.
Foodhoe is going to kill me with all that teasing! 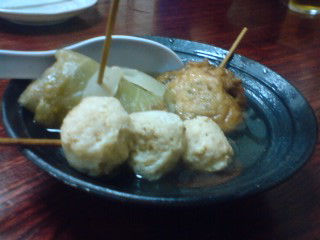 Alright, alright, we did order oden!
They came in three styles actually.
The one above is made in light broth, Kansai-style, 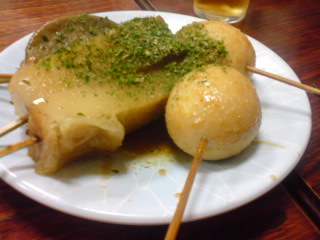 while most are definitely Shizuoka-style served sprinkled with “dashiko/powdered stock” and “aonori/dried grenn seaweed powder”. 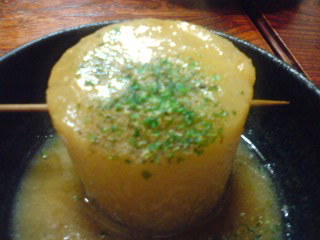 As for vegetarians, I would definitely suggest “daikon”, an oden cooked in miso paste!
My friends did not allow me enough time to record all the other items we ordered but know that there are more than you can eat in a single evening including vegetables, fish, eggs and meat!

No wonder it’s packed with regulars!