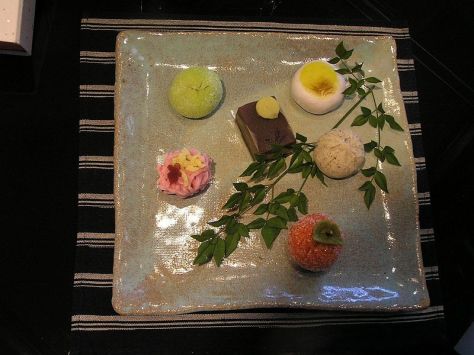 There is a traditional way of making cakes in Japan that ought to please no end vegans and people allergic to wheat flour and dairy products, namely Wagashi!

Wagashi (和菓子) is a traditional Japanese confectionery which is often served with tea, especially the types made of mochi, azuki bean paste, and fruits.

Wagashi is typically made from natural based (mainly plant) ingredients. The names used for wagashi commonly fit a formula—a natural beauty and a word from ancient literature; they are thus often written with hyōgaiji (kanji that are not commonly used or known), and are glossed with furigana.

Generally, confectioneries that were introduced from the West after the Meiji Restoration (1868) are not considered wagashi. Most sorts of Okinawan confectionery and those originating in Europe or China that use ingredients alien to traditional Japanese cuisine, e.g., kasutera, are only rarely referred to as wagashi. 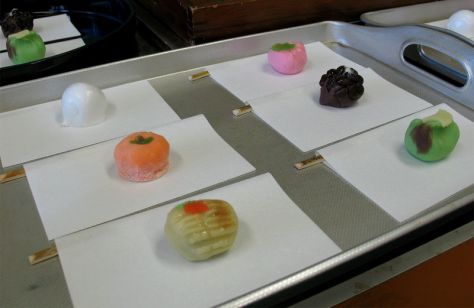 Assortment of wagashi for a tea ceremony

During the Edo period, the production of sugarcane in Okinawa became highly productive, and low quality brown sugar as well as heavily processed white sugar became widely available. A type of sugar, wasanbon, was perfected in this period and is still used exclusively to make wagashi. Wagashi was a popular gift between samurai, in significance much like a good wine. Wagashi is served as part of a Japanese tea ceremony, and serving a good seasonal wagashi shows one’s educational background. 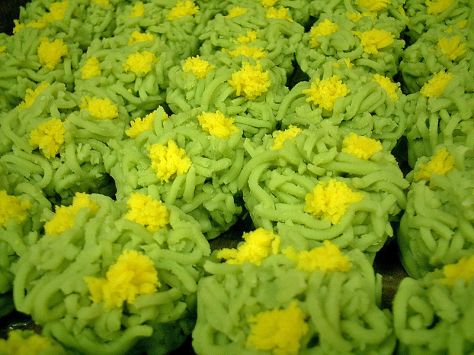 Wagashi in the shape of rape flowers/Na no Hana

There are many, many kinds of Wagashi.
I will introduce them in the next posting, followed by another posting on the basic preparation. 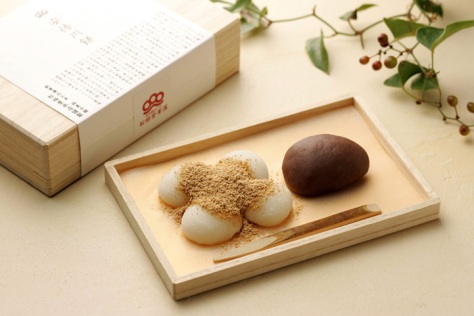 Just know that about every region in Japan has its own traditional Wagashi!

Avaibility:
Wagashi is widely available in Japan, but quite rare outside it.
Minamoto Kitchoan (源 吉兆庵)
Has a varied selection, and stores in New York City (shipping throughout the US), London (shipping throughout Europe), and Singapore, in addition to Japan.
Toraya (とらや)
Has a full Paris store, stores in Japan, and sells a limited selection (yōkan only) at New York stores.
Fugetsu-do
Family owned and operated in the USA, since 1903, Fugetsu-do now ships anywhere in the USA.