Tempura is not difficult to make. If you keep to the basics and good ingredients, you will be able to make a lot of people happy with healthy and beautiful food.

The following instructions should be amply enough to succeed with this celebarted Japanese gastronomic marvel:

What can you fry as tempura?
-Any green or not vegetable as long as they are cut to the appropriate size. Avocado and pumpkin can be made as tempura!
Important: try to keep all vegetables cut to the same size.
If consistency and thickness varies, sort them out accordingly in compatible batches. The frying will be more even, avoiding disappointing discrepancies.
Wash and dry vegetables.
-Any white-fleshed fish, crustaceans and shellfish. Clean and wipe off excessive humidity. Fry them separately from the vegetables. Some red-fleshed fish can be made as tempura, but they are a bit of an acquired taste.

In short, don’ be afraid of experimenting!

Before we go any further, vegans and vegetarians can make tempura. Replace the egg white with cornstarch. Wheat flour allergics can use other flour types, keeping in mind they have to be of the kight-weight and fine sort.

-If you use frozen ingredients, make sure to thaw them completely and wipe off all excess water!

The batter:
-Use an equal amount of fine light flour and pure water.
1 cup of water for 1 cup of flour and 1 egg white are the right proportions.

-First mix water and egg white (or cornstarch/not too much with that one!). Then pour on the flour and mix lightly.
Do not overmix! Flour blobs should still be there! This is the secret for fluffy, light tempura!

Fish, crustaceans and shellfish may be completely dipped in the batter as well as rounded or stick-shaped vegetables including slices of onions, kabocha or avocado.
But in the case of large leafy vegetables such as shiso/perilla or large flat mushrooms such as shiitake, dipping only one side (back side for leaves!) in batter is preferable, otherwise you will end up with masses of fried batter!
Actually, in the case of fish, it is better to dip only the skin side in the batter.

Oil:
-Use plenty.
Use clean fresh oil!
Use salad oil of your preference and sesame oil in a 6:4 ratio.
Bad oil or old oil is bad for your health.
If the oil keep bubbling on upon being heated, change it!

-Fry vegetables before fish or seafood as the latter’s proteins will change the character of the oil.
-Do not crowd the oil. Drop everything in the middle in small batches.
-Do not overfry. Experience will tell you when to take ingredients out.
-Do not fry twice! Full stop! 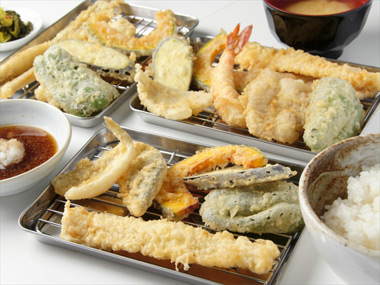 Serve on a piece of kitchen paper after having put the ingredients on a grill for a few seconds to get rid of the excess oil.

Seasoning:
-Personally I eat tempura as it is without anything, but if I use seasoning I like the following:
Matcha powder
Rock salt
Curry mixture powder

Now,if you want to dip your tempura in soup/tsuyu, you can prepare it as follows:
Dashi (konbu/seweed dashi for veganas and vegetarians!): 5 (or 4)
Soy sauce: 1 (or 2)
Mirin/sweet sake: 1
Heat the whole a little before serving.

NOTE:
-You may use freshly grated daikon, lemon juice or a light dressing of your choice for further seasoning.

I chose a fish called “isaki” or “Chicken Grunt” (who came up with that English name?) that is quite common on our shores.
The recipe naturally applies to loadsof fish!

Using a strong short sharp knife (the japanese use the same knife to cut and gut medium size fish), first get rid of the scales as much as possible.
Wash once under running clear cold water.
Cut along the back (not the belly! very important) from the tail to the head as shown on above picture deeply enough to reach the main bone.

Oncethe knife has cut all along the back and reached the head, cut the head in half along the same cutting line.
The head of a isaki being small it is quite easy. It might requires some strength for bigger head fish like seabreams. Call the MOTH then! (not the moths, the “Man”! LOL).

Open the fish and continue cutting in half all the way through.

Take out innards carefully so as not having them getting in contact with the flesh!
Depending upon the season, you might be lucky to get male sperm sacks (shirako). Don’t throw that away. They are great simmered with soy sauce, mirin/sweet sake, japanese sake and chili pepper! (see pic below).

Open the fish and clean it under running clear cold water.
Take water off with some kitchen paper or a clean piece of cloth.
Sprinkle with salt and dry outside under the sun until it has reached a nice aspect. You could also smoke it.
It can be preserved insde an airtight plastic bag and frozen, although eaten quickly it will taste so much better!

The Japanese grill their himono/dried fish pasted with a liuttel soy sauce or tare. Beautiful with beer, Good Beer and Country Boys!

If grilled with salt don’t forget the freshly grated daikon (and lemon juice, and soy sauce…)

The male sperm sacs (shirako) make for a great snack with your beer or sake once simmered in soy sauce, mirin/sweet sake and Japanese sake (and a little chili pepper)!

When Bryan and Sayuri Baird founded Baird Brewery in March 2000 in Numazu City, a celebrated harbor in Shizuoka Prefecture, very few people could have imagined than no less than nine years later, their beers would be savored on both sides and across the Pacific Ocean, and in pubs and bars dotted all over Japan!

What is the secret of a couple born in Okinawa (Sayuri) and in the US (Bryan), who has succeeded in managing their business and raising their children at the same time?

In Bryan’s words, they are a family born of a deep passion for beer and a great reverence for brewing history, tradition and culture. Their motto is “Celebrating Beer”, meaning to them not simply the production and sale of beer of character and quality but even more importantly but also entailing the comprehensive enjoyment of beer in a way that enhances the overall experience of life.

Baird Beer is, above all, an experience in flavor.
The flavors of malt and hops and yeast are highlighted and celebrated to their utmost.
The basic formula for the entire line-up of hand-crafted Baird Beer is the same: “Balance + Complexity = Character”.
Baird Beers burst with flavor and character rarely witnessed in this country.
They are made in tiny batches with painstaking care, passion and reverence to tradition.

All bottled Baird beer is unfiltered and undergoes a secondary fermentation in the bottle, producing a lovely and completely carbonation. Yeast sediment is at the bottom of the bottle, meaning that beer should be poured gently into your glass so as to leave the yeast sediment in the bottle. 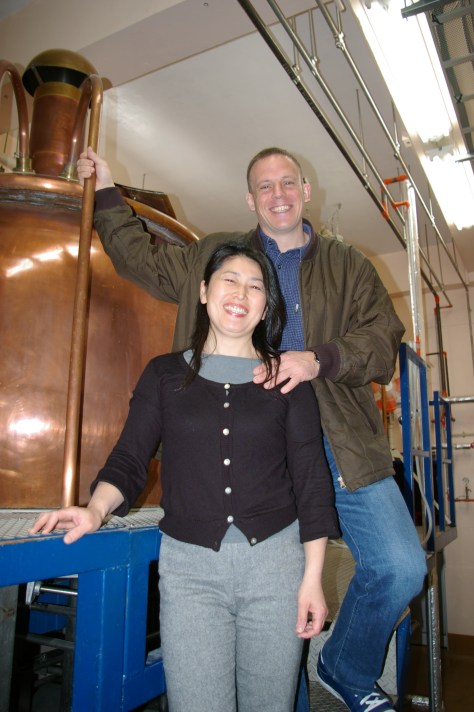 Bottle-conditioned Baird Beer requires refrigeration, but for maximum enjoyment should be drunk at cool (8~12 C), not cold temperatures.
Although the beer can cold-aged for long periods, in general, it is highly recommended to drink them sooner than later.

Baird beers are available both as year-round brands and seasonal brands.
Year-round brands are of eight kinds:
Wheat King Ale, Rising Sun Pale Ale, Red Rose Amber, Teikoku IPA, Angry Brown Ale, Kurofune Porter and Shimaguni Stout.
The brewers of Baird Beer annually craft a plethora of seasonal beers because they are convinced that beer is simply the most diverse and exciting beverage on Earth.
Seasonal Baird Beers are produced in of five seasonal beer series:
Baird lager Beer Series, consisting of top-fermenting ales in styles such as Bock, Pilsner, Marzen and so forth.
Baird Strong Ale Beer Series with high-gravity, high-alcohol brews similar to Imperial Stout, Wheat and Barley Wine and strong Scotch Ale.
Baird Brewmaster’s Select Beer Series made with unusual ingredients such as fruits and spices , a traditional hallmark of Belgian brewing. Even Japanese mikans and kabocha, coffee and spices find their way into these brews!
Baird Beer Classics conceived to recreate classic ale styles and reminisce about the past.
Baird Wood-Aged Beer Series consisting of brews aged inside wood casks which formerly held bourbon whisky or wine, a tradition recently pioneered by craft brewers in the U.S.

All beers are available on tap, in cask-conditioned at their three Taprooms in Numazu City and Tokyo (Nakameguro and Harajuku), as well as at select pubs and restaurants in Japan.
Bottle-conditioned Baird Beer may be purchased direct from the Brewery through their website estore and through select pubs, restaurants and liquor shops in Japan.
For a complete listing of Baird beer retailers in Japan, visit the retailers section of their website at
http://bairdbeer.com/en/bairdbeer/retailers

The Fishmarket Taproom in Numazu City

-Fishmarket Taproom in Numazu City.
This is where all began for Baird ber. The heart, soul, sweat and tears of thir enterprise reside there, Open in July 2000, the Numazu taproom spent many years ignored by the locals. Fortunately, though, a friendly neighborhood atmosphere, characterful beer, great beer-inspired food, and matchlee camaraderie seem to have won out. The fact that their prices are for the most reasonable for craft beer anywhere in Japan is a plus, too.
This is where you will find the brewers and owner-partners of Baird Beer drinking on a regular basis., as well as the oldest Baird fans!
Opening hours: Monday and Wednesday through Friday: 17:00~24:00, Saturday and Sunday and National Holidays: 12:00~24:00. Closed on Tuesdays
Address: 19-4, Senbonminato-cho, Numazu City, Shizuoka Prefecture, 410-0845
Phone: 055-963-2628
Access: Tokaido Line=get off at Numazu Station. Shinkansen=disembark at Mishima and change to the Tokaido Line.

Nakameguro Taproom in Tokyo
The Nakameguro Taproom opened in May 2008 as Baird’s first Tokyo-area pub. Like the original Fishmarket Taproom, it enjoys an all-natural wood and brick décor that is warm, inviting and unpretentious. It has space to seat up to 60 patrons, which makes an ideal venue for parties and group events.
Twenty taps and four hand-pumps are devoted to the perfect dispense of a terrific variety of Baird Beer. They have added four new taps dedicated to superb rotation of other world-class craft beers.
Opening hours: Weekdays: 14:00~24:00, Saturday and Sunday and National Holidays: 12:00~24:00.
Address: Nakameguro GT Plaza C-Block 2F, 2-1-3, Kamemiguro, Meguro Ku, Tokyo:
Phone: 03-5768-3025
Access: Within walking distance of Nakameguro Station, Tokyutoyoko Line

As yesterday’s bento was based on rice,the Missus decided I needed something lighter today, hence her other specialty: “Open Sandwich Bento”!
Talking of rice, the steamed rice leftovers of yesterday’s bento came back onto my plate last night: As we had nabe/Japanese pot au feu, she poured some of the soup stock onto the rice, heated it and added some leaves/herbs to make a simple but great Japanese-style risotto! 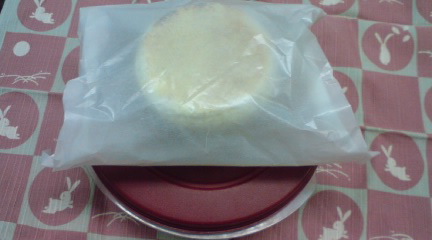 Almost looked like one of those old-fashioned US workers’ boxed lunches! 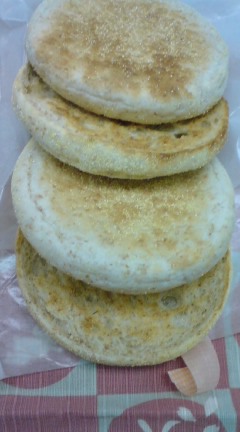 As for bread she toasted (made in Japan) English style barley muffins: light and crispy. 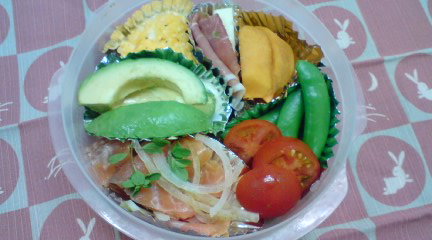