Shizuoka City and Prefecture are not only famous for their vegetables, but also for their fruits, and figs are certainly very popular here!
Shizuoka Prefecture also produces more than 45% of the total green tea crop in Japan, but did you know it was also the birthplace of dark tea (black or red) in Japan?

Chef Tooru Arima/有馬亨さん has this knack and talent to combine French and Japanese gastronomies in a constant search for originality and new tastes!
I wonder how much time he spends on them as the simple complete peeling of a fig before cooking it in compote is painstaking and sticky work!

Preparing food is one thing, but presenting it is certainly another!
No wonder Tooru’s desserts are so celebrated in this town!
Incidentally, this beautiful mint is organic from Hirokawa Garden in Mishima City! 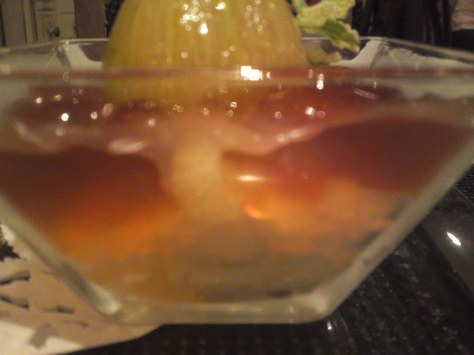 The jelly is made from dark tea cultivated and processed in Shizuoka Prefecture and laid over a granite made with the juices of the fig compote! 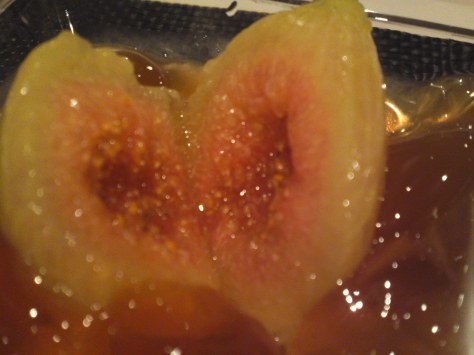 Yes, not only a spoon but you also need a fork and knife to fully enjoy and appreciate this superb dessert!
I do not need to explain the pleasure I had cutting the fig and admiring the colors!

And it was absolutely succulent and again perfect in this hot weather!
To be continued…

Kakegawa City and its neighborhood are celebrated all over Japan for its superlative tomatoes.
Chef Tooru Arima/有馬亨さん, who is very particular about his vegetables, obtains his tomatoes from Mr. Ishitani/石谷さん and comes with some very interesting, and delicious, creations with a vegetable which has become so common!

The tomatoes come into two facets of this beautiful dish:
First the tomato jelly which “rides” a piece of marinated salmon called “tokishirazu”/時鮭, a variety from Hokkaido. This jelly is made from sieved tomato pulp, gelatin and the strict minimum of (secret?) spices, salt and pepper.
Second the soup, or gaspacho, made with the same sieved tomato pulp and first-class olive oil. 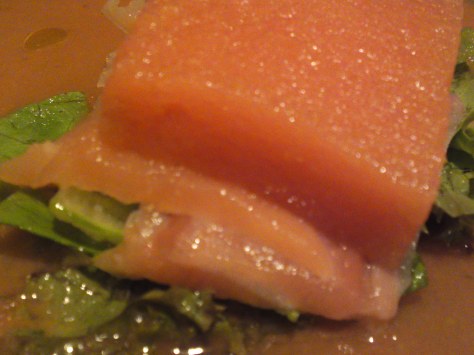 For a better view!

The bed of lettuce is organic from Hirokawa Garden in Mishima City!
Served chilled, it makes for the perfect appetizer in hot summer! I can assure I didn’t leave a drop of the gaspacho!
And it is so healthy! 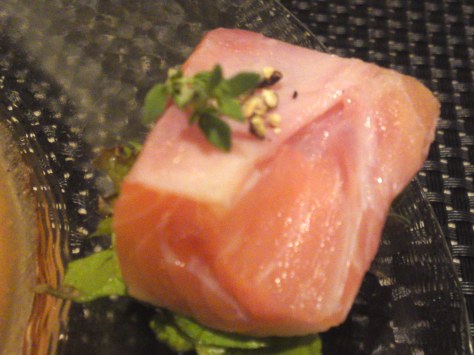 A little pice of the same marinated salmon with coarse ground pepper!

I’m getting used to earthquakes…
Just before midnight yesterday the shouts of the Missus woke me up. I had gone to bed early while she was still fiddling with the computer.
On the Japanese scale a 6.2 tremor struck from deep in the Suruga Bay just in front of Shizuoka City which was jolted up to 5.2 but only for a short time fortunately.
Having made sure the Missus had calmed down I just went back to bed…

This morning things were normal as no tsunami or damage had been announced.
The Missus was soon hard at work preparing my bento…

While the rice was being steamed she prepared one of her specialties, chicken breast fillets stir-fried with burdock root and black sesame seeds. She included sesame oil and spices at the last minute and mixed the whole with the rice and letting it cool before filling the first box with it!

I contributed to the side dish as she used some of the organic vegetables from Kitayama Farm in Fujinomiya City I had brought her last Sunday.

She stir-fried the above as well as using some of the tomatoes for the salad.

She stir-fried the small violet egg plants she had sliced beforehand with the roughly cut banana pimento in basically the same way as the chicken with plenty of yellow sesame seeds.
She cooked plain and slightly sweet tamagoyaki/Japanese omelette with a nice crispy outside.

As for the salad she placed three types of sliced tomatoes on a bed of lettuce: The orange tomatoes and the green heirloom tomatoes are organic.
She added a last touch with Shizuoka-grown (Shimizu Ku) blueberries.

Who said that an earthquake stimulates the appetite?

We continue thirstily working down through our deep lineup of Baird Beer summer seasonals. Today it is one of our special fruited ales that is stepping up to the plate: Asian Beauty Biwa Ale.

Asian Beauty Biwa Ale 2011 (ABV 5.8%):
Biwa is “the small, yellow, edible, plum-like fruit of the loquat tree.” We had no idea what it was until our partner-friend-carpenter-farmer, Nagakura-san, brought some in several years ago for us to taste and then brew with. It is an extremely subtle fruit that harmonizes sweetness with tartness. Asian Beauty Biwa Ale is coyly fruity, spritely effervescent and yet delicately firm — like a true Asian Beauty!

Asian Beauty Biwa Ale 2011 begins pouring from our Taproom taps beginning Wednesday, August 3, and it is available for delivery from our brewery beginning Tuesday, August 2. Due to the very limited number of bottles (633 ml), we will not be selling Asian Beauty on our consumer E-Shop. It will be available, however, through select Baird Beer retailing liquor shops in Japan.

In the summer seasonal on deck circle is a sacred ale: Brewer’s Secret Handshake.

Brewer’s Secret Handshake (ABV 6.0%):
The German city of Dusseldorf is renowned for its Altbier. From time to time, apparently, the city’s Altbier brewpub brewers make seasonal specialty Alts as surprise treats for customers. These specialty Alts are known as sticke (secret) Alts or Latzenbier (slab beer). Compared to standard Altbier, the secret versions tend to be stronger, darker and hoppier, according to German beer writer Horst Dornbush.

Brewer’s Secret Handshake is our version of a sticke Alt. It is fairly strong (6% by volume), darkish brown in color, and unabashedly hoppy (50 IBUs of US Magnum, NZ Hallertau Aroma, US Perle and German Tettnanger). It will be available to Taproom patrons who are privy to the brewer’s secret handshake beginning Wednesday, August 10. Shipments to Baird Beer retail accounts will begin on Tuesday, August 9. Retail accounts are welcome to contact Kojima-san at the brewery office and begin reserving for shipment kegs and bottles (633 ml). Again, due to very limited bottle supply, we will not be selling Brewer’s Secret Handshake on the brewery E-Shop.

That Japanese traditional yakitori-style food and flavorful craft beer are wonderful mates when matched together has been demonstrated beyond doubt by our Harajuku Taproom. This coming weekend, the Harajuku Taproom will be celebrating its 2-year birthday. Highlights of the weekend celebration include:

Tapping of its anniversary ale: Terrible Two Hara-Tap Birthday Ale (a strong golden ale — 6.7% abv — with moderate levels of hop bitterness but heavily laden with spicy-herbal hop flavor and aroma (courtesy of Slovenian Styrian Golding, US Santiam and NZ Hallertau Aroma). This special brew will be available only on draught and only at the Harajuku Taproom
Special weekend-only food menu with items priced in the 500 yen range.
Standing room will be made available for this weekend event and all orders will be handled on a cash-on basis. Please mark your calendar and plan on joining the celebration (and be sure to wish the terrific team at Harajuku a Happy Birthday!). 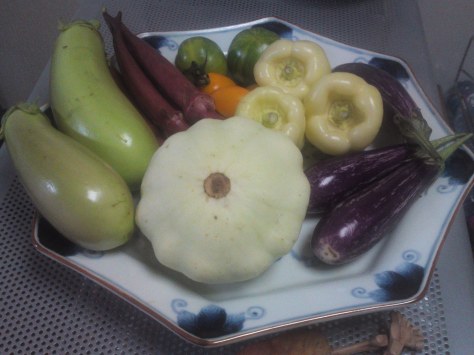 As the second Sunny Sunday Event was held in front of Parco Department Store, Shizuoka City, yesterday I went to check if Ｉ could find new participants to this local market featuring shops and growers from all over the Ｐrefecture.

It certainly paid off as I had the pleasure to meet Masaaki and Kiko Hirakaki/平垣雅章と紀子さん, a very young-minded couple from as far as Fujinomiya City at the foot of Mount Fuji, an area celebrated for its many organic vegetables growers!

These beautiful pumpkins are not easily available in Europe but here in Japan they are very popular! 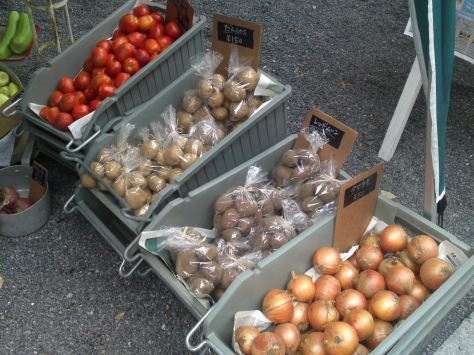 It is certainly a great pleasure for a lot of people to discover that such common place vegetables are also grown organically! 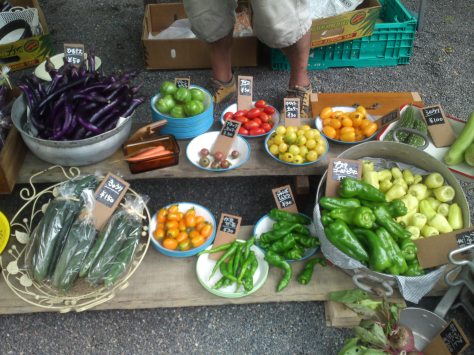 So cute and so appetiｚing!

They were so passionate explaining everyone all about their vegetables, their season, their taste, the best way to cook them and so forth! 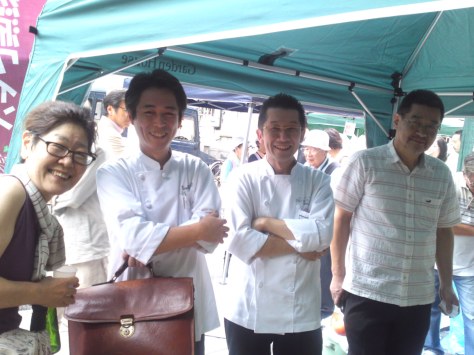 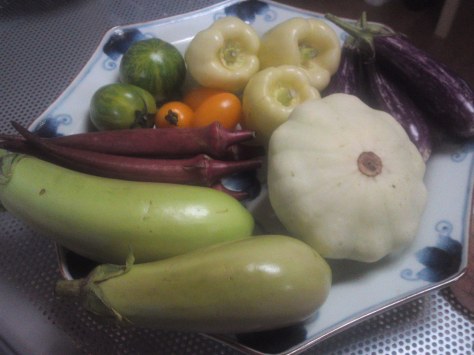 Look at the beauties I bought and that the Missus is going to prepare for us tonight!

I will have ample opportunity to explain all about their vegetables and varieties as I’m going all the way to Fujinomiya City and interview them very soon!