Last Wednesday I travelled all the way up to a site 700 meters high on the slopes of Mount Fuji in Fujinomiya City to visit arguably the best Trout Farm in Japan (there are 4 more companies in Fujinomiya City alone!) in the company of Chefs and Farmers from Central Shizuoka Prefecture who have just created a group called “Wasabi No Kai” to promote good food from production to the table!

The Wasabi No Kai” group of chefs (French, Italian and Spanish gastronomy in this case) a wine shop owner and a farmer from Fujieda City in discussion with the the President of Kakishima Trout Farm.

It was another blistering hot day even in the morning with temperatures in the middle 30’s, but it did not prevent Mrs. Izumi Iwamoto, the 2nd generation owner of Kakishima Trout Farm, to take us on a grand tour of the premises with a wealth of explanations and information!

The fish farm was established 35 years ago in Fujinomiya City (the company has two other farms in Kannami and Izu City with a total of 8 staff) in a spot located at 700 meter altitude on the slopes of Mount Fuji because of the constant access to natural water at a constant temperature around 12 degrees for an ideal environment for fish farming. 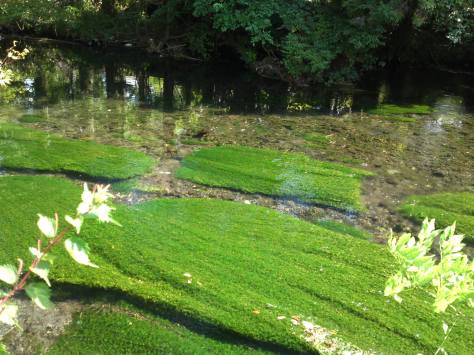 One just has to take the water from the abundant waterfalls and streams nearby!

The water is funneled into concrete open-air tanks covered with nets to protect them from birds and falling leaves in particular.

The water goes through nets at the entrance of each tank to filter any debris out.

The water is then allowed to flow constantly through the tanks.

The water is finally released back into the nature.
The water will never be used twice or allowed to stagnate, ensuring the safety of the fish and their meat.
Thanks to this constant help from the nature a great load of the work is taken off the staff’s shoulders who are constantly busy feeding the fish, repairing the nets, cleaning the tanks, clearing the surroundings and what else!

All the nature surrounding the farm is free from any agrichemicals or pesticides which might find their way into the water! 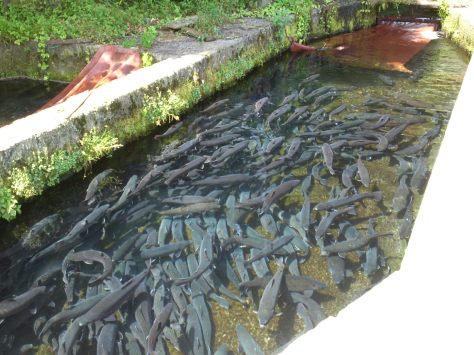 Enormous iwana up to 2 kg apiece!
It takes no less than 2 years to bring such a fish to maturity!

It is dawn to dusk work, even for Mrs. Iwamoto who had woken up at 5:00 a.m. to feed the fish in the company of her son before welcoming us for her interview!

Not only the fish has to be prepared for delivery (with plenty of ice in summer!) in safe packaging every day but also live to many fishing ponds all over the nation! Actually they are the only company in Japan capable to provide live fighting fish for the pleasure of anglers and gastronomes! 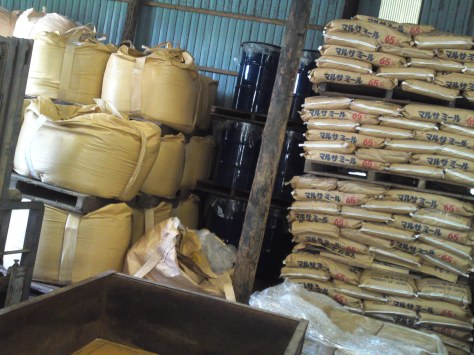 But for all the ideal natural environment and the daily care the main concern is feed!
And 35 years of experience and personal research were certainly not too much.
They used to produce their feed with half of it home-made and half bought, especially Peruvian anchovy.

But due to the price increase and quality decrease of the latter they decided to use Japanese meal (Yaizu bonito for example) for better and safer traceability.
Trouts are voracious fish and they have to be fed every morning!

The feed is a strict and constant mixture of higher quality fish, wheat, vitamins and natural salt.
No shortcuts like oily or fatty components are used to accelerate the growth of the fish.
From this very year all feed is completely natural, even including cocoa husks for polyphenols!
Mrs. Iwamamoto is always carrying a colormeter with her to check the color and leanness of the flesh of their fish!

But even so, nature itself can bring all these efforts to produce extravagant fish to nought: a particularly ferocious typhoon carried away or killed all the fish two years ago! 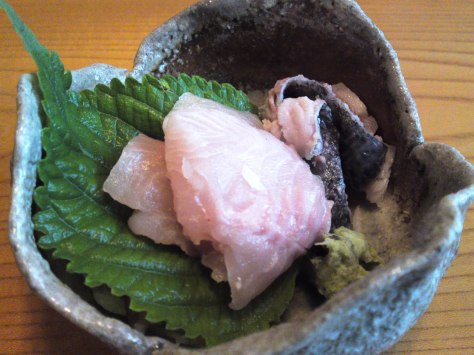 Kakishima Trout farm fish are gaining a greatly deserved celebrity in our Prefecture and are recognized as Shizuoka Prefecture Agricultural Products by the Government and gastronomic restaurants are hurrying to better know and acquire their fish!
Expect to find their fish in coming reports on local restaurants!