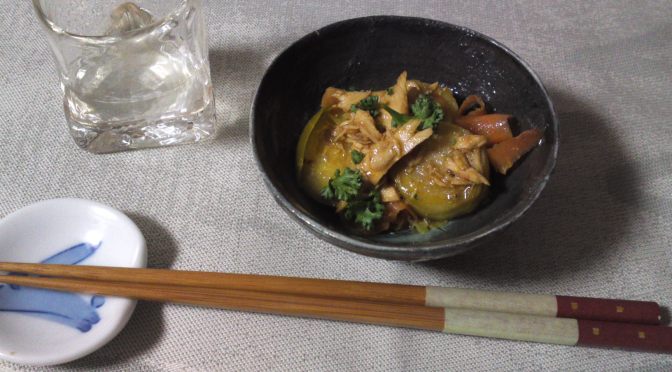 O-toushi/お通しis actually a bit difficult to translate.
In a Japanese (in Japan) izakaya it is an appetizer that is served with the first drink and that you pay for in general in lieu of a cover charge.
I have nothing against such a notion as it gives you a good idea of the chef’s skills!

This is the season for Brussels sprouts, an eclectic vegetable which is increasingly becoming popular in Japan for its small shape and ornamental possibilities.
It has also the advantages to be available in the cold season and is a great source of vitamins and fibers.

Dragon came up with the idea of boiling some Brussels Sprouts in salted water first, then cut them into thick slices before cooking them gently with Shizuoka oil tuna ans some seasonings.
She let the whole cool down completely before serving together it with carrot tagliatelle and topped with some parsley.