The greater Tokyo area has always constituted the primary market for Baird Beer. In fact, even though our brewery and first Taproom business (Fishmarket Taproom) were started and are based in Numazu, Shizuoka, it would be no exaggeration to state that we survived our first decade because of the fan base in Tokyo.

It was four years ago this month that we finally brought our Taproom concept to where the action was — Tokyo. We opened the Nakameguro Taproom on May 10, 2008. We will be celebrating the 4-year anniversary of our Nakameguro Taproom beginning this Thursday, May 10.

This 4th birthday party promises to be a culinary, as well as beer, treat as new head chef Joon and his kitchen staff are planning a special menu of French brasserie style dishes. Menu highlights include: Quiche with homemade smoked bacon and cheddar cheese; “Palourdes Sayuri” with Frites (Saison Sayuri steamed clams with fries); and Morning Coffee Stout Float with Maris Otter Tuile. (Go to the Nakameguro Taproom blog for a complete menu listing: http://bairdbeer.com/ja/blog_nakameguro/). For those of you who have not been by to meet and taste the wonderful food of Chef Joon, this is a golden opportunity.

Of course no Taproom birthday celebration would be complete without a special commemorative batch of Baird Beer. This year, our brewers are honoring the Nakameguro Taproom with NT-4 Belgian Real Red Ale. This spicy and fruity Belgian-yeast fermented red ale (ABV 6.6%) is to be served de-gassed as ‘real ale’ dispensed through an English hand-pump — a first for us with a Belgian yeast beer. NT-4 Belgian Real Red Ale will be tapped at the opening of business on Thursday, May 10.

May 10 also happens to be the birthday of my partner and wife, Sayuri, and she and I will be celebrating at the Nakameguro Taproom with the sneak-preview release of Saison Sayuri 2012. Please plan to join us for what promises to be a deliciously fun celebration.

Saison is an idiosyncratic Belgian-style beer of moderate strength that tends to be spicy and highly refreshing. Sayuri, of course, is my wife and partner and matron saint of Baird Beer. Saison Sayuriis my annual birthday tribute to this lovely woman. The 2012 version is brewed with small spice-like additions of the peels and fresh juice of local aoshima mikan fruit from the local orchard of our carpenter and friend, Nagakura-san. The result is a piquantly quenching brew that still manages a great, albeit understated, depth of character.

Saison Sayuri will be available both in kegs and bottles (630 ml) at Baird Beer retailing pubs, restaurants and liquor stores beginning Friday, May 11.

This is our first go at an India Pale Ale brewed entirely with continental European malt and hops — malt being German and Slovenian, hops being all German (70 BUs in the kettle and whirlpool; double dry-hopping with a combination of Tradition, Spalter, Tettnanger, and Hersbrucker). The character is wonderfully herbal and floral.

Continental IPA is part of our May Hop Madness Month event which is ongoing at all of our Taproom pubs. It will be available both on draught and in bottles (630 ml) at other Baird Beer retailing pubs, restaurants and liquor stores beginning Friday, May 11.

May Hop Madness Month is not the only gig we got going on at our Taprooms this month. May 10 is a day of two significant birthdays for us — my wife and Baird Beer matron saint, Sayuri’s, and the Nakameguro Taproom’s. Nakameguro Taproom is turning four, Sayuri 4x.

Please join Sayuri and me for a double birthday celebration at the Nakameguro Taproom on Thursday, May 10. Beer highlights will include the 2012 debut tapping of Saison Sayuri, my annual beer tribute to her, as well as the unveiling of NT-4 Belgian Real Red Ale, our first go at a Belgian yeast-fermented real ale dispensed via hand-pump. Even more glorious, though, will be the special Belgian Brasserie-inspired food menu being put together by our extraordinarily gifted new head chef, Joon Ou. If you haven’t yet had a chance to sample the amazing beer cuisine that Chef Joon has been crafting since his start a month ago, this is your opportunity.

More event details will be forthcoming shortly. In the meantime, enjoy a very hoppy May!

Every season is a good season for characterful craft beer; spring, though, being a time of new beginnings, seems a particularly propitious season for the release of exciting and innovative beer styles. Today I am happy to announce the 2012 release of two terrific spring seasonal brews: Four Sisters Spring Bock and Pacific Century Citrus IPA.

Baird Four Sisters Spring Bock is brewed in the spirit of a German Maibock, albeit one of the type that was brewed centuries ago in the city of Einbeck and that was noted for its generous use of malted wheat. Four Sisters Spring Bock sports a deep copper-gold color and enjoys a sweet floral nose from aroma additions of German Hersbrucker hops. In the mouth, a rich malty character will introduce itself before quickly giving way to an extremely smooth, round finish in which a hint of honeyed-malt flavor and warm alcohol character lingers.

Four Sisters Spring bock is available on draught and a small quantity of bottles (630 ml) will be for sale through our brewery E-shop.

We have brewed this unique IPA annually for the past several years, each time combining a different local citrus fruit with a changing blend of hop varieties. This year we chose aoshima mikans as the citrus fruit and combined them with the following blend of hops: Magnum, Nelson Sauvin, Cascade, Santiam and Ahtanum. The result is a deeply complex IPA that enjoys a nuanced and layered citrus-fruit character.

Pacific Century Citrus IPA is available in both kegs and bottles (630 ml). Quantities are limited and sold on a first-come, first-serve basis.

A Season for Stout

Stouts are top-fermented ales that are black in color. While the captivating mystery of Stout is tied to its midnight hue, the opaque darkness of the style also tends to camouflage the diversity of flavor inherent in it. This is a shame because all black beers most definitely are not the same. For me personally, exploration of the flavor diversity inherent in the Stout category has been a joyful road of discovery. Today, I would like to share some of that joy in the form of two special seasonal sweet stouts that we are releasing: Mama’s Milk Stout and Chocolate Wheat Stout.

Milk Stout is a stout of moderate gravity and alcohol that is brewed with a portion of milk sugar (lactose). This lactose is not fermentable by brewer’s yeast and thus remains in the beer after fermentation, contributing to the body and mouthfeel of the beer. Milk Stout was once thought to be a beer good for nursing mothers. The flavor is certainly one that makes the imbiber feel wholesomely nourished.

Mama’s Milk Stout is available on both draught and in bottles (630 ml).

This is another version of a sweet stout (i.e. a low-attenuated stout that is rich and full in body and mouthfeel). Normally, stouts derive their color and roasty character primarily from roast barely and/or black patent malt. This stout is brewed with a single specialty malt from Germany: chocolate wheat. Chocolate malt is less heavily roasted and charred than roast barely or black patent malt, while wheat tends to be lighter, tangier, and rounder in flavor than barley.

Chocolate Wheat Stout is available on draught only.

These unique seasonal stouts begin pouring today from the taps of our Taproom pubs. They will be available at other fine Baird Beer retailing establishments in Japan beginning Wednesday, March 28.

There are many ways in which to show that special someone just how much you care. The gift of chocolate or flowers is a traditional one. As brewers and beer enthusiasts, though, we prefer a more personal expression: the gift of beer.

This lovingly crafted stout derives its name and character from two sources: mashing with generous portions of chocolate malt (both barley and wheat) and fermentation with our Belgian yeast strain. The flavor does not deceive; it is rich and chocolaty, complex and spicy.

Belgian Chocolate Stout is now on tap at all of our Taproom pubs, waiting to be enjoyed by you and that special someone. And if it doesn’t manage to do the trick, I think we also have some real Belgian chocolate on the menu.

In addition to draught, bottle versions also are available for purchase from the brewery.

It was back in the fall of 2001 that the builder of our Fishmarket Taproom, Nagakura-san, who since had become a stalwart Taproom patron and loyal friend, brought to me in my little backroom brewery a crate of mikan fruit freshly picked from his family orchard. “Can you use these in a beer?” he inquired. “If not, just share them with customers and your family.”

I, like many professional brewers, harbored a prejudice against fruit beers. Why? Because most of the ones available tended to be gimmick beers, brewed not with real fruit but rather processed extracts, that were designed to appeal to people who didn’t like beer to begin with. However, I quickly decided to formulate a beer that incorporated the carpenter’s mikan fruit. Not only did the idea of using a fresh, local, minimally processed ingredient fit perfectly with the Baird Beer philosophy, but the mikan fruit was delicious. It’s vibrant citrus character, I thought, could be combined in a wonderfully complementary way with various citrus-forward hop varieties being cultivated in the western United States.

The first batch of the Carpenter’s Mikan Ale (all 30 liters of it), was poured, with a tiny bit of trepidation, to Fishmarket Taproom customer-friends who had gathered there at 8:30 am on a Monday morning to view the 2002 Super Bowl (a game that pitted the then powerhouse St. Louis Rams against the upstart Tom Brady-led New England Patriots). The Patriots won their first Super Bowl; the Carpenter’s Mikan Ale won the hearts and the drinking loyalty of all who gathered that morning.

The Carpenter’s Mikan Ale 2012, the ten-year anniversary version, will begin pouring at our Taproom pubs just before the 8:30 am (Monday, Feb. 6) kick-off of the 2012 Super Bowl (NY Giants vs. New England Patriots).

The mikans used in this brew are fresh, succulent, and local — harvested on the Heda land and by the hand of our carpenter friend, Nagakura-san. The Baird brewers hand-process the harvested mikans, shaving off the outer skin of the peel and pressing the juice. Both peel shavings and juice are added to the brew during wort production and before fermentation. The mikans serve to add depth and complexity to an already sumptuous ale; their role is to complement, not dominate.

Once again the character of this year’s version is marked most notably by the succulent aroma and piquant flavor of sweet-tart mikans and their wonderfully symbiotic interaction with our selected hop varieties (Nelson Sauvin, Cascade, New Zealand Cascade, Ahtanum).

In addition to our Taproom pubs, the Carpenter’s Mikan Ale will also be available either on draught or in bottles (630 ml) at fine Baird Beer retailers throughout Japan beginning Tuesday, February 7.

Stephan Rager in Fujinomiya City is the only German national who is both the owner and the master brewer of a brewery in Japan!
The German Embassy in Tokyo is fully aware of it and regularly orders his beer for special occasions! 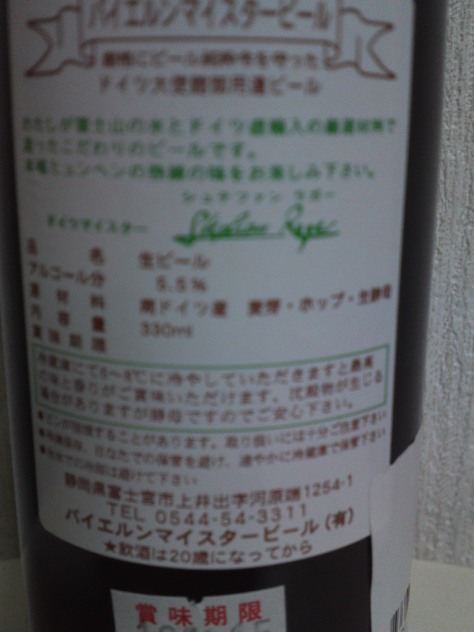 Stephan fluently speaks English and Japanese on top of his own native language, and if you cannot read Japanese you might have to call him for more information!

At least the cap is overwritten in plain German!
I did actually conducted a tasting of the same brand two years ago with my good friend Patrick, but I certainly needed some refreshing!