These Millefuille (the name for a French cake meaning “one thousand sheets”) are not on the menu. It all came from a personal request I made to Kenta, but if you mention it to the Chef, he will be more than happy to create one along your preferences and the available ingredients!

I collected all these masterpieces I all ordered personally but for two.

The above Millefeuile was called (all the names of these special sushi were agreed between the two of us!) Akita Millefeuille for two reasons. First Kenta hail from Akita Prefecture, and second the featured vegetables had just been delivered from his Prefecture!

This one was called Early Spring Millefeuille for want of a better name as it was actually ordered in March!

Note that the shari/sushi rice had been flavored with 1-part red rice vinegar and 9-part normal rice vinegar. The fish on top is hirame/flatfish garnished with avocado. The “outer garland” is made of akami/lean maguro and tamagoyaki/Japanese omelet cubes!

This is the one of the two millefeuille I did not order personally!

It was requested by two ladies who sat on my right when they saw my order, BIRUKAWA-MILLEFEULLE-FLOWERS! They ordered the same because one of the ladies happened to celebrate her birthday!

Note the many tiny sushi sushi on top!

A word of explanation: Millefeuille being a French concept, I sometimes used a French name instead of an English one. “Chalumeau” in French means “burner”!

The reason is that most ingredients between the layers of rice, except the rice itself of course, had been first seared! It includes slices of seared kinmedai, a Shizuoka Prefecture fish famous all over Japan!

This one was actually named after another French cake, namely Charlotte, because the rice had been wrapped into thin slices of akami/lean tuna and shake/salmon. The “tail” on top is actually made of seared salmon skin!

I do not need to explain the name of this one!

I named the above “critters” for want of better names because it included “little” animals such as shako/squilla, ebi/prawn and tako/octopus!

Well, I could not call the above “chalumeau” for French “Burner” as I had already used it, so I chose “seared” as once again some ingredients had been processed so beforehand!

I had the above in the middle of the summer.

Fish and seafood, and vegetables do vary with the seasons and Kenta makes a point to use only seasonal products whenever feasible!

A well-balanced dinner by itself!

I called the above “Tradition” because the ingredients were truly traditional with a topping of katsuobushi/dried bonito shavings, a layer of Kazuko/herring roe and another layer of hirame/flatfish!

I called the above “Welcome” as I have always been impressed with the sheer hospitality at Sushi Shokunin Birukawa Restaurant!

The name of the above comes from uzu/whirl suggested by Kenta himself!

The “whirls” are made of thin sheets of cucumber!

This was actually my very first order!

The name “Flowers” is evident when you see “roses” made of akami/lean tuna, shake/salmon and hirame/flatfish!

“Piece Montee” in French means a multiple dessert conceived as a piece of architecture!

It made for a very large sushi serving!

Simply enough, the name “Kaempfer” is a surname of a French customer I had introduced.

He had asked a millefeuille of his own after he saw mine on our blog!

He was so impressed than he could not help sending me its picture!

Vegetarian Sushis : It exists in Shizuoka! 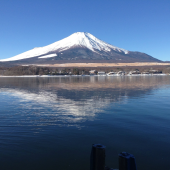