On February 5th in 2015 I had reported on a new Commemorative Fire Hydrant Manhole Cover being installed in Various locations in Shizuoka City to mark the 400th Anniversary of Lord Tokugawa Ieyasu’ss Death. 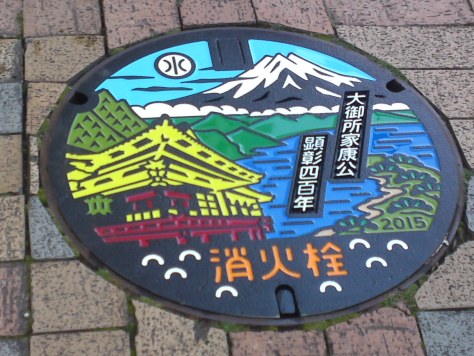 Read more about the above manhole cover HERE

Now, yesterday I noticed apparently the same cover because it seemed brand new!

It is located along the Shichiken Cho Street at an intersection not far from Isetan Department Store!
I soon found why I was intrigued: it was a different cover!

In the upper left quarter a falcon (Tokugawa Ieyasu was passionate about falconry!) had replaced the Kanji character « 水 »for « water »!
The shape of the clouds has also been amended.

The text inside the scrolls had been written black on white (instead of white on black) with a different sentence meaning « Shizuoka City which was loved by Shogun Tokugawa Ieyasu ». Actually the city was called « Fuchu » before he retired there in 1607 when he changed its name to « Sumpu ». It became « Shizuoka City » only during the beginning of the Meiji Era! 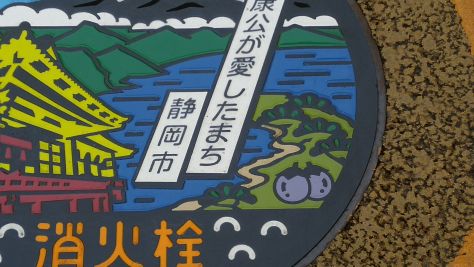 In the lower right quarter the date « 2017 » has been replaced with two eggplants!
Shizuoka City, more precisely Shimizu City before it was merged as Shimizu Ku, is famous for a local eggplant called « 折戸なす/orito nasu » taht Lord Tokugawa Ieyasu was very fond of!
Moreover five pine trees have been lft out the six original ones!

As for the bottom left quarter it has basically been left untouched!
————————————-
Manhole Covers in Shizuoka Prefecture 39): Gotemba City!

A fire hydrant manhole cover type found in the whole prefecture but with the emblem of Gotemba City!
The other day I had the occasion to visit again again Gotemba City in the Eastern part of Shizuoka Prefecture for the first time in many years and could at last manage to check all the manhole covers in town.
They are quite easy to discover as they all within walking distance for the station north exit!

This the main manhole cover symbolizing Gotemba City and remiding visitors that once a D 52-type steam locomotive used to stop there!

The same manhole cover in color (only a few of them!) with Mount Fuji and cherry blossoms!

This smaller valve cover is fairly new and comes into two different types!

The second type!
I wonder what the birds are?

Small white covers with the original design can be found in many places!
Otherwise many other types, both neutral and colored common to the whole Prefecture can be found along your steps!
Good hunting
Manhole Covers in Shizuoka Prefecture 38: Nishigaya Sports Center in Shizuoka City!

Nishigaya Sports Center is located far away, about 30 minutes by bicycle from Shizuoka Station on the other side of the Abe River. That is probably why I never realised they might have, and an ancient one at that, their own particular manhole covers! 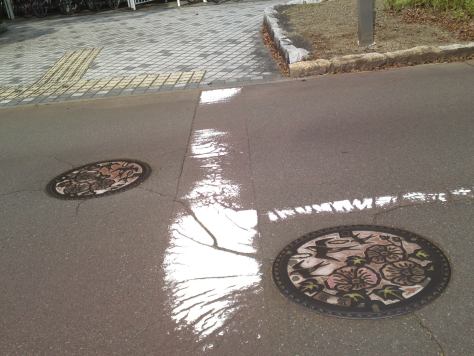 They are all, 21 of them, located in the middle of a street running along the sports center (none were found near the baseball stadium, though). There are two types,most often in pairs, although of the exactly same design.
They were probably installed in 1990 when the Sports Center was completed, making them very old by Shizuoka standards! 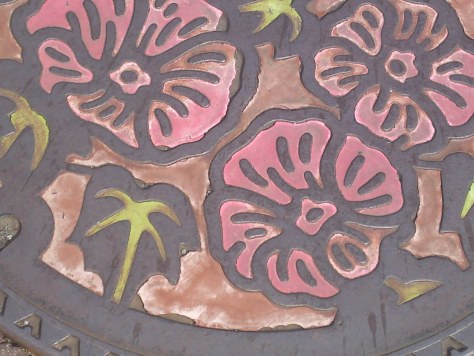 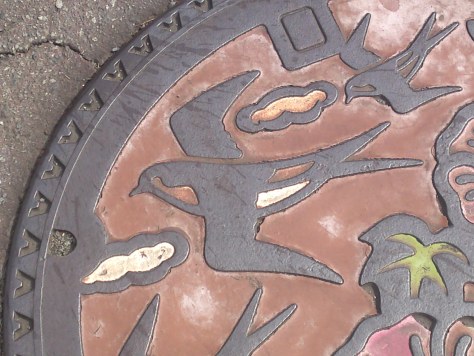 A « Tsubame/燕/Swallow », one of the two Shizuoka emblem birds (the other one is the kingfisher)!

The « Osui/汚水/spent waters » type!
I have a strong hunch they will soon be replaced so keep an eye on them!
————————————–
Manhole Covers in Shizuoka Prefecture 37: The One That Will Never Appear On Shizuoka City Streets!

Last Friday the Shizuoka City Water and Sewers Department were holding an unusual and very instructive exhibition to make the public aware of their work from manhole covers to the functioning of toilets with a strong accent pn public hygiene! 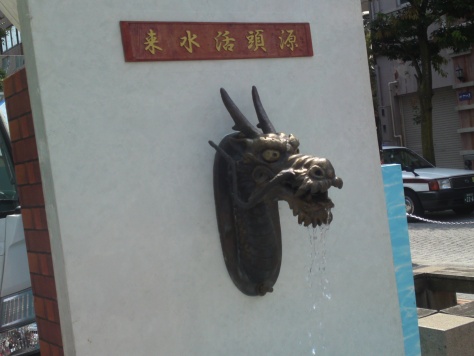 Visitors were greeted with two of these public water spouts in shape of dragon head! 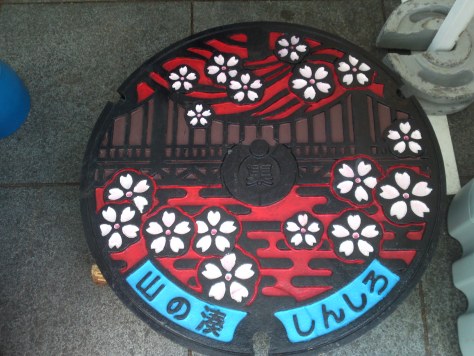 Quite a few fire hydrant and waterways manhole covers in their mint form were on display including a guest in the shape of a flowery design from Aichi Prefecture! 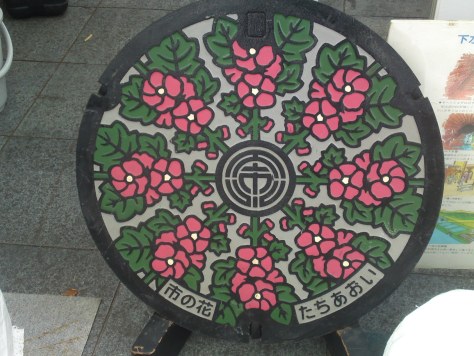 of course the hollyhock, emblem flower of Shizuoka City (for waterways) was exhibited!
Actually there exist more than 8 types of the same design!

There was also a mint of a fire hydrant manhole cover from Shimizu City before its merger with Shizuoka City!

The start display was of the three most recent fire hydrant manhole covers in Shizuoka City! 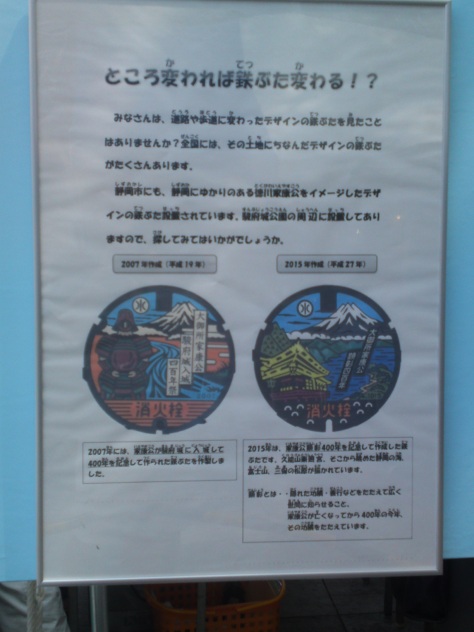 I have described those two in recent articles!

This one was minted in 2007 to commemorate the 400th Anniversary of the retirement of Lord Tokugawa Ieyasu to Sumpu (the old name of Shizuoka City!)! 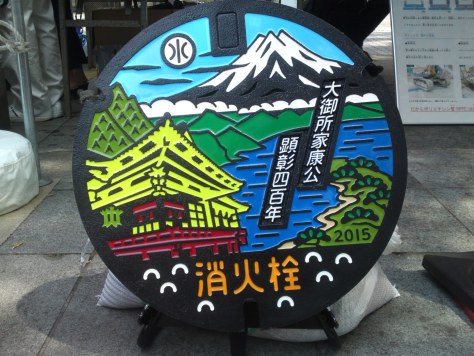 This was laid on February 24th this year to commemorate the 400th Anniversary of the Death of Lord Tokugawa Ieyasu in our city! 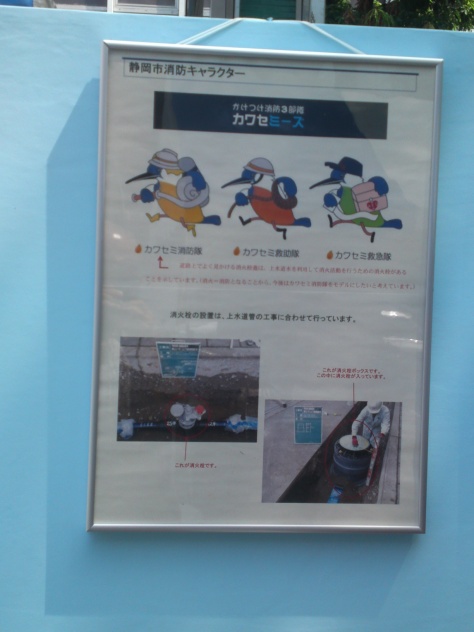 These are the very newest designs to be laid in Shizuoka City!

The character on all three designs is a kingfisher, the emblem bird of Shizuoka City!
But unfortunately it will be some time before we can admire them in our streets! 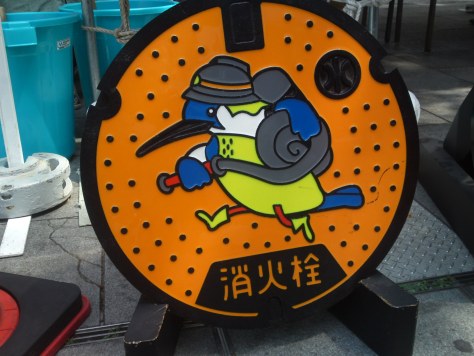 This is the mint of a firefighting kingfisher!
When I asked the civil servants where we could them, they first replied they did not know exactly.
Later they were kind enough to meet me again with more of their colleagues who were actually extremely helpful and kind.
The story is we will never see this particular design as it was found out the surface would become too slippery when wet. Therefore this has become a mint proof that will ot be reproduced.
On the other hand the city is re-designing the cover to improve its safety but no one knew when they would appear yet!
A rare find if there is one!
Great for my collection until we see the new ones!
It would be a sham not to discover them as they are so cute!
——————————————————-
Manhole Covers in Shizuoka Prefecture 36: Fuji City, Yoshiwara, Honcho! 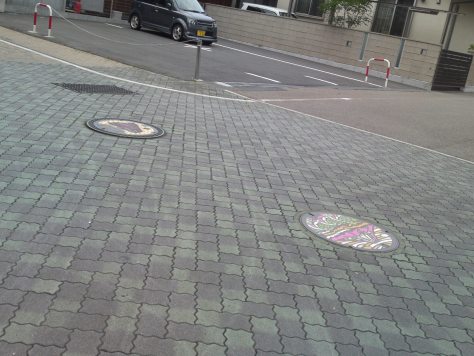 With all the mergers enacted these past years, it has become difficult to explain locations in Shizuoka Prefecture!
Yoshiwara is now integral part of Fuji City but its JR Railway Station is distinct!
First get off Yoshiwara Station and walk to the private Gakunan raliway Line Yoshiwara Station and board a train to Yoshiwara Honcho Station (bear mind that many stations have very similar names!).
Walk towards Honcho Street. 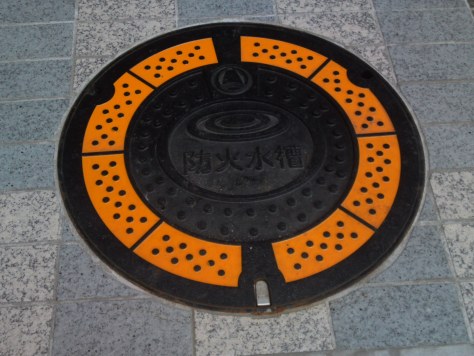 Keep your eyes open as you will discover all kinds of manhole covers, mostly fire hydrant covers either of geometrical designs or full designs either plain or colored, either on the pavement or on the very street! 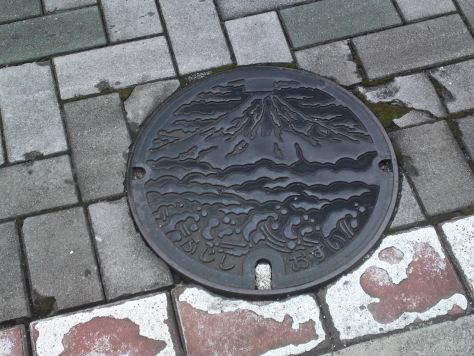 The same in a smaller type!

But the real discoveries are to be made along the street parallel on your right you will reach by discovering the Tenjin Shinto Shrine/天神社 at the first intersection! you will find the first remarkable manhole cover right in front of the shrine gate!

What is this one!

« Kaguyahime/かぐや姫/The bamboo Girl Legend », the manhole cover generally considered as the most beautiful in Japan, complete with Mount Fuji! 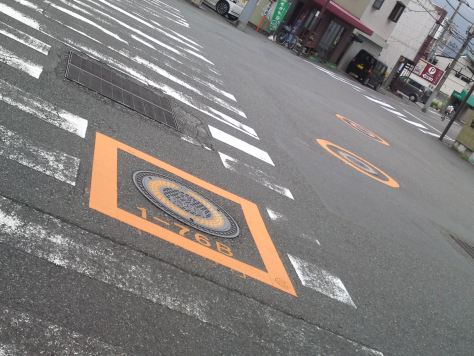 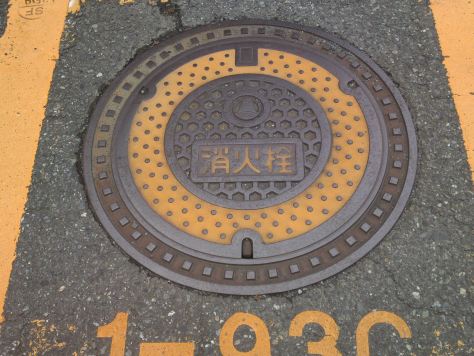 Another fire hydrant manhole cover! These are often surrounded with a square yellow frame for better sighting at night!
This design is pretty common all over Japan, but a small crest design will tell you the exact location! 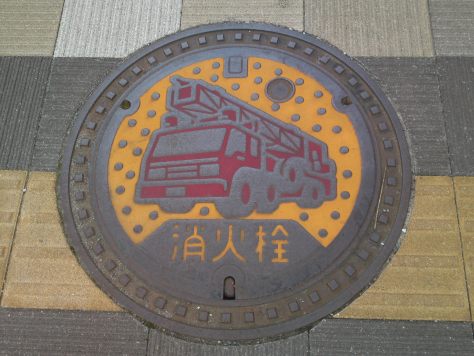 A beautiful fire truck design, also pretty common throughout Japan but once again the small crest design will make the difference! 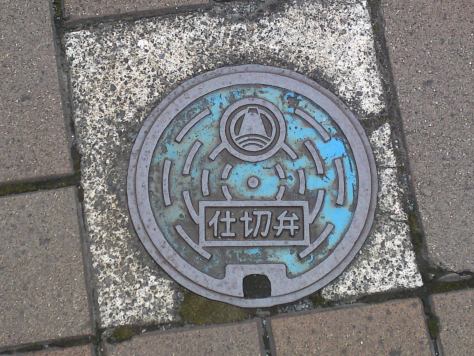 Don’t overlook the small gas valve covers as they sometimes have all kinds of designs!

Another one still with same crest design!

This one is from the Shizuoka Gas Company found all over the Prefecture!