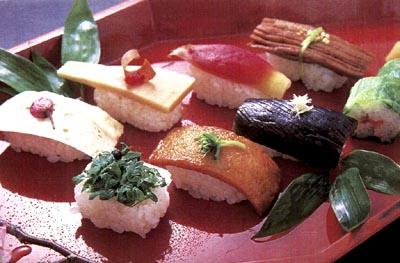 Here are other very typical examples of sushi fit for Vegetarians and even vegans!
So next time you are planning to eat sushi, come armed with your knowledge and tease your favourite sushi chef with it!

Although I’m not a vegetarian nor a vegan, I do understand the needs of people with different regimen and always try to inform them about gastronomic options available in Japan and Shizuoka Prefecture.
Now, sushi for strict vegetarians or vegans exist as sown in those two pictures I took yesterday in a very small but famous Sushi Restaurant called Sushi Iroha in Iwata City, south of Toyoda JR Station.

Next I was served a sublime creation concocted with Ebine Imo/Ebine Tuber served mille-feuilles style intersped with sushi rice and presnted with dashes of olive oil, seame oil/goma abura and soy sauce/shoyu.

One can easily eat whale meat at Sushi Restaurants In Shizuoka Prefecture or even buy it directly at supermarkets.

Most of it come from Sperm Whales/Mako Kujira.
Whale meat should not be confused with Iruka/Dolphins whose meat has appeared on Japanese tables since times immemorial. It concerns an entirely different taste and cooking.

Whale meat can be appreciated in various form:

“Kujira Tataki”, that is whale meat cooked in small cuts ready for sashimi.

“Kuijra Seikyoyaki”, a Japanese way of cooking and serving cut to be eaten with hot rice, or even instead of a beef steak.

As Sushi, it does come in many guises to accomodate various parts.
Each region has its own traditional ways and presentations.
Incidentally, whale meat is safer than any meat from land animal, as it is purely biological!

I fully understand this article will not be appreciated by some people, but do not expect me to apologize for whatever reasons!
I would like to to remind short memories that whales were practically decimated from (under) the surface of this world in the 19th Century by US and European whalers for their oil used in lamps. When the US in particular realised that they were quickly running out, they pushed for mineral oil exploitation with the economical and political consequences we are still suffering from. In short the ovekilling of whales is the direct cause and link to wars in the Middle East.
Last but not least, who and what was Commodore Perry after all?
A whaler! The US had had promoted a common whaler captain to the grand rank of Commodore for the political and diplomatic needs of the time as he happened to ply his trade in nearby seas!
I mentioned that whale meat is safer than beef. Incidentally, who practically exterminated bisons as a policy for driving Indians (Amerindians) out of the way and now makes a big deal of protecting them?

I’m sorry to disappoint you all, but for once this posting is not edible as they are erasers!

I had wanted to visit a certain Sushi Restaurant in Hamamatsu City since I discovered “Sushiya No Neesan” Blog (Japanese).
My wish was finally granted last Friday, December 14th when I managed to get an evening free after University in Fukuroi City.

Suehiro-Hamanako no Megumii Aji (Suehiro-Tastes from Hamana Lake) is conveniently located at short distance from Hamamatsu JR Station South exit (only two tarffic lights away).
It is a very traditional Sushi Restaurant. It was converted into the present establishment from a Japanese Restaurant 28 years ago by the second-generation owner, Mr. Katsuhisa Yokota presently ably helped by his daughter, Chisako, who literally grew in the restaurant, learning her trade by daily observing her father’s skills.

Since this was my first visit I opted to try my favourites and gradually order recommended tidbits.
I started with some succulent “shirako” (male cod sperm sacs. This is the real translation, not whiting as some people prudely call them…) with ponzu vinegar and momiji oroshi/grated fresh daikon with chili pepper.

This particular Sushi Restaurant for its “fugu”/globefish. I chose to have it deep-fried/karaage. No need for chopsticks. Just eat with your fingers and lick them. I was offered chopped boiled globefish skin with it and I had to use chopsticks, then (LOL). Certainly better than your fish and chips!

Back to raw fish, I asked for hirame sashimi/sole-flounder. That disappeared quickly, I can assure you!

keeping an eye on what was on the counter, I noticed a large dish full of unagi kimo/eel liver simmered Japanese-style by Mr. Yokota. Absolutely perfect with Japanese sake!

I was going to switch onto the traditional kampyo maki/dried gourd shavings and negi toro maki/finely chopped leeks with tuna, when I was offered a dish perticular to Hamana Lake District: Haze tenpura. “Haze”, or goby is a small fish caught in Hamana Lake at low tide. It is best eaten as tenpura (with your fingers) with a little salt and pepper.

All right, I fanlly had to call it a day, what with the local sake from Hana no mai Brewery (Hamamatsu City). I had a train to take back to Shizuoka City. But it will be a short time before I visit the place again to try the other morsels!

The Shizuoka JR Station is slowly turning into a better quality gastronomic spot, a boon for travellers in a hurry. I have already mentioned in other postings that Asty has shops catering for all ages and genders.

Now, if it is sushi and Shizuoka Prefecture sake you are aiming for, pay a visit to Uogashi Sushi Restaurant at all times of the day.
Uogashi Company originally hails from Numazu City, a major fishing port in Japan. Which means that they can provide their many restaurants with higher quality at a lower price. They also offer another bonus as they also include fried/cooked seafood and oden in their menus.
On our way back from Shuzenji on Thursday, November 29th, my better (worse?) half and I decided to take advantage of the place as it saved time and money.

We particularly appreciated their deep-fried oysters and mambo fish (above picture).

Their “all-maguro sushi set” was a real bargain regarding size, quality and price.

Foreigners will be glad to learn about their special “maguro roll”. I’m sure Allison will appreciate the thin slices of tuna, hame and lettuce rolled together, cut and served with wasabi and seasoned mayonnaise!

Finally youwill be able to sample the sake from seven Shizuoka Breweries, including the private brands for Uogashi only by Hana no Mai and Oomuraya Breweries