The traditional daifuku, like all Wagashi are vegan in concept.

But Daifuku comes in many varieties.
The most common is white, pale green or pale pink colored mochi filled with anko.
These come in two sizes, one approximately the diameter of a half-dollar coin, the other palm-sized.
Some versions contain whole pieces of fruit, mixtures of fruit and anko or crushed melon paste.
Nearly all daifuku are covered in a fine layer of corn or taro starch to keep them from sticking to each other, or to the fingers. Some are covered with confectioner’s sugar or cocoa. 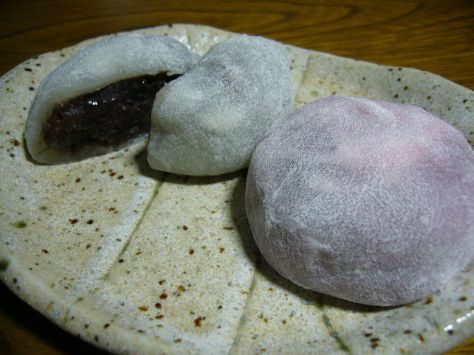 HISTORY:
Daifuku were originally called Harabuto mochi (腹太餅) (belly thick rice cake) because of its filling nature. Later the name was changed to Daifuku mochi (大腹餅) (big belly rice cake). Since the pronunciation of Fuku (腹) (belly) and Fuku (福) (luck) is the same in Japanese, the name was further changed to Daifuku mochi (大福餅) (great luck rice cake), a bringer of good luck. By the end of the 18th century, Daifuku were gaining popularity and people began eating them toasted. They were also used for gifts in ceremonial occasions 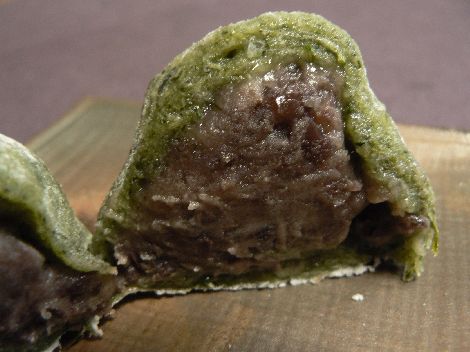 Yomogi daifuku (蓬大福)
A version made with kusa mochi (草餅), which is mochi flavored with mugwort. 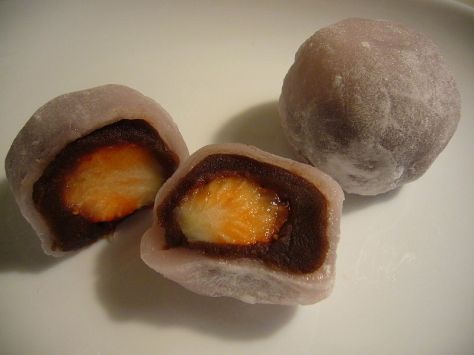 Ichigo daifuku (イチゴ大福)
A variation containing strawberry and sweet filling, most commonly anko, inside a small round mochi. Creams are sometimes used for sweet filling. Because it contains strawberry, it is usually eaten during the spring time. It was invented in the 1980s. Many patisseries claim to have invented the confection, so its exact origin is vague. 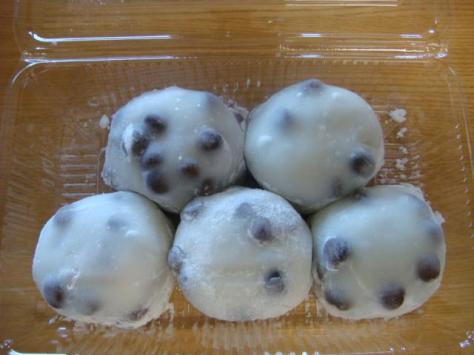 Mame daifuku (豆大福)
Another variation made of mochi mixed with red peas or soy beans.