Toshiyaki Horie (extreme right) with his father and employee

Shizuoka is probably more famous for its high quality chicken outside than inside the Prefecture, but the locals are beginning to realize what kind of treasure they have been sitting on all that time! 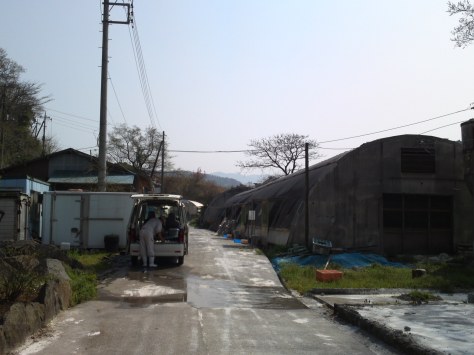 The reason that Shizuoka people don’t know much about their avian treasures is that such high quality chicken has to be raised away from the cities, in altitude and in close contact with the nature for rigorous hygienic conditions. 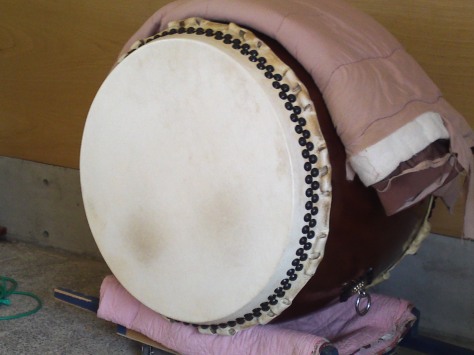 We conducted the interview before paying a visit to the chickens inside a visitors room Toshiyaki had been himself where I discovered his hobby: drum/taiko/太鼓 making! 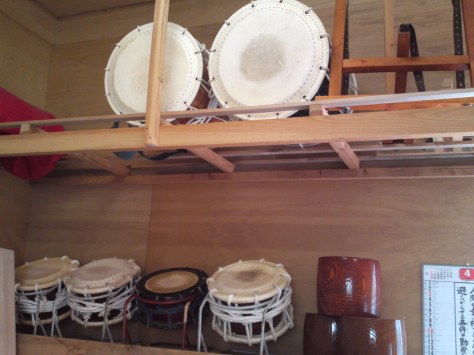 Third-generation farmer Toshiyaki (33) made all these by hand from scratch. Playing the drums is a good past time that keeps him fit for a work that requires constant attention!

Ventilators for the summer.

Toshiyaki’s father started raising shamo/軍鶏 chicken, originally a species from Thailand, 23 years ago.
Whereas their chickens are labeled Amagi (from Amagi Plateau) Shamo, they are a species derived from the Ikkoku Shamo/一黒軍鶏 raised in the Western part of the Prefecture.
They are raised from just-born chicks sent by Hoshino Chicken Farm in Shimada City.
The main difference with their cousins in the west is that Toshiyaku adds natural food to the usual grain feed such as wasabi leaves (Izu City is the largest producer of wasabi in Japan) and soy milk from a local tofu shop. Their water comes from a river raging down just along the farm. Moreover, the hygiene is strictly maintained with soil between the shacks being cemented over and regularly spread with liquid chalk.
They keep the chickens in four different locations according to their age. Every time they move one age group, all the soil on which the chickens live is moved and renewed entirely. The removed soil will find its way into the natural fertilizer shack to be sold to local farmers. 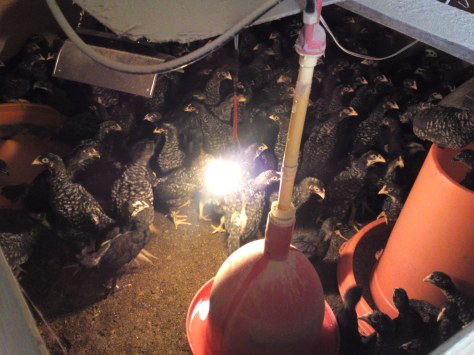 The chicks will be kept in enclosed areas until 30 days old as they have to be kept warm then.
Incidentally, I had to take the pics without a flash as the chickens must be kept free of any stress! 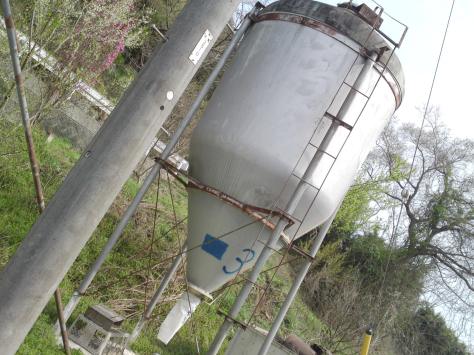 They will be moved to another shack until 60 days. They will be inoculated once during that period.
The total number of chickens is around 3,000 at all times, half of them male.
Toshiyaki has also started selling their eggs 3 years ago. 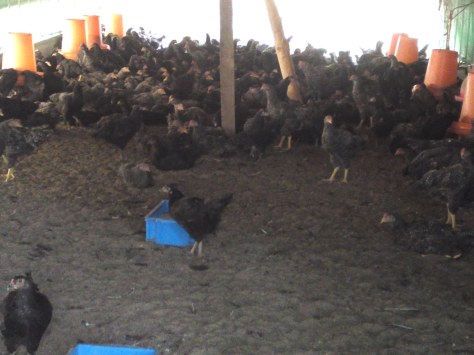 They will be moved to a third shack until 90 days old. Males and females will be separated then. All the chickens will be vaccinated a second time before being moved to their third shack. 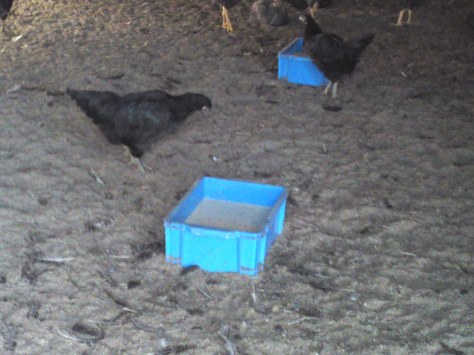 The blue container is filled with soy milk. 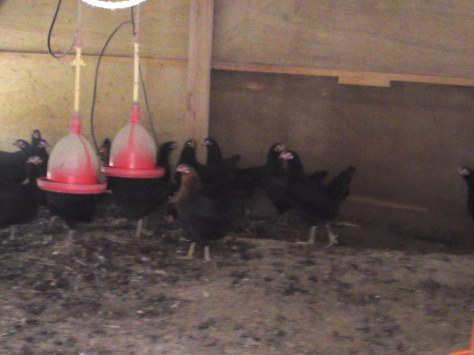 Female chickens.
They will be culled between 120 and 150 days,
This is hard and very precise work. Except for the taking of their feathers done in a water-filled spinning machine, all has to be done by hand from bleeding (unavoidable or the meat would irremediaby spoiled) to dressing. Their livers and hearts and shirako/白子 are all delicacies that have to be of the uttermost cleanliness. Raw Amagi Shamo sashimi and livers are a delicacy in Shizuoka Prefecture! 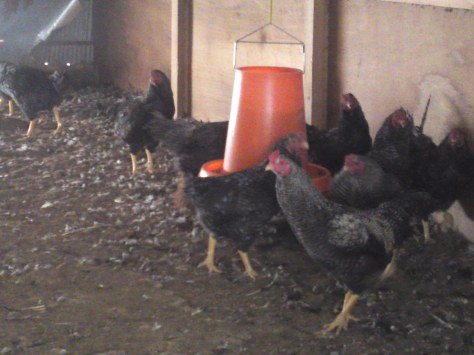 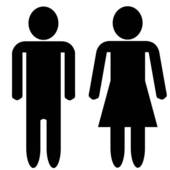 I have to keep regularly to Tetsuya Sugimoto Restaurant as his ingredients are seasonal and nothing else!
As today is practical for a light lunch I visited him a bit late on purpose to have ample time to report. Tetsuya does not mind at all and actually always welcome the chat! 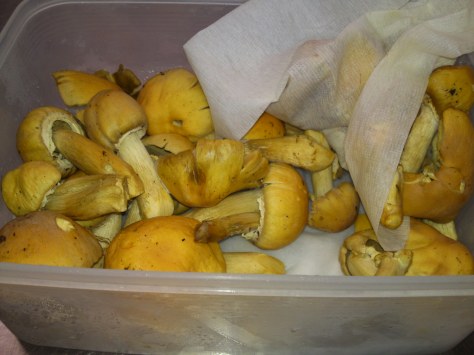 As there was no real local meat around, we kept it purely to vegetables.
He didn’t say he had that many form Shizuoka, only to show a dozen Tupperware to choose from!
Now, the mushrooms above are wild ones from Fujinomiya City’s vicinity at the foot of Mount Fuji!
They are called “Shougenji” mushrooms. And these were bigger than the cultivated variety!

Tetsuya Sugimoto is quickly turning into the Alain Passard of Shizuoka!
So he started “shopping” among the incredible (and he said small!) array of his vegetables.
The above are organic chayottes (hayato uri in Japanese)f from Hamamatsu. 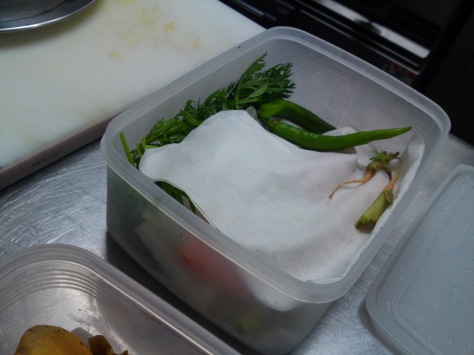 His vegetables and all other ingredients are stored with such great care!

Now, can you guess what this vegetable might be? If you can, you owe my respect as this was a first for me!

Rice stalks or “ine” in Japanese. These are grown that thick on Amagi Plateau in Izu Peninsula!. The thick core is very easy to cook!

Look at these! All from Shizuoka Prefecture and organic to boot!

The other vegetables included:
Lotus root (“renkon” in Japanese, slightly boiled preserved in its own water) from Asabata, Shizuoka City
Winged Bean (“Shikaku Mame”) from Hamamatsu City
White and violet “Mabiki” Daikon, Tsurumurasaki and Carrot (“Ninjin”), all from Matsuki Biofarm at the foot of Mount Fuji!

The vegetables were first slowly fried with some white butter and a minimum of water and covered with a lid to prevent the juices to evaporate. 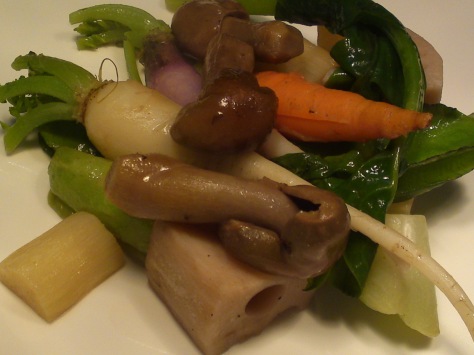 The vegetables were taken out in order according to their size and softness.
A minimum amount of water was added from time to time to help the larger vegetables to cook properly.

A lttle butter was added to liaise the sauce made up of the vegetables juices only as well as a little salt and a little lemon vinegar. Nothing else!

In front of me!

Testuya told he is going to scour the Izu Peninsula in search for seaweed varieties (Shizuoka has the largest number of varieties in Japan!) to create a vegetarian marine cuisine! 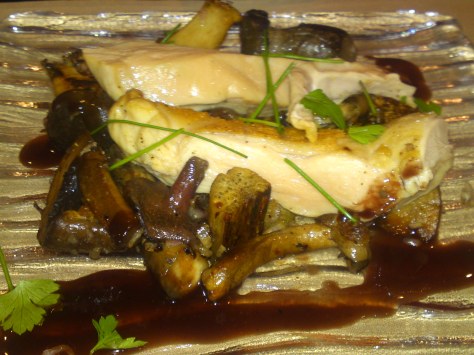 I suppose I will have to repeat myself again and again, but If you happen to visit Shizuoka City, you will find many restaurants and izakayas serving and mainly using produce/products and ingredients from Shizuoka Prefecture. There are many treasures to be discovered in this hoard!
One of them is the French restaurant going by the name of Tetsuya SUGIMOTO!

Now, Mr. Sugimoto is always looking for the best and the best only in our Prefecture.
This particular dish was made with a superb chicken called “Shamo/軍鶏, more precisely Ikkoku shamo/一黒軍鶏, a variety of Shamo Chicken raised in Central and Western Shizuoka Prefecture. 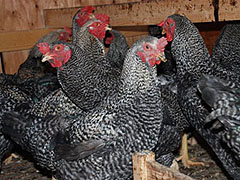 M. Sugimoto used chicken raised in Makinohara/牧の原 in the south-central part of our Prefecture.
These chickens are fed along very strict rules, with only natural feed. Their coops are at least 1 meter above soil and maintained as the healthiest environment as possible.
They are culled usually at 130 days when they reach 4 kg for the best quality.

Their meat has no “fibers” or unwanted smell.
Their meat contains less water and more nutrients than usual chicken. They can be served raw as sashimi in all safety.
Their flesh is extraordinarily tender and soft. and their skin delicious when fried thin and crispy.

Mr. Sugimoto first fried thick breast slices on their skins over a thick skillet and then finished them in the oven.
The sauce was made with the juices of the chicken, wild mushrooms and Sherry vinegar.
The mushrooms are all wild Japanese mushrooms!
A superb dish for the Fall/Autumn! 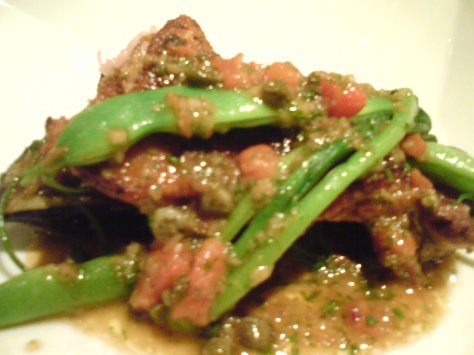 This is the “second part” of my previous lunch at Pissenlit.
As it is not fit for vegans or vegetarians, I kept separate, although organic vegetables do figure in this great gastronomic experience! 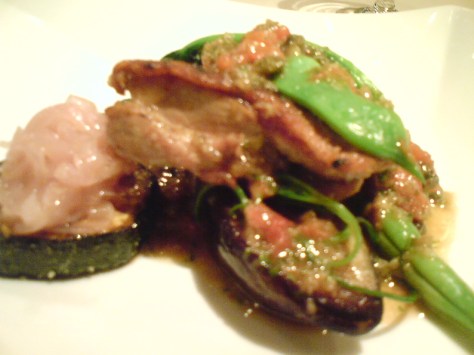 As for the meat, it is roasted chicken.
But the chicken is very special: Of the shamo/軍鶏 variety, it is some some of the best chicken available in this country.
Moreover, it was kept in a natural habitat in Umegashima, up in the mountains near the source of the Abe River, and fed only with natural food.

As for the vegetables, they are all organic.
The onions on the zucchini slice are confit, and the sauce is Provencal in concept with high quality EV oil and local tomatoes, garlic, and so forth.

The chicken breast with its skin roasted to crunchy perfection was placed atop a grilled slice of aubergine with Okahijiki, Komatsuna and Morokko Ingen/large string beans, all organically grown in Mishima City by Mr. Hideyaki Hirooka. 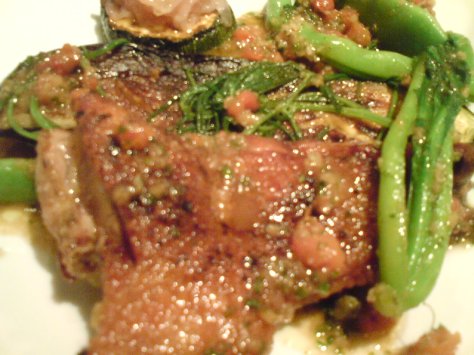 An “internal” view of the dish!