Takaashigani/高足が二, literally meaning “Tall Legs Crab” is the largest crab in the and is caught almost only around Japan especially in the Suruga Bay In Shizuoka Prefecture and Izu Islands, but numbers of the crab have diminished over recent years, and there are many efforts to protect them. In Shizuoka Prefecture, people even help them grow from the eggs before returning them to the sea!

The Japanese spider crab has 10 legs. The front two legs have been adapted into claws. It has an orange body with white spots on its thin legs. In males, the limbs on which the claws are located become longer than its other limbs, and a large male can widen them to more than 3 m. The oval-shaped and vertically rounded shell can reach 30 cm in width and can be up to 40 cm long. The compound eyes are situated on the front, and two thorns stick out between them. Younger specimens feature hair and thorns on the shell, and their frontal horns are longer, but these gradually atrophy as the crab ages.

In Japan it is considered a delicacy and prices can easily jump!
The Japanese spider crab is caught using small trawling nets, and is often eaten salted and steamed. 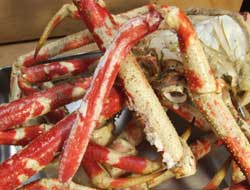 Interestingly enough, when bolied/steamed, not only the shell but also the flesh turns red. 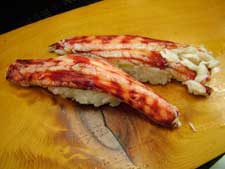 They do make for impressive sushi!