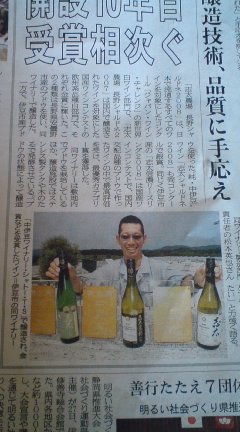 After 10 years of existence, Naka Izu Winery Chateau T.S. has finally recevied the accolade of wine lovers in Japan!

Both wines made use of a Chardonnay grape strain originally developped in Nagano Prefecture, our northern neighbours.

On the other hand, another white wine made from Chardonnay grape strain developped in Izu City, Shizuoka Prefecture, called Shida Chardonnay won a silver medals in both contests.

The winery grows all its grapes and the wine is aged either in their own stainless tanks or wooden casks depending on the variety, making a real local winery.
Actually, until 1958 wine was produced in many parts of Shizuoka Prefecture, especially near Numazu City and in the Izu Peninsula, but disappeared when the government decided to support sake instead with very substantial subsidies.
Naka Izu Winery is still the only winery in existence in Shizuoka Prefecture.

About time to interview the winery and taste its wines!