“Sayogoromo no Uta/The Light Night Veil Song”! Call a Japanese friend to translate the label. It is worth it!
And the sake is also worth a long conversation as it it is practically untouched/adulterated in its making! No pure alcohol or water added!

Clarity: Very clear
Color: Very faint golden hue
Aroma: Light, dry. Pears
Body: Fluid
Taste: Well-rounded dry attack with assertive junmai petillant.
Both complex and straightforward at the same time.
Pears and nothing else apparently!
Disappears quickly on a dry note.
Turns on a drier note with food with more junmai petillant.
Elegant in spite of its high alcohol content that tends to be dangerously forgotten!

Overall: Another Morimoto Brewery nectar off the beaten tracks of Shizuoka Prefecture or whatever traditions for that matter!
Chilled, makes for a superb aperitif, probably the best compliment to be made to any sake!
For special people only!

The toji/brewmaster at Shidaizumi brewery in Fujieda City is of the Noto School, that is from Noto Peninsula in Ichikawa Prefecture.
Ichikawa and Shizuoka Prefecture sake arevery similar in concept and many are made for sake tasting competitions.

plenty of explanations but this is the very top!

Clarity: Very clear
Color: Faint golden hue
Aroma: Fleeting, elegant. Rice
Body: Fluid
Taste: Soft well-rounded attack backed up by junmai petillant.
Abruptly turns to a very dry note at the back of the palate upon swallowing.
Complex:
Pears, hints of green apple, grapes. Late appearance of dry nuts.
Elegant and sophisticated. There is no point to drink it with food although it changes little.

Overall: A sake obviously conceived to be tasted on its own.
A great and so elegant aperitif when chilled.
But is eminently enjoyable at any temperature.
A sake to impress your friends or important people!

Morimoto brewery is not only “notorious” for its sake away from the general Shizuoka trend but it also produces extraordinary “koshu/old sake”!

But the more extraordinary is that that particular koshu had been matured at room temperature for the last 12 years!

And there were only 3 bottles left in the whole brewery!

Overall: A rare treat as usual!
To think that every year sees a new sake crafted to be left in the same spot for years and years!
Makes for the perfect aperitif although it would definitely make for a very dangerous proposition late at night!
For connoisseurs and gastronomes only!

May is our ‘tribute to the hop’ month and we are pleased to announce the release of two more wonderful hop-character seasonal brews: Fire in the Belly — Doug’s Red Ale and Belgian Pale Ale.

Doug Benning was what we would consider a ‘founding customer’ in our Fishmarket Taproom. He first made an appearance the second or third weekend of our operation, visiting together with his wife, Miyuki, and fellow ‘founding customer’, Jason Block. That Doug was a curiously inquisitive and passionate person was revealed to Sayuri and me within minutes. That he was to be a life-long fan of the Taproom and Baird Beer, a future owner-partner in our business, and, most of all, an intimate and fiercely loyal friend, became apparent over the coming months and years.

Sadly, Doug passed away one year ago today, in a fashion as sudden as his life was intense. I understood Doug’s intensity perhaps better than most; we shared what my mother would have called ‘fire in the belly.’ We love Doug and Fire in the Belly is our beer memorial to him.

Fire in the Belly — Doug’s Red Ale is an explosively flavorful ale, richly malty with a bright hop character. The aroma is piny and pungent and comes courtesy of dry-hopping with two American varieties: Chinook and Simcoe. Doug, this Baird Beer is for you!

Pale Ale is the Pilsner of the ale world — myriad versions of it are brewed by ale breweries around the world. In this take, we ferment with our house Belgian ale yeast (a witbier strain) and incorporate a unique blend of fruity, grassy, herbal hop varieties (Galena, Santiam, Motueka, Styrian Golding, Saaz), all of which are used in dry-hopping. The flavor is fruity and full in the mouth, finishing with a very pleasant spicy dryness.

Both Fire in the Belly and Belgian Pale Ale are available for immediate release in kegs as well as bottles (360 ml).

I am a big fan of Belgian-style Saison beers and so is my wife Sayuri. In 2007 I brewed this style for the first time as a birthday present for Sayuri. She liked it so much that we now brew it annually and release it on her birthday. Today is her birthday and we are pleased to release Saison Sayuri 2013.

Saison means “season” and this family of beers is thought to have originated in Wallonia in southern Belgium. Saisons were brewed in the winter at farmhouse breweries for summer consumption by
thirsty farmhands. While there is no exact flavor profile or processing technique that define Saison stylistically, common traits exist (e.g. relatively pale in color, moderate in alcohol, refreshing in a dry or sour type of way, etc.). Often spices and ingredients uncommon to beer but otherwise readily available on the farm are incorporated. Saisons are thus typically Belgian in their funkiness and individuality.

Saison Sayuri is like its namesake — a fascinating admixture of down-to-earth simplicity and understated complexity. As with the 2012 version, this year’s Saison Sayuri is brewed with small spice-like additions of the peels and fresh juice of local aoshima mikan fruit from the local orchard of our carpenter and friend, Nagakura-san. The citrus character of the mikan fruit is complemented beautifully by bright fruit flavors imparted from three varieties of New Zealand hops (Motueka, Wakatu and Cascade). The result is a piquantly quenching brew that still manages a great, albeit understated, depth of character.

Saison Sayuri is available for immediate release in both in kegs and bottles (360 ml). It will be pouring from the taps of each of our Taproom pubs today, May 10, in honor of the birthday girl.

Now, what game are they playing?

No, you are not in Southern France or even New Caledonia if you prefer a nearer destination!
You are on the bank of the famed River Kamogawa in Kyoto! 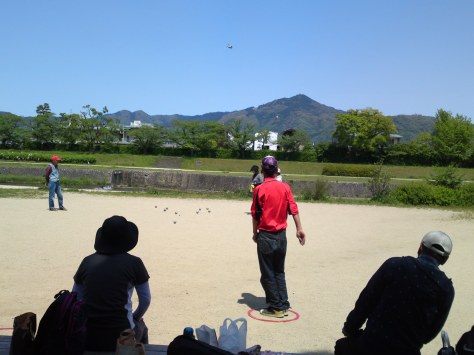 The Japanese, especially senior citizens have the knack to adapt traditional French and other countries’ games such as croquet into “gate ball”.
But I couldn’t hide my admiration when I espied those happy senior citizens spending their weekday afternoon playing petanque exactly like they back home in France!
And they were really skillful at it, especially the grand ladies who would put many a French matron to shame! 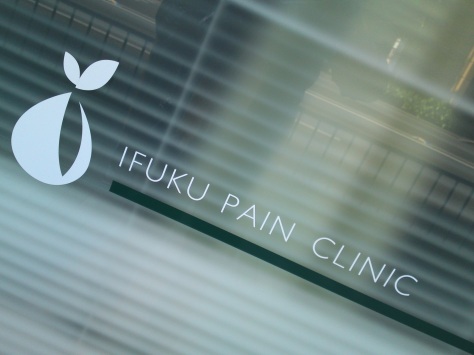 Just came back from a short stay in Kyoto where among the usual great settings i found a few interesting hidden sights!
Have you ever heard of a “pain clinic”? 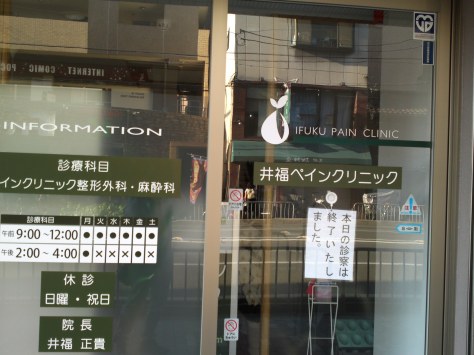 You will discover it on Karasumaru Street.
Dragon, my worst half, explained to me that the establishment meant they are a general practice hospital covering all sicknesses, hence the mention of “pain”!

Bandai Brewery is a bit away from anywhere in Shizuoka Prefecture as it is located in Shuzenji the last stop along the private railway line starting from Mishima City into Izu peninsula.
Its brews are not always easy to find but they have increasingly become worth the search!

All pink presentation for the ladies!

The rice is 100% Homare Fuji grown in Shizuoka Prefecture!

Junmai ginjo is increasingly becoming the norm, proving that the new rice has come of age!

Overall: In the best sense of all a straightforward and eminently pleasant sake, very feminine in approach.
Can be enjoyed at any temperature at any time of a meal and away from a meal!
Bring it to a party and please everyone!

Welcome to May and to Japan’s Golden Week holiday season. We are excited to kick both off with today’s release of two terrific spring seasonal brews: Pawa-Hara Golden Ale and Hop Havoc Imperial Pale Ale.

Last year I learned of a new and interesting Japanese cultural construct which is essentially the polar opposite of bureiko jikan. Japanese call it pawa-hara which is short for “power harassment”. This is a situation in which someone on the top rungs of the hierarchical relationship ladder invites underlings out for a drink and a bite with the express intent of bullying and berating them. Alcohol, it seems, fuels this newly coined social custom too.

Well, if this is going to take place, we feel there needs to be a good beer suitable to the occasion. Our answer: Pawa-Hara Golden Ale. The recipe is pretty much the same as Bureiko Jikan Strong Golden Ale, only a lighter (14.4 Plato) less potent (6.5%) version. The result is a beer of seductive but not overwhelming strength; ideal for buttering someone up for the lambasting to come!

Pawa-Hara is available in both kegs and bottles (360 ml).

As you know, hops are dear to the hearts of the brewers of Baird Beer. We simply love hop character in beer. Last year we designated May as ‘Hop Madness Month’ and released sixteen different varieties of hop-forward beer to celebrate this beloved perennial plant. This year too we will be releasing several hop-centric seasonal brews during the month of May as a gesture of our love. We start off with a hop bomb — Hop Havoc Imperial Pale Ale!

We limit the release of Hap Havoc to once a year as it will take a complete year for the imbibers’ taste-buds to fully recover from the hop assault. The malt bill here is one that would constitute a strong pale ale (starting gravity of 13.7 Plato), but the hop charge is one you would find in a double IPA (85 BUs in the kettle and whirlpool and then double-dosings of dry-hops using a combination of Citra, Simcoe, Sorachi Ace, Centennial and Chinook). Put simply, this is Hop Madness!

Hop Havoc Imperial Pale Ale is available for immediate release in both kegs and bottles (360 ml).

Please mark your calendar and plan to join us for a festive birthday weekend of great pizza and beer. You can learn more details about the weekend celebration as the date approaches by visiting the Nakameguro Taproom blog on our website.