Now, how much did we pay for one night at Suikoen Hotel, thebest one in Sumatakyo, lost in the southern Japan Alps with full dinner, breakfast and onsen bath/hotsprings bath?
130 US $ each, not bad! 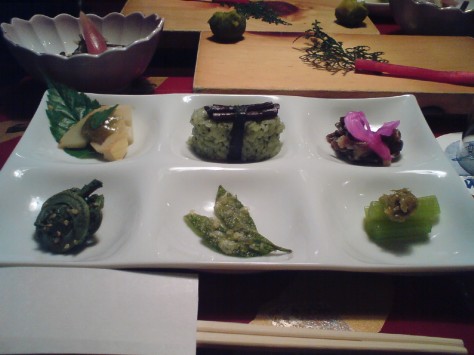 Meals are taken early in Japanese hotsprings hotels.
Ours was launched at 6:00 p.m.!
A plate of zensai/appetizers was waiting for us. I can’t remember all the descriptions as I had no time to jot down anything, waht with being busy the pics (with a mobile phone, which is not the perfect way! Sorry) and the Missus waiting impatiently! 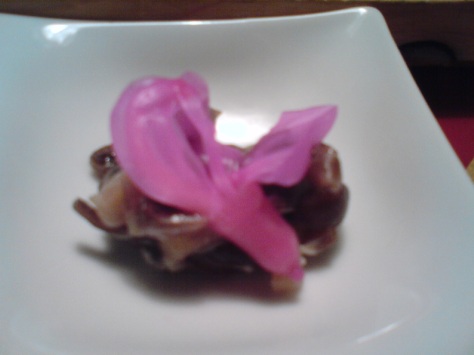 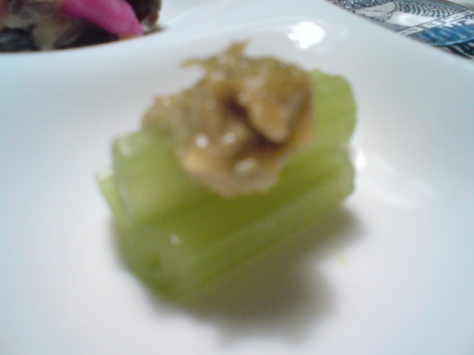 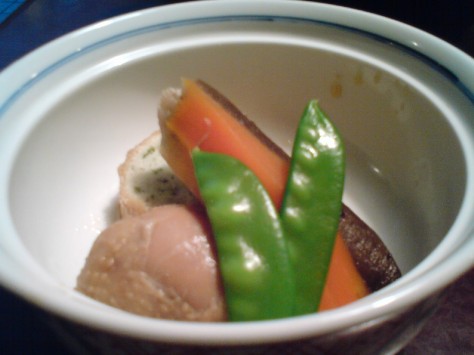 And the procession of appetizers continued with stewed cold chicken and boiled vegetables, 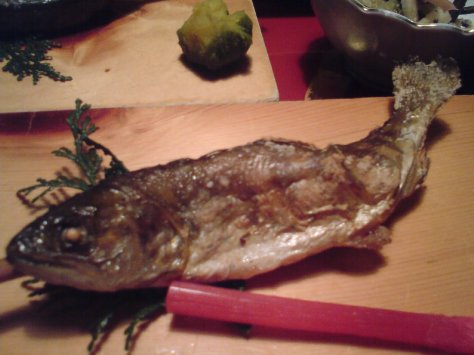 grilled yamame, you can eat the whole!

Japanese-style bbq with pork and vegetables and miso paste, 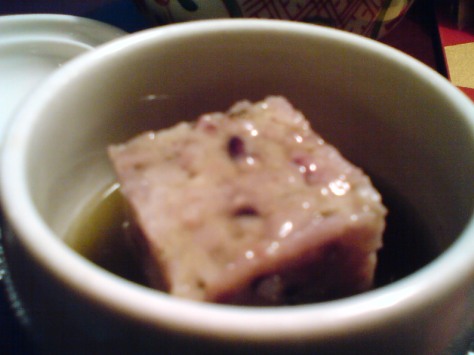 I don’t know too much baout this one. All I know is that it was made with azuki beans, yam and tofu. Very hearty!

Freshly steamed rice is brought inside a double-lid pot, 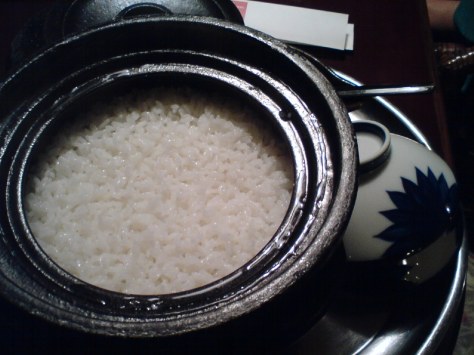 so simple and delicious! 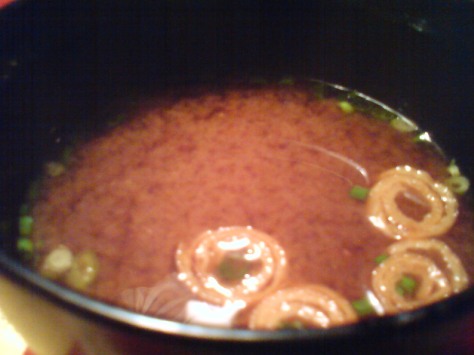 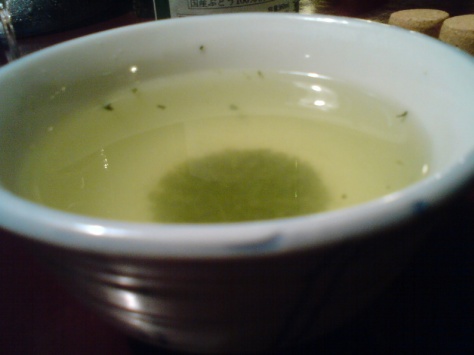 Kawane Green Tea (did I tell you that Shizuoka Prefecture produces more than 45% of all green tea in Japan?)!

before taking our first bath of the day, we took time to admire the carps in the garden pond!

The entrance of the hot baths…

The noren/curtain barring the view of the hot baths for men.
”男” means “men”. Don’t make a mistake!

The noren/curtain barring the view of the hot baths for women/ladies.
”女” means “women”. Don’t make a mistake again!

The “venues are switched every 12 hours. Do be careful and check! LOL 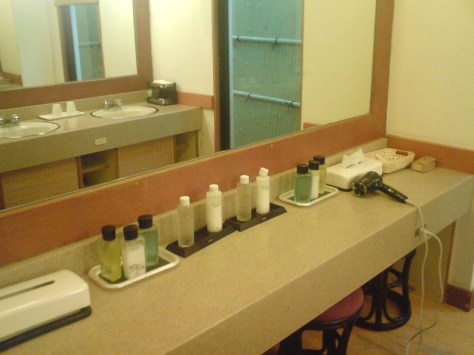 Scrub yourself before entering any bath! 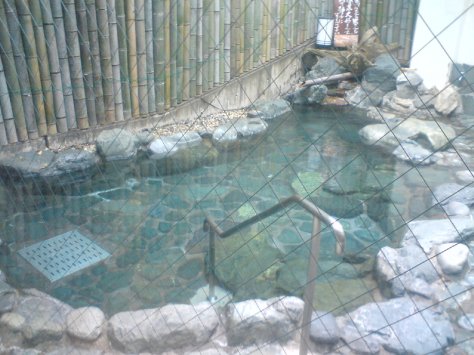 Rotenburo/露天風呂/outdoors bath. A bit small, I must admit!

The relaxation room by the outdoors bath.
Do not trust the scales!

We did dip in the baths the next day before and after breakfast.
The breakfast was the all you can eat self-service style, both European and Japanese style. Above was my first helping (European).

I was really hungry after allthe walking the day before (and more coming on taht day!), I couldn’t help wolfing down another, Japanese-style, breakfast!

The Missus and I finally found a couple of days off work to go to a favourite destination of ours: Hotsprings.
Shizuoka Prefecture is probably the most famous region in Japan for such a venue.
Hotels, Ryokans (inns) and Minshuku (Pensions) can wildly vary in prices, services and meals served, but my other half is a wizard (sorry, witch!) when it comes to find out the best deal out of the Internet.
She planned the whole trip as my experience has taught me it is better this way in spite of all the grumbling (why do I have to do everything?….).
The following three articles are a journal of the two days spent together (in bliss?) along the railway tracks and mountain lanes in search for simple pleasures!

Before buying our tickets, we checked with the small food stand at Kanaya Oi River Railroad Station (ext to Kanaya Station) as they always sell good local ekiben/railway line bento! 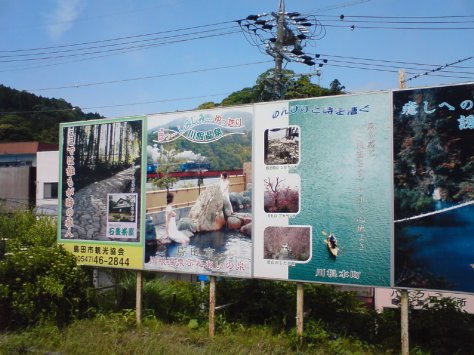 Large signs across the track made sure you knew your destination! 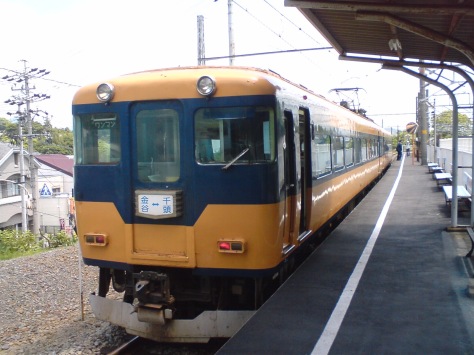 We ignored the SL train as we were planning to board it on our return and instead used the diesel-pulled train. No needt o say that all trains along the Oi River Railroad track are full with trai buffs on week-ends!

That railroad is mainly a single-track line except inside stations (and not all at that!).

My bento box!
I wrote an extensive article at Ekiben/Railway Station Lunch Boxes-Bento 8!

It even contained a postcard! 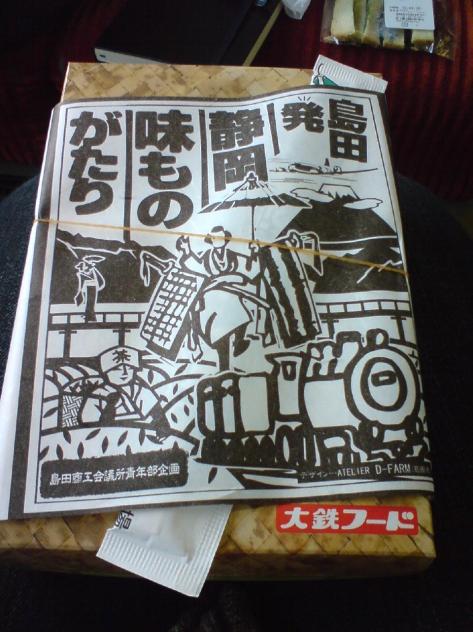 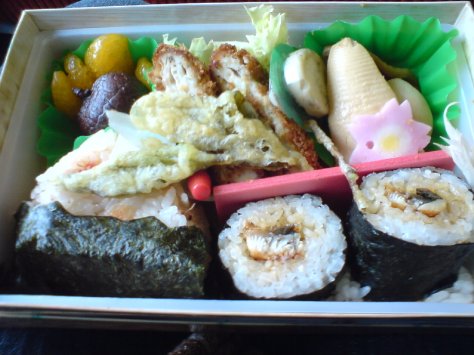 Kawane Green tea to washi it down. Don’t forget that Shizuoka Prefecture produces more than 45% of all green tea in Japan and the area we are going to cross on our way, Kawane, is the major green tea producing area! 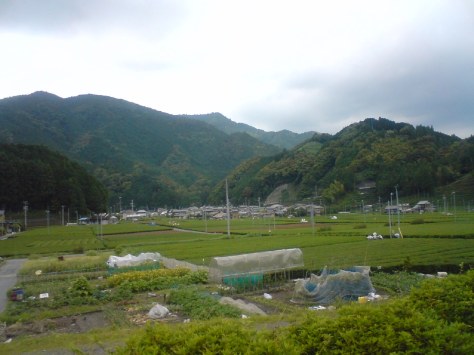 Although the train runs along the Oi River between montains, thereis plenty of place for (tea) farming. 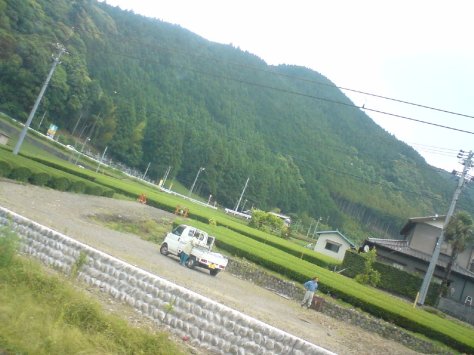 Thisis the season and farmers are busy even on Sunday! You will find very few recreation spaces there as farmers are just too tired at the end of the day! 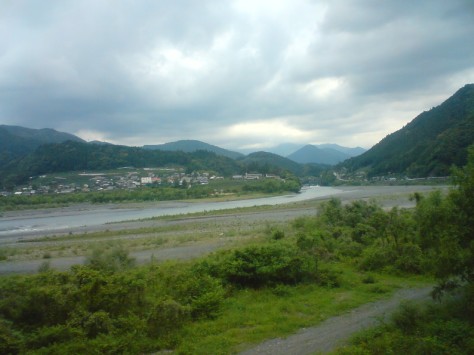 The Oi River has always been a major river in Japan! For once the weather was clement! 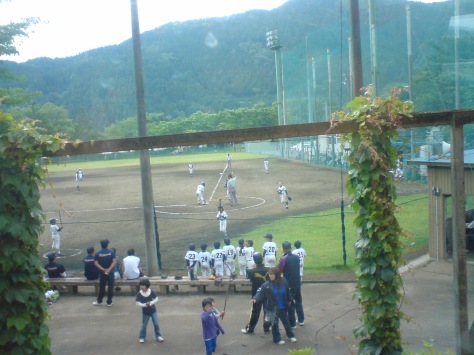 Wherever you go in Jpaan, you will discover ball parks where Elementary School kids are eager to show off thier new uniforms!

We left Kanaya at 10:49 to reach Senzu Station, the last station for that particular train. Nice natural decoration!

A view of Senzu Station, which stands pretty high in the South Japanese Alps!

We had arrived at Senzu Station 12:04 and still had sometime before taking the bus to Sumatakyo at 13:30. We were getting a bit hungry. Luckily we noticed a gentleman grilling/bbqing large yamame!

Yamame (山女 or “Mountain Woman” in Japanese!) is a kind of trout either called Japanese trout or Seema. 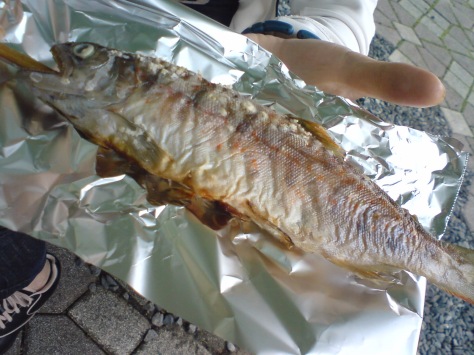 One can either eat wild ones or pond-raised ones. These fat samples are raised in local ponds with in fresh mountain waters. Griiled with salt/shoyaki/塩焼き, they are succulent. You can eat the skin, too!

Almost “next door” to Senzu Station stands a very interesting museum dedicated to sound in their many form, natural or devised.
The place is called Otogi No Sato/Sound Village.
Check their (Japanese) HOMEPAGE.
I was particularly interested in the “percussion faces”. 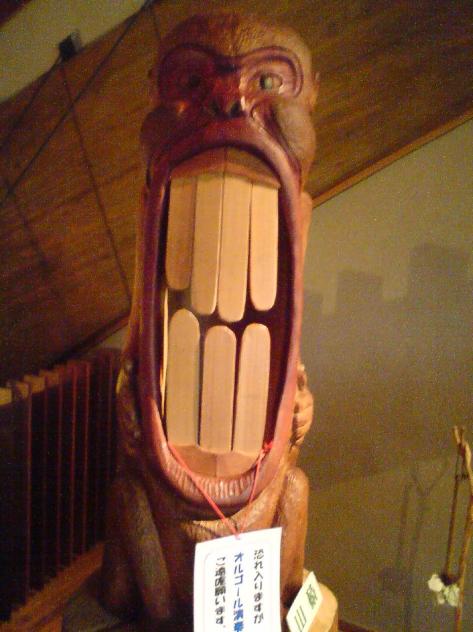 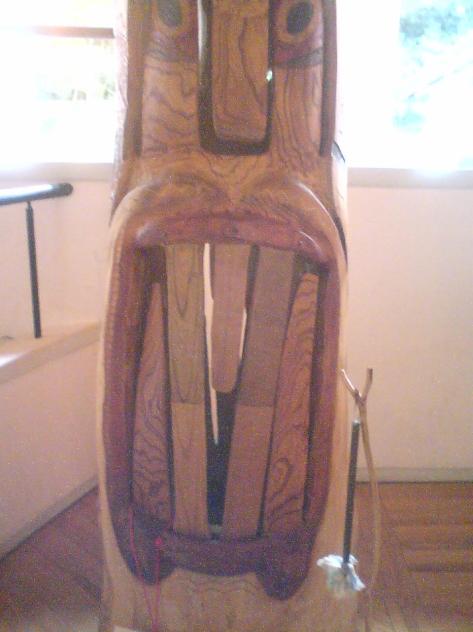 Another one for a music-loving dentist? 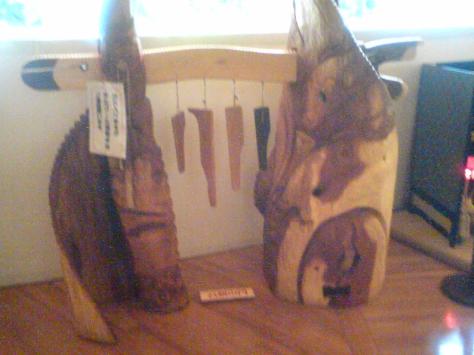 Another one for hard hitting!

We finally reached our destination Suikoen Sap Hotel at 14:10.
Now, who is that lady?
Check the Hotel Homepage for more information (Japanese)!

I can assure you they will never lack water to turn that wheel! 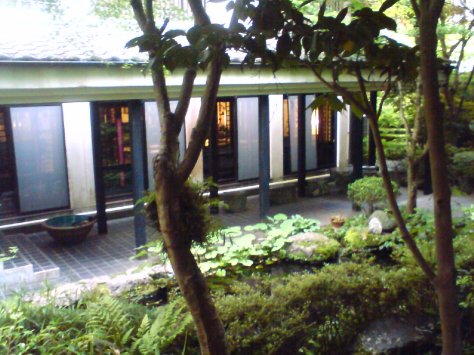 The lobby seen from the inside courtyard.

The same from another angle. 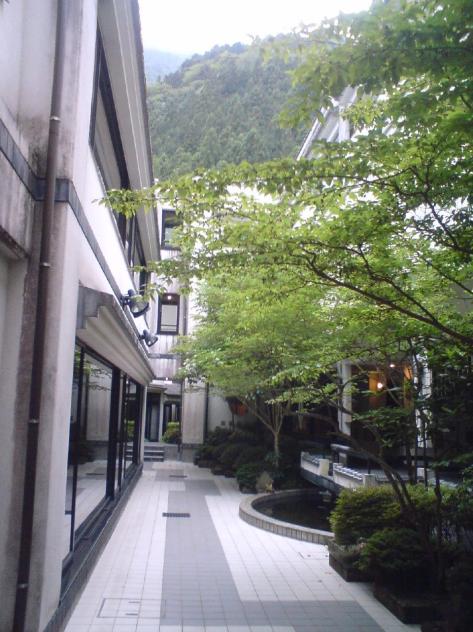 A small but scenic courtyard, indeed, with the nearby wooded mountains. 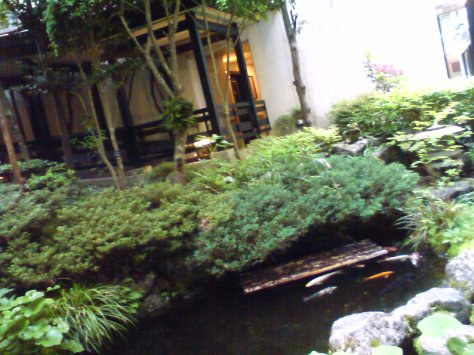 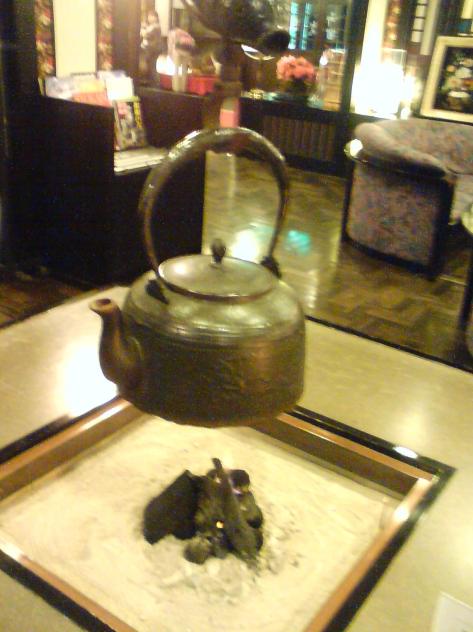 A traditional irori/囲炉裏 with a real charcoal fire!

As we still had plenty of time until dinner (served at 18:00, a bit early by Western standards!), we took the opportunity to visit the locality!

A traditonal minshuku/民宿 or pension.

Rivers and waterfalls running through the village!

Traditional Houses and shops.
And then it was time for dinner, but that is for Part 2!
———————–
Guest House Kazeyoubi

Izu Peninsula in Eastern Shizuoka Prefecture is the most famous and oldest hotsprings area in Japan. Start either from Atami or Mishima JR Shinkasen Stations and visit this great region by train, bus or car!
If you begin your journey from Atami, take the train to Ito City and change onto the local private line and get off at Izu Koogen Station. From there you can either walk (45 minutes) or take a taxi if you are in a hurry!
Guest House Kazeyoubi in fact is a private pension with real hotsprings private bath and open-air bath fed with water coming from the nearby Ooumuro Yama, a long-extinct volcano.

The Guest House is a bit out the ordinary as it is conceived and decorated as a Spanish House with Spanish food as its main course for dinner! Plenty to please and satisfy expats! The owner actually told us that foreigners are far from being the exception, but keep inmind that they offer Japanese cuisine options as you will see later!

As I said, the whole interior decoration has been conceived along Spanish lines!

But the Japanese bath on the balcony is definitely Japanese-style with real hotsprings water!
The rooms do have European-style shower, bathrooms, so no worries there, either!
There is also a “rotenburo”/open-air semi-public bath. As the guest house has only 6 rooms, you will always find some time during the day or night vacant all for yourself (ves)!

The dining room for dinner and breakfast has also been decorated in Spanish style. You can even eat on the verandah when the weather is good enough!
Dinners are served early from 18:00 but breakfasts start from 08:00 (nothing Spanish about that, LOL!)

Now, expats will happy to learn that meals are Gargantuan by Japanese standards! Above Amuse include Iberico Smoj\ked Ham!

Now if you want to drink wine (Spanish. There are all kinds of drinks available, though!), ask for “nomihoudai”/”drink as much as you want” system, it’s a bargain!

We had ordered the sashimi plate on the Internet as an optional dish to an already great meal!:
-From top clockwise (see above picture):
Aji no sashimi/Saurel Sashimi
Amaebi/Sweet Shrimps
Aji no tataki/Saurel cut in small pieces
Katsuo/Bonito with freshly grated ginger
Inada/Young Japanese amberjack (buri)
Maguro/Tuna
-Centre:
Ika somen/Cuttle-fish served in long thin strips
Notice all the shiso leaves! 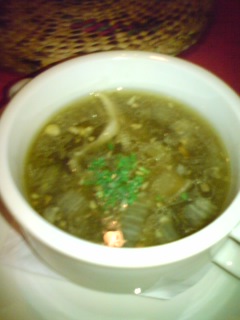 The fresh vegetable dip to help us wait for the next courses!

The Iberico Pork Steak for me, 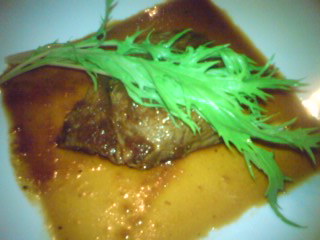 and a great Japanese Beef steak for the Missus!

Do not ask how we managed to finish the dessert (actually, I helped the Missus!)!

In fact eating dinner so early was a good idea, because

I had to help the Missus finish it!

Guest House Kazeyoobi, a place I would definitely recommend to anyone, especially considering the great smiling and attentive welcome!