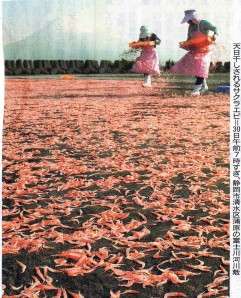 The drying season for Sakura Ebi/Cheery Shrimps exclusively caught in ShizuokaPrefecture has started.

Above picture was taken in Shizuoka City, Shimizu Ku, Kanbara along the Fujikawa River where the shrimps are laid to dry while the weather is warm and dry before being delivered all over Japan!

November 5th saw the first haul of Sakura ebi/Cherry blossom Shrimp of the Autumn being auctioned at Yui Harbour and Oikawa Fish Market.
12 tonnes were sold, that is about three times as much as last year.
Stocks have been plentiful thanks to very strict enforcement of catch limits self-imposed by the Sakura Ebi Fishermen Association, the first-ever such association in the whole of Japan to impose such voluntary limits of their catches!
Sakura Ebi are exclusively caught in the middle of Suruga Bay.
They are sucked into the boats directly from the nets, ensuring a later release of all unwanted catch live and unharmed into the sea.
Who said the Japanese were depopulating the sea? 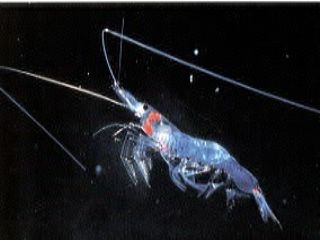 “Sakura Ebi” or Sakura shrimp is a vey small (maximum 5 cm) crustacean caught in the Suruga Bay of Shizuoka Prefecture. Most of ships are anchored in Yui City (will become part of Shizuka City soon) Harbour.

The shrimps are caught in special net baskets according to long traditions before they are put on the market immediately for auction.
Many fishermen open their own sushi restaurants, bars and often their catches of the night until early in the afternoon before taking a well-earned sleep.

For people who prefer them as sushi, the gunkan style is the most appreciated!
Most French and Italian Restaurants in Shizuoka City and around will serve them in quiches!

(pic taken at Togeppo Restaurant/Asty-Shizuoka City Station)
Another popular way to eat them is of course as a tempura called kaki-age, either with fresh sakura ebi in season or dried ones.
Fishermen use to dry their catch for sale and export until the government had the great idea to run an expressway just along the harbour!
The shrimps are now dried along nearby Fujikawa River, creating large quaint rose expanses in the most useen for locations!

Such a restaurant is Izutsuya, located along the main road called “Sakura Ebi Street” about 15 minutes away from the station on foot. It will also become a good opportunity to visit Yui which has quite a lot to offer, especially the the Hiroshige Ukiyoe Museum (which includes an interesting local products shop).

Itsuzuya offers all kinds of dishes and appetizers with sakura ebi.

As for people with hearty customers, choose one of the “set menus”. They are very good value, typically Japanese, and scrumptious!
Do make a point to try “Sakura Ebi Kaki Age” (picture above). It is a gastronomic experience!
As for sake lovers, do not worry! Itsuzuya serves a Shosetsu Brewery (Yui) nama honjozo in small 300ml bottles!