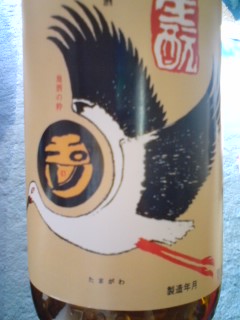 A lot has been written and will be written both here in Japan and abroad on Phillip Harper as he has, with the likes of John Gauntner, Timothy Sullivan and Melinda Joe, established himself as one of the references proving once for all that Japanese sake has at last expanded beyond the confines of this island for the good of all.
It is only a question of time when sake breweries will become a part of life like wine and beer abroad as demonstrated by the five existing branches of large Japanese breweries in the United States employing a full American staff and Moto I, the entirely owned and run American Sake Brewery. 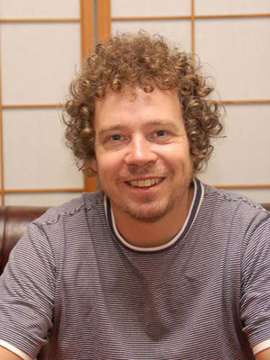 What makes the difference is that Phillip has gone as far as becoming the only foreign sake “toji”/master brewer in a Japanese brewery, namely Ki no Shita Brewery in Kyoto Prefecture!
An Oxford graduate hailing from Cornwall, it took him 18 years of sheer courage and guts to break into the closely guarded world of Japanese sake to gain recognition and earn his master brewer status in 2001.
The media (including The Los Angeles Times) finally take good note of his achievements when he was formally asked by Owner Yoshito Kinoshita to become his new Master Brewer (incidentally Phillip had already held that position in Osaka for two years).

I have always been intrigued by this fellow sake-loving foreigner, and when Melinda Joe and Etsuko Nakamura started sending me some of his bottles, I decided it was grand time that I atoned for my ignorance and tasted his sake which has won so many fans in Japan and abroad!

Before I continue with this first of three (and hopefully more) bottles tasting report, I would like to point out that some will not agree with my heavily Shizuoka sake influenced palate and my “wine” tasting methods (just can’t get rid of my Burgundian origin!). I will just invite them to drink, taste and compare notes!

Overall: A sake devised for food, especially heavy food.
Strong, almost aggressive sake with an uncompromising character.
Turns more complex with the second glass. Elusive at times, but always with a fruity note so remiscent of Musk Melon.
For strong sake officionados!

Like all the kimoto and yamahai sakes we do here, this was made without the use of anything but water, rice and koji. We do not
add cultured yeast or anything else to the mash. It is pre-Meiji brewing, and the kimoto under question is precisely the kind of sake that we read about in Meiji Period texts – SMV well into double figures on the plus side, junmai of course, acidity well over two, and comfortably at modern levels of alcohol.

The rice for the kimoto you tasted is organic Gohyakumangoku grown 15 miles away near the haunt of the Oriental White Stork/コウノトリ (as depicted on the label). The methods are different from standard organic rice farming, as the prime intention is to provide a habitat for these
amazing birds. As you can see from the red sticker, some of the
price goes towards a support organization. This project is all about the
birds, so it would be great if you could give them a plug. FYI, the original artwork is by Sakane Katsuke, an eminent artist who happens to be the boss’s brother-in-law and is also the creator of our excellent Tamagawa logo. 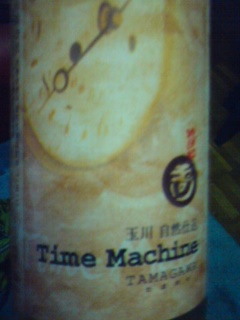 This the second of the three bottles I received from his fans in Tokyo. That particular one was sent to me by Etsuko Nakamura.

Overall: I’ve been accused of not beingvery lyrical in my comments, whatever my feelings towards a wine or sake in spite of my great love for them. I suppose I’m too old to change! LOL
I waited until the very last glass (note, galss, not cup!) before writing my impressions.
Frankly speaking, an unknowledgeable person could be easily fooled into believing into thinking he is drinking wine! What with the bottle shape, the colour of the sake and the quaint label!
Liquorish, but not tart or overwhelming, I slowly savoured it like Sauternes or sweet white Port.
With plenty of translated explanations, it should hit the palate of some vaunted “tasters” anywhere in the world!

“We also do a barking mad sake called Time Machine that is made in the style of the Edo Period. Etsuko took a shine to it last year. We pressed this year’sTime Machine last week: specs are

SMV -70, Acidity 3.4, Amino acids 7.3, Alcohol 16.6.”
(Specs seem to vary with what is written on the labels)
Phillip later commented:
“The discrepancy in the data is because you drank last year’s
(slightly diluted) version: I gave the specs for this year’s
genshu – which, for your information, is already more deeply
coloured than the bottle you drank, only a week after pressing.”
——————————— 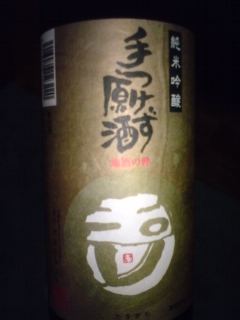 This the third of the three bottles I received from his fans in Tokyo. That particular one was sent to me by Melinda Joe.

Overall: Elegant and easy to drink in spite of high alcohol contents.
For once, similar to Shizuoka-brewed sake.
Combines fruitiness and dryness into a remarkably palatable (eminently drinkable) creation!