The Ancient Site of A Samurai House (Nomura Family) 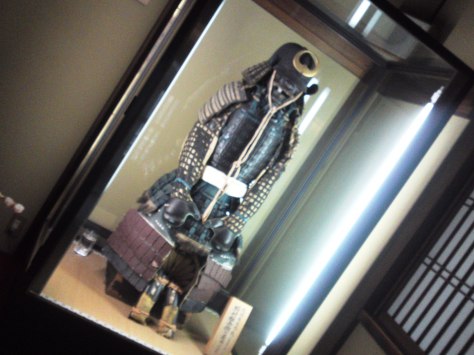 On the third day of our stay in Kanazawa City we decided to have a small tour of Naga District, which is famous for its ancient houses and architecture!

These walls actually are featured on every guidebook!
The walls are protected with fresh straw against the snow which will fall soon!

It gives a great insight of the city rich quarters in feudal times with the moats and stone abutments!

Some of the properties are enormous by Japanese standards!

The entrance of “The Ancient Site of A Samurai House (Nomura Family)”/official English name!

The first thing you notice is the large kura/warehouse, a prerequisite in a rich samurai house!

the actual entrance to the residence!

Japanese and English pamphlets are available, and although the translation is amateurish, the explanations are sufficient:

These are the ruins, or more aptly said the remains of a samurai house formerly owned by the Nomura Family.
Lord mMeda Toshiie took over the Kanazawa Castle in 1583, and ensured a long and prosperous reign of the Kaga clan which spanned over three centuries thanks to his followers producing 5 million bushels (one million koku) annual rice yield.
At that time , one of his high-ranked followers, Nomura Denbei Nobusada, was granted by Lord Toshiie a fief of one thousand koku which was furthermore promoted to twelve hundred koku.
His descendants also served as senor retainers, each given a 1,000 tsubo (3,305square meter) estate.
The old family estate was retained until the 12th generation by the time of the Meiji Restoration.

Past the the portal and into the real entrance.

However, because of the break-up of the feudal system. many samurai houses were destroyed, some changed into vegetable gardens or others sold out.
Only parts of old gates and walls around these ancient houses are left as they were.
The Nomura Family did not escape the same fate.
The last piece of property was bought in the early Showa period by a local industrialist, Kubo Hikobei, who lived in Hashidate Village in southern Ishikawa Prefecture and traded with people in Hokkaido.
Kubo Hikobei moved the drawing room, part of a beautifully constructed old house from Daishoji town near his native village inside the House.
Today visitors can understand the prosperity of the industrialist in olden times through the gorgeous architecture and at the same time imagine the way of life of ancestors of the city when discovering the beautiful garden attached to the formal samurai house.

in March 2009 the Michelin Green Guide Japon awarded a 2-star ranking to the garden and in 2003 the American Journal of Japanese gGrdening ranked the Nomuara House garden as the 3rd best in Japan!

past the entrance you will discover a genuine samurai full armor in the lobby!

The skirt and greaves (hip, thigh and leg armor)!

The Nomura Family mon/crest was a fan!

The living room with the tokonma/alcove!

There is a whole room designed as a museum!

You have free access to the garden (although you are not allowed to walk inside!)! 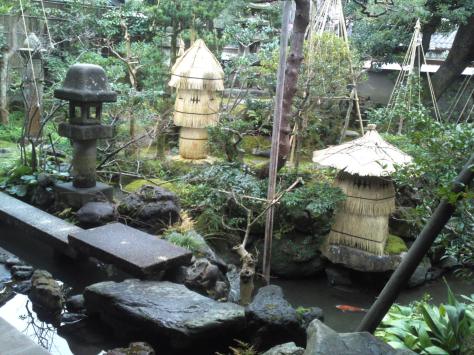 For a fuller view! 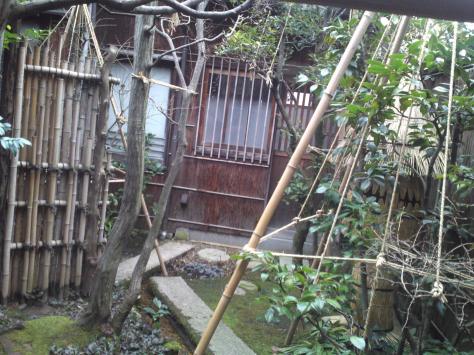 Another corner of the garden!

You can climb an ancient stone stair leading to the upstairs tea room!

The tea room is really tiny!

And the entrance is very low!

One can catch an overview of the graren through a wide bay window! 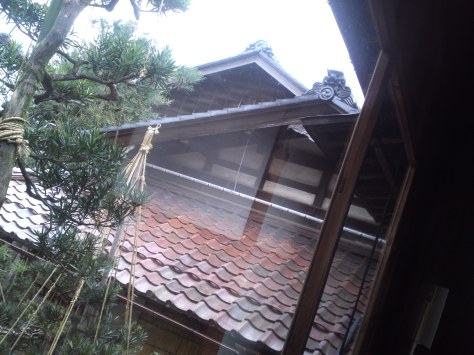 Great details of the roofs!

The last view before departing….

A SOCIETY FOR THE PRESERVATION OF NOMURA FAMILY
(one of the Ruins of Samurai House)
Above is the”official” naming!

After having taken you through Nishi/West Chaya Street let’s have a look together at Higashi/East Tea Houses Street! 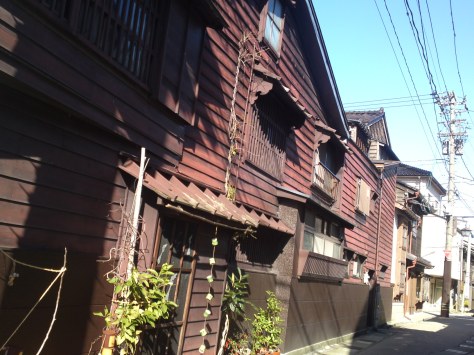 the dun color is so warm and attractive!

These houses are made of wood and are comparativelu light, but they can resist rain, snow and what else! 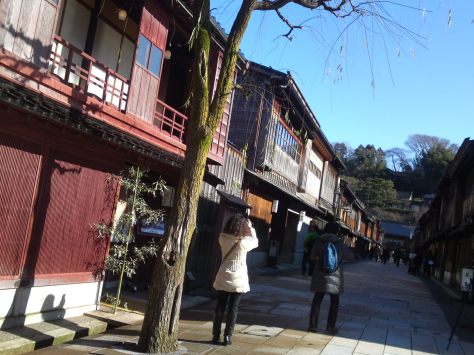 A paradise for photographers!
Actually we had to fend off the local TV channel crews! 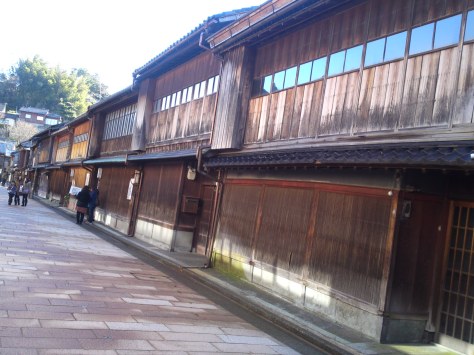 Like in Nishi Chaya Street these tea Houses are typical for their second floor windows!

In summer they can be opened to allow the tea ladies and passers-by to directly communicate!

One can endlessly play with the natural lighting!

On the first floor is a famous sweet bean shop!

Shall we go to this Japanese restaurant to close the visit!

Next time I will take you to the ancient house of a Samurai!
———————————–
Old Houses in Nishi Chaya Street and Vicinity in Kanazawa City! 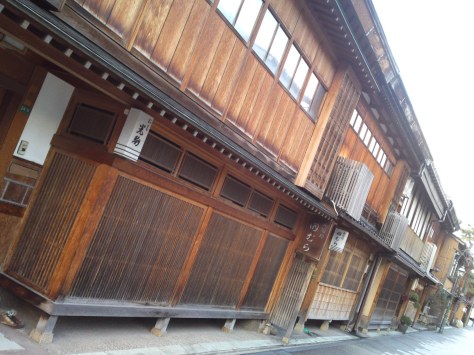 There are two streets and their vicinity that you must absolutely in Kanazawa City: Nisahi Chya/Wets Tea Houses Street and Higashi Chaya/East Tea Houses Street!
Today let me take you around Nishi Chaya Street.
Next time you visit Kanazawa City, I’m sure you will find thousands of spots to photograph! 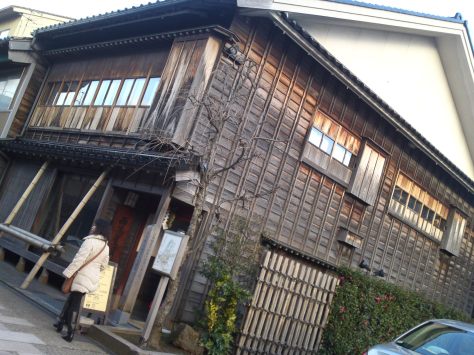 All these tea houses, dating back hundred of years, are recognizable to their peculiar window rows on the second floor which allow tea ladies and customers to see each other!

This ancient building is actually the seat of the Tea Houses Association and is still actively used by tea ladies for practicing dancing and playing diverse instruments!

This grand house has been completely renovated by the owners of the sweet beans shop on the ground floor!

A Tea House of a different style. Expensive!

This house is owned by the famous beef store called Tengu!

tengu is a kind of deity in Japan.
Can you spot its red mask?

Its mask always bear a long nose!
Now. this nose is an inspiration for a variety of symbols! LOL

An ancient house probably used as a warehouse.
Note the mon/crests on the roof!

The back entrance to Nishi Chaya Street with many shops! 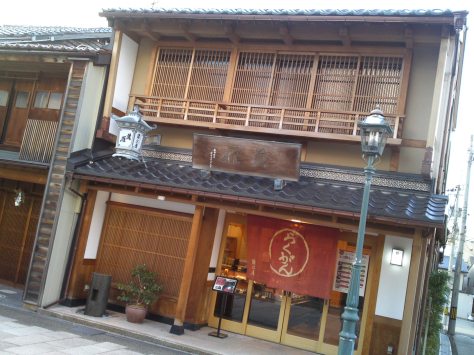 Some shops like Rakugan are famous all over Japan!

In the vicinity some old houses are still restored in between modern buildings!

An old and small temple and and house from across a bridge!

“Kura” (in japanese 蔵 or 倉) means “warehouse” or “Storehouse”.
In traditional Japan, especially during the Edo Era, as most of buildings and urba/village structures were made of wood, fires were the bane of society by and large.
However well-protected a fire would consume a house or buildings and all its properties within minutes.
Hence a special building or warehouse was needed to protect goods and properties against such a catastrophe.
But erecting a storehouse solely made of concrete, stones and some metal cost a vast amount of silver and gold and only rich merchants and nobility could afford them. Even castles could not be built entirely of stone then.

Kanazawa, a City replete with history and things of the past offered me quite sights when I stayed there beginning of this week!

This old kura whose wall are entirely gilded with real gold leaves could be seen only from the inside garden of a famous shop specializing in gold leaf accessories! 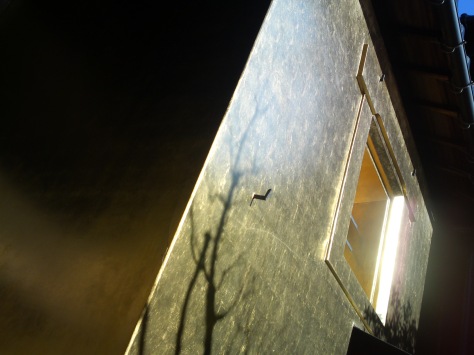 Not an easy picture to take at any time of the day or night!

The walls inside were also completely gilded in pure gold!
Of visitors are expressly requested not to touch the walls!

I couldn’t guess at first the purpose of this splendid kura restored to its full splendor!

Such a widow awning made of fired tiles is rarely seen!

From the opposite side.
Notice the “namako” pattern on the lower part of the wall!

The roof peak decoration gave me an inkling of what its real use was!

Looking at the side entrance I hadn’t noticed because of the fence wall I discovered its religious vocation!

A beautiful “mon” in the middle of another extravagant fired tile awning!

It was sheltering a praying wheel! 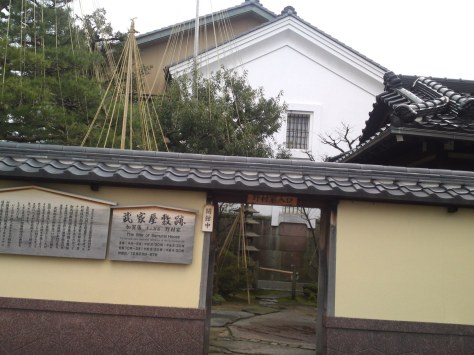 I belatedly discovered this kura inside “The Site of Samurai House” (aricle coming soon!)!

Beautifully restored, which was normal as it is part of a whole museum complex! 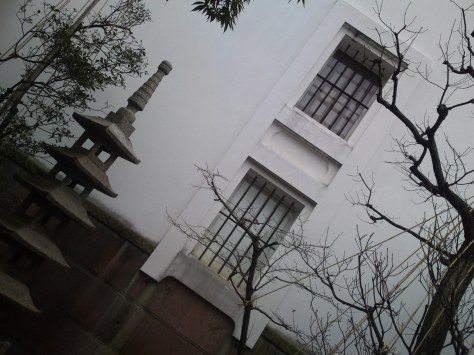 Th windows have actually been boarded up from the inside!

No, this is not a ghost light, but the reflection of lantern!

The reflection from another angle!

I suspect this kura has been turned into a direct access annex of the neighboring ancient house!

A sneak view of the side wall!

The door has been replaced with the wall but it was apparently boarded up from the inside!

But the lower wall base gives a clear indication its true origin!
——————————-
The Shovels are for he Snow in Kanazawa City!

I found these snow shovels at the bus stop near Kenroku Park in Kanazawa City!
Now, you understand that living in the snow country requires some volunteer work! 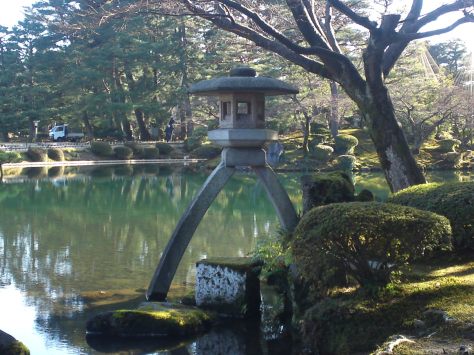 This stone lantern in Kenroku Park is the symbol of that City!
You will see on every tourism pamphlet.
I know that some buffs take picture of that single art piece every season in every weather!

The city is very proud of it and does hesitate to show it at your feet!
———————-
Giant Pot in Kanazawa City!

Right from the exit of the Kanazawa JR Station you have to keep your eyes wide open for many interesting photography opportunities!

As this is a very cold part of Japan in winter the hot water pot is always on the fire!
Mind you would need a lot of water and fuel for this one! LOL
——————————–
Running Amok in Kanazawa City!

I was walking around the hotel on the last evening spent in Kanazawa City while the Dragon was going through her girlie shopping when I noticed those legs running on grassy slope!

I certainly felt a lot humor and artistry in this artistic creation!
I wnodered if the artist meant speed, escape or plain human running!

Looking at it at the back you can ascertain it is made of a single “loop”!
Very clever!
It must be an inspiration to the local kids!
Who said the Japanese didn’t have a sense of humor?
—————————
Have already eaten it ? or, Have you already been eaten?

Found this in the famous Oumichiou Market in central Kanazawa City!

I must say to the benefit of Kanazawa City that a lot of information is also available in good English!

A splendid fire hydrant manhole cover with the symbol of Kanazawa City, the stone lantern in Kanazawa castle park!

I’ve just come back for a 2-night, 3-day trip to Kanazawa City in Ishikawa Prefecture, so you can expect quite a few reports in the days to come!
I start with what I could see ta my feet, namely manhole covers!

A large, probably private manhole cover although there were quite a few around! 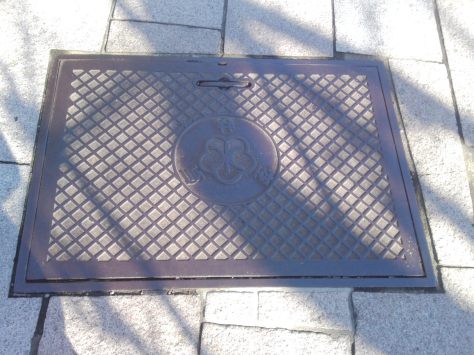 A large rectangular manhole cover seen here and there.

The same as the brand new above but obviously a lot older and used above a fire hydrant! 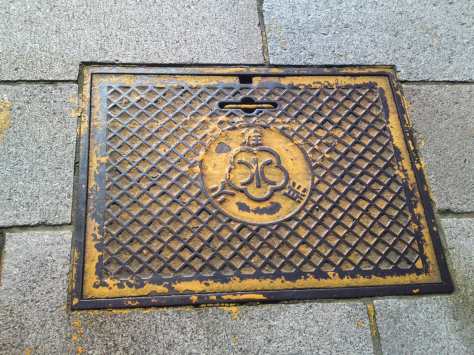 A beautiful double manhole cover in the middle of the street! 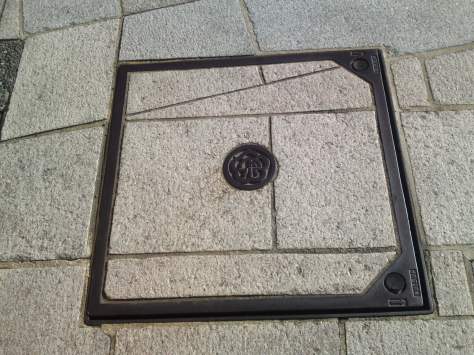 A manhole cover with the city emblem motif blending into its pavement environment!

An old type of manhole cover over access to electricity machinery produced by Ohtake Foundry! 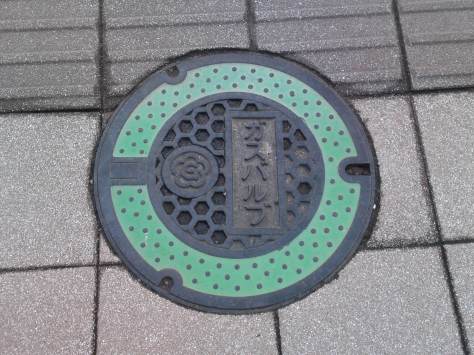 A newly made intricate manhole cover!

Another round manhole cover with a different central indication! 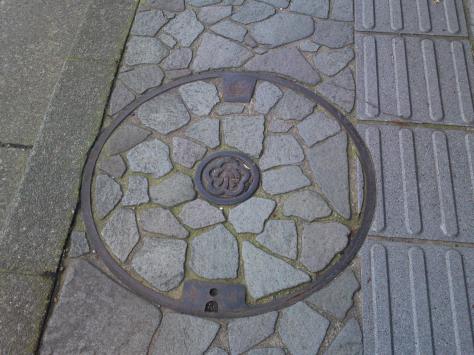 Another manhole cover blending into is surrounding pavement along the street to the Ishikawa Prefecture Museum!

This type of fire hydrant manhole cover is found all over the country but each city, as shown here again, has a distinctive symbol!