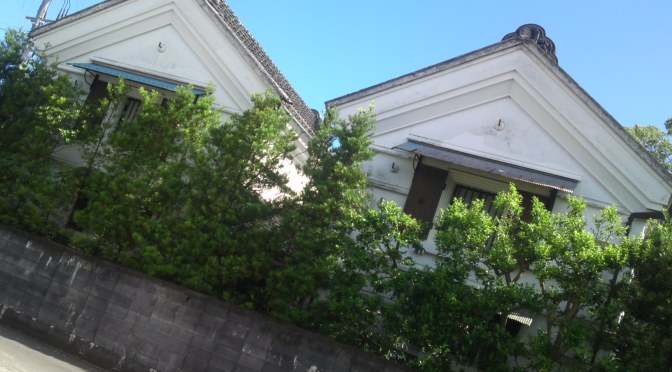 the other day I noticed a kura hidden inside a big property and s\decided to investigate!
The whole property was locked up and unfortunately access and views were very limited in spite of its splendid state!

I decided to find the entrance of the property where I found this commemorative pillar erected beside the entrance gate!
It stated that this home erected during the Meiji Era was owned by the Akino Family and had been designated as a national Cultural Asset in 1935!

Beside the very door hung this name plate with name of Akino Family and a rare kind of Arms representing agricultural tools! The Arms were evidently inspired by those of noble families in Europe!
I found out later that the Akin Family was probably the richest and the most powerful family in Edo Period and beyond in Shimada City which was then one of the richest cities in the Prefecture!
Unfortunately in spite of its status as a Cultural Asset it is uninhabited and closed to the public although local politicians are fighting to have it open as a local Museum!

What I found hidden behind all manners of vegetation was not one but a double imposing kura!
I was told there was even a third one hidden by trees inside the promises!
The family must have been enormously rich!

Unusually tall walls with their alignment hooks still unmoved or unbent!
I was told the kura contained an incredible wealth of documents and what else!

A shame we can see only a glimpse of it all!

The double kura from the back!

It is good-by for the moment but I sincerely hope that one day I will be allowed to discover all that is hidden behind these trees!