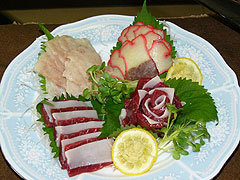 Following some insistent queries, I felt it was about time to publish my thoughts again about whalemeat!

One can easily eat whale meat at Sushi Restaurants In Shizuoka Prefecture or even buy it directly at supermarkets.

Most of it comes from Mink and Sperm Whales/Mako Kujira.
Whale meat should not be confused with Iruka/Dolphins whose meat has appeared on Japanese tables since times immemorial. It concerns an entirely different taste and cooking.

Whale meat can be appreciated in various forms:

“Kujira Tataki”, that is whale meat cooked in small cuts ready for sashimi.

“Kuijra Seikyoyaki”, a Japanese way of cooking and serving cut to be eaten with hot rice, or even instead of a beef steak.

As Sushi, it does come in many guises to accomodate various parts.
Each region has its own traditional ways and presentations.
Incidentally, whale meat is safer than any meat from land animal, as it is purely biological!

I fully understand this article will not be appreciated by some people, but do not expect me to apologize for whatever reasons!
I would like to to remind short memories that whales were practically decimated from (under) the surface of this world in the 19th Century by US and European whalers (including French Basques as I had to remind my own brother!) for their oil used in lamps. Once the fat was collected the remains were dumped back into the sea.

When the US in particular realised that they were quickly running out, they pushed for mineral oil exploitation with the economical and political consequences we are still suffering from. In short the overkilling of whales is the direct cause and link to wars in the Middle East.

Last but not least, who and what was Commodore Perry after all?
A whaler! The US had had promoted a common whaler captain to the grand rank of Commodore for the political and diplomatic needs of the time as he happened to ply his trade in nearby seas (I mean in the vicinity of Japan)!

I mentioned that whale meat is safer than beef. Incidentally, who practically exterminated bisons as a policy for driving Indians (Amerindians) out of the way and now makes a big deal of protecting them? 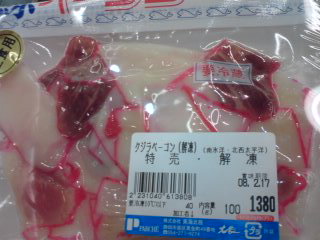 I once was accused of trying to get attention, being told in the process that whalemeat was not sold in my Prefecture.
Here is what is on sale at Parche, the largest Supermarket in Shizuoka City.

Whale bacon is available all year.
Reading the label, it said the whales wre caught in Northwestern Pacific. Bacon is very popular here and can be eaten at izakaya.

Plenty of dolphin meat is avalaible. This particularly came from Gunma Prefecture.
Dolphin meat is regularly served at Primary School lunches in Shizuoka Prefecture. The meat comes from dolphins who were accidentally caught in nets, or culled because of growing numbers (like hunters do with deer in the US)

Last question: What do the Inuit think of the US and Canada limiting or depriving them of their livelihood?