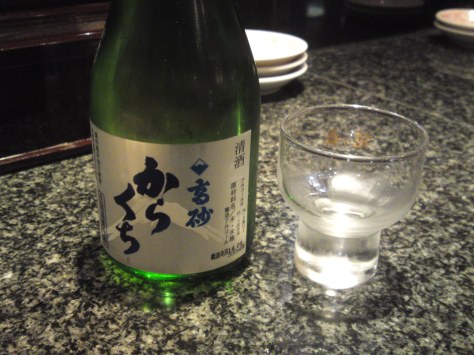 As a general rule I always take notes when drinking sake in a Restaurant or bar in Shizuoka Prefecture (and very often elsewhere!) as some of the same sake are impossible to find elsewhere because they are brewed on order.
I found this particular one at Uogashi Sushi restaurant inside the ASTY Mall in Shizuoka City JR Station!

It is a sake just called “Karakuchi/Dry” by Fuji-Takasago in Fujinomiya City/
There are no indications as toward its status although I suspect it is a honjozo.
It certainly tasted better than expected proving once again the high quality of Shizuoka sake in general!

Clarity: very clear
Color: almost transparent
Aroma: assertive. Dry and fruity. Pears.
Body: fluid
Taste: Dry and fruity attack.
More complex than expected. Pears, almonds, apricots, coffee beans.
Lingers on for a little while before departing on s drier note.
varies little with food but for a sweeter turn although it will quickly reassess itself to an even drier note.