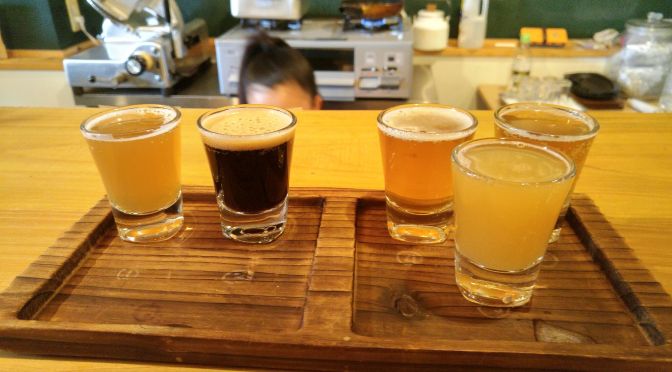 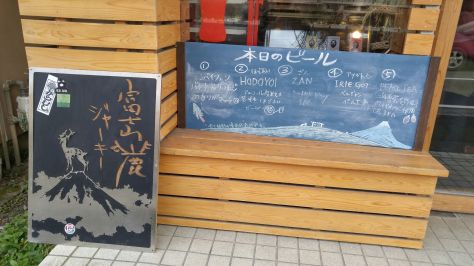 Fujinomiya City is already famed all over Japan for its four sake breweries and now it counts not but two craft beer breweries located on both side of Sengen Shrine! As for Fujiyama Hunter’s Beer Tap Room located behind Sengen Shrine it is the official tap room of Farment Co. Ltd as the brewery and tap room are separate!

All COD/Cash on Delivery system! 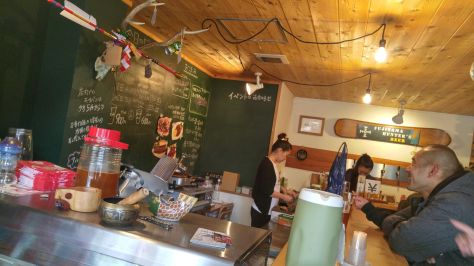 As for the clientele of this particular tap room it is more local than others, probably due to its almost hidden away location, but very authentic in atmosphere. Interestingly enough it seems to be very popular with local ladies (of all ages! lol)!

Very proud of their craft beers! (I will come to that later!) 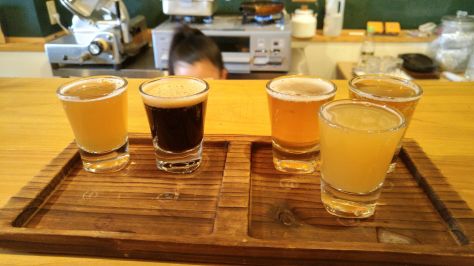 As it was my first visit I naturally ordered the reasonably price tasting set! 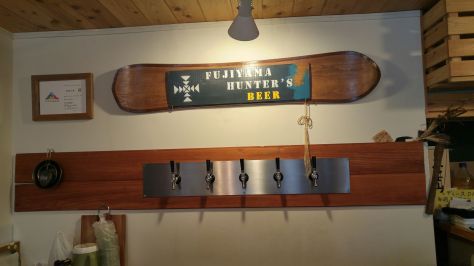 Their pride and joy! Local game/venison and wild boar cuisine! Unfortunately I came pretty late on Sunday afternoon and everything had already been eaten! 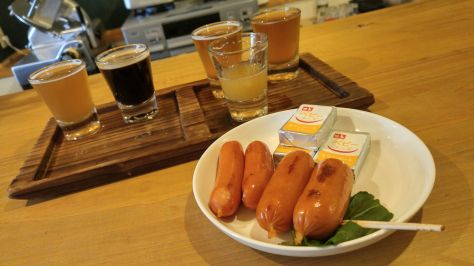 I had to settle for simpler fare!

The rest of the menu!I noticed, because maybe it was Sunday, that everyone asked for something to eat! 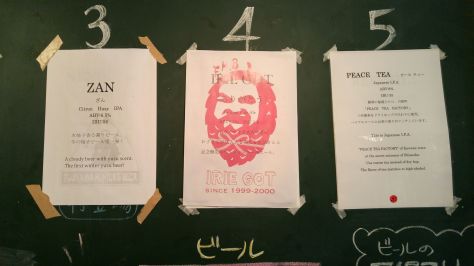 The regular craft beers are available in bottles under the names of Oppa, Yunomura and Morinotane.
As for other regular and limited crafts beers, they are 8fr the moment!) Peace Tea, Iri Got, Zan, …

Meaning I will have to go there again soon! 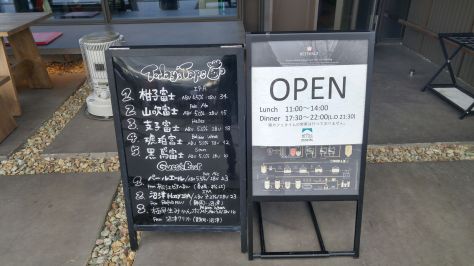 Fujinomiya City benefiting from untold amounts of best natural water thanks to the proximity to Mount Fuji, it was only a question of time for new beer breweries sprouting here and there!
I visited one of them recently, namely Mount Fuji Brewing! An easy name to remember, isn’t it?

The brewery including a vast restaurant is conveniently located near the entrance of Sengen Shrine, arguably the most important one in the Prefecture, meaning there crowds of thirsty visitors to satisfy! The beer is brewed inside the very precincts for all to see!

It also includes a vast restaurant patronized by beer lovers and families alike. Note the restaurant hours.
The food is definitely of a higher standard for the simple reason that Fujinomiya City is one of the most noted agricultural areas in the Prefecture, be it vegetables, meat or even fish (it is famous for its many kinds of trouts!)! 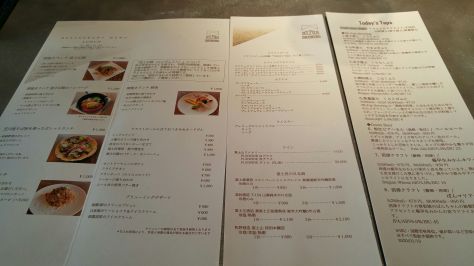 Take a good look at the beautiful menu, be it for drinks, food, or both!

If it is your first visit, I would definitely recommend a tasting set of at least three craft beers brewed on site!
They do also serve beers from other breweries on a collaboration basis!
Above is the set I chose! 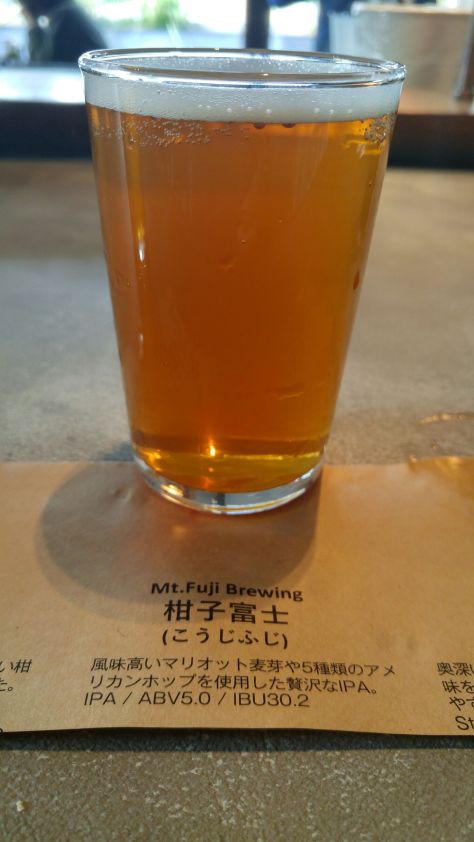 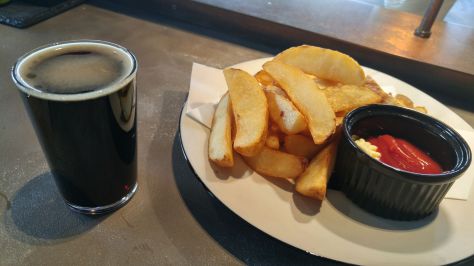 And don’t forget the food! Plenty of surprises in wait for you!
But that is for the next report! LOL 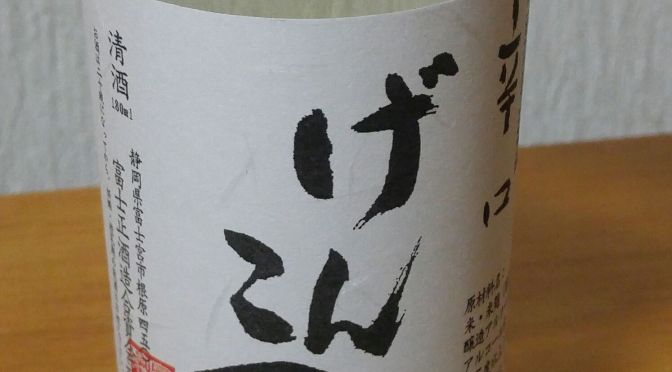 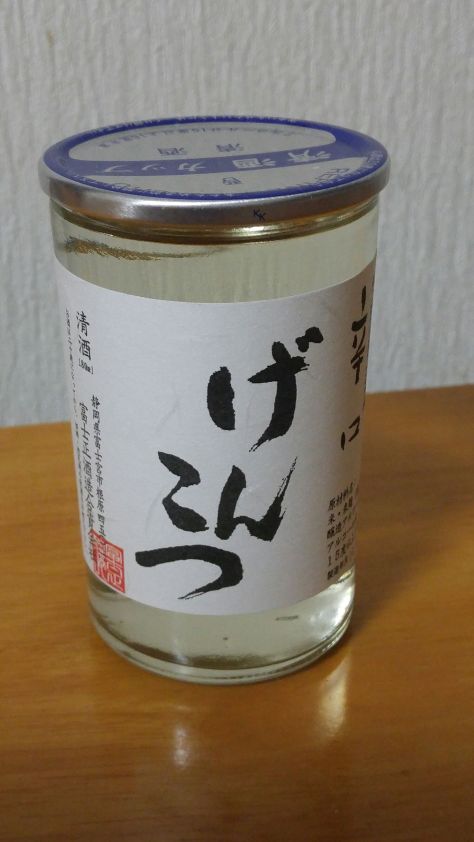 The other day I had the surprise to discover a One Cup sake by Fujimasa Brewery which is located in Fujinomiya City, a long way from Shizuoka City! 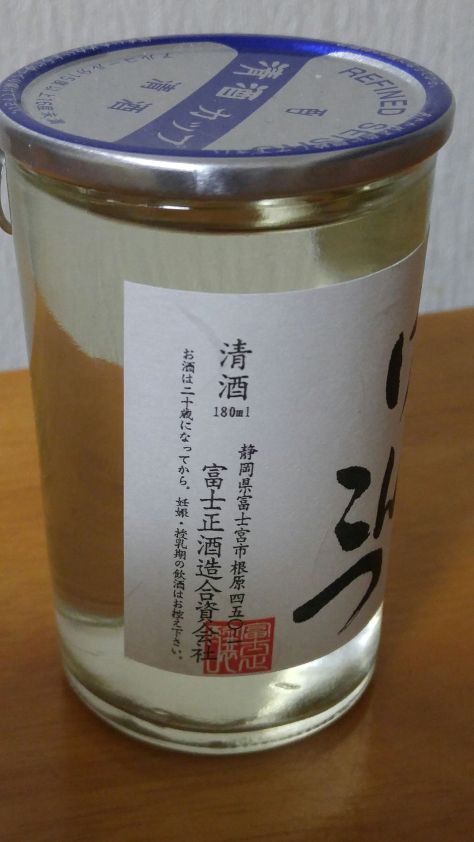 Interesting and very macho name: Genkotsu, that is “The Fist”!

Old-fashioned cap!
Incidentally this is a honjozo!

Clarity: very clear
Color: light golden hue
Aroma: dry, smoky, oak, plums
Body: fluid
Taste: very dry and smoky attack.
Dry plums.
Pleasantly warms back of the palate.
Lingers for a while before departing on a softer note of dry oranges and more plums.
Tends to turn even drier and smokier with food.
Late appearance of chestnuts and bitter chocolate.

Overall: as expected a sake fit for men’s taste although I don’t doubt many members of the so-called weak gender will appreciate its uncompromising dryness and smoky oaken notes!
Great with a hot meal!
Suggested pairings: yakitori, oden, stews, cheese.

This time I tasted another brew by Fujinishiki Brewery in Fujinomiya City!
It is a Junmai Genshu Nama called “Juku/塾/Matured”!

Clarity: very clear
Color: golden hue, very similar to a white wine
Aroma: assertive, dry and fruity.
Muscat, raisins, custard, musk melon, hints of peach, ripe figs and chestnuts
Body: slightly sirupy
Taste: dry and mellow attack at first backed only with a little junmai petillant with some welcome acidity.
Complex: custard, peach, figs, chestnuts.
Lingers for while warming up the back of the palate before departing on a strong dark chocolate appearance.
Very easy to drink in spite of its high alcohol contents.

Overall: a very intriguing sake you can enjoy as a high class mellow white wine!
Will splendidly marry with practically any food.
Stays complex all the way through and showing ever-changing facets probably due to the unusual rice and the high alcohol contents.
Very unusual for a Shizuoka Prefecture sake.
A must-try not only as a sake but as a high class beverage for a whole meal.
You will overwhelm your guests!

This time I tasted a brew by Fujinishiki Brewery in Fujinomiya City!

This is a Hiyaoroshi, that is a sake pasteurized only once before bottling only.
It is not only a junmai but also a genshu, that is no pure water was added!

Clarity: very clear
Color: white wine-like golden hue
Aroma: dry and very fruity
Complex: pineapple, banana, apples, mango, apricot
Body: fluid
Taste: softer than expected dry and fruity attack back up by puissant junmai petillant
Complex: almonds, biscuits, custard
Easy to drink in spite of its high alcohol content thanks to the Shizuoka yeast.
Lingers on for a while warming up the back of the palate.
Varies little with food but for a drier finish.
Insistently asks for the next sip and cup, a true sign pf a good sake.

Overall: Intriguing, complex and very pleasant sake!
The type of sake you can enjoy during a whole meal from starters to desserts as an almighty white wine!
Suggested pairings, especially when slightly chilled: soft-style creamy cheese and nuts, cashew nuts, Japanese pickles.

Now, this is the fourth tasting of the second batch of Shizuoka Prefecture One Cup Sake I obtained at Matsuzakaya Department Store in Shizuoka City!

A one cup sake by Makino Brewery in Fujinomiya City!

Shimizu Minato Jirocyo!
That is, Shimizu ( a city of its own before it was merged into Shizuoka City) Minato (harbor) Jirocyo (pronouce “Jirochoo”, the name of the local hero!)!

Although Makino Brewery is located at the foot of Mount Fuji in Fujinomiya City, it has produced this special brew for quite some time.
Actually it is the only brewery in Shizuoka Prefecture allowed to call one of its brands, “Fujisan/Mount Fuji”!

Clarity: very clear
Color: faint golden hue
Aroma: assertive. Very dry and fruity. Almonds, roasted nuts
Body: fluid
Taste: very dry and fruity attack
Dry banana, acid custard, dry oranges, roasted nuts, biscuits.
lingers for a short while warming up the back of the palate before departing with notes of oranges.
Varies little with food but for an even drier finish.
Late but strong appearance of coffee beans and then dark chocolate.

Overall: a solid and uncomplicated sake fit for an izakaya!
The dry sake lovers will appreciate it!
Bring it to a BBQ!
Suggested pairings: yakitori, curry dishes, pork and sausages.

Now, this is the third tasting of the second batch of Shizuoka Prefecture One Cup Sake I obtained at Matsuzakaya Department Store in Shizuoka City!

Overall: Straightforward, uncomplicated but very enjoyable sake.
Tends to show more complexity with time and rise in temperature.
Marries beautifully with food although eminently enjoyable on its own.
A sure value.
Suggested pairings: cheese, nuts, Japanese pickles, ham.