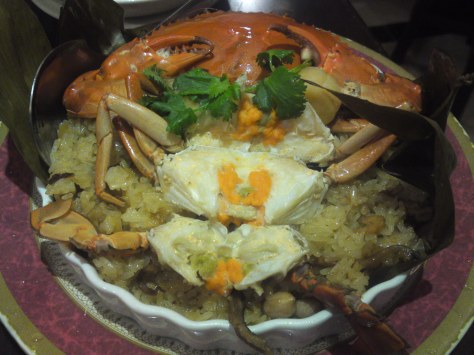 just came back from a very short stay in Taiwan!
Although my sojourn lasted only two nights, one day and a few hours, I still had time to form a first idea of the country, its people and food!

Until my next trip I can already affirm that:
-The general welcome felt better than I had expected. Warm people, comparatively soft-spoken and very helpful in spite of the language barriers.
-A lot lot lot cleaner than I had expected. No smoking in any buildings. No spitting. Old, sometimes very old buildings, but always clean inside. Old facilities, but clean. Station scrubbed to perfection.
-Great safety, Well I don’t know the seedier side (there is one even in every big city, even Tokyo!), but i flet safe walking in back streets at night.
-Last but not least great food, although nots as spicy as expected.
In a single sentence, i had to forget my expectations and learned a delightful lesson!

having really little time and a dragon to deal with all the time, I took whatever pictures I could. I hope they will give you a little idea of what to expect!

Taipei Railway was spotless clean and the many shops reminded very much of Japan. 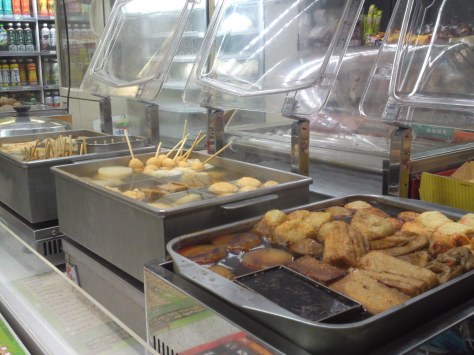 They even served Taiwan-style oden! 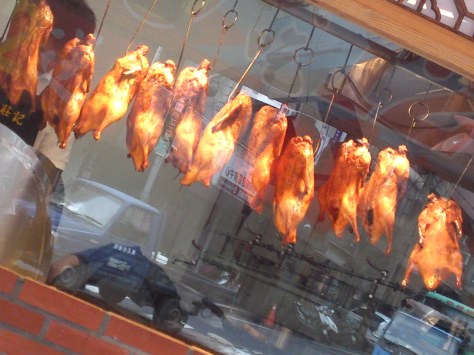 Peking Ducks in a small shop in Yingge!

As trains and taxis are really cheap ( a thiid of Japan!) we traveled to Yingge/鷲歌/Eagle song, a city famous all over Taiwan for its ceramics. Check Yingge Ceramics Museum!

Yingge is a small city full of sights worthy of a longer visit!
Like every city Yingge is full of small bikes and one has to be careful before crossing a street, the only drawback I found in this lovely country!
I took the picture a bove as I was waiting for the green light! 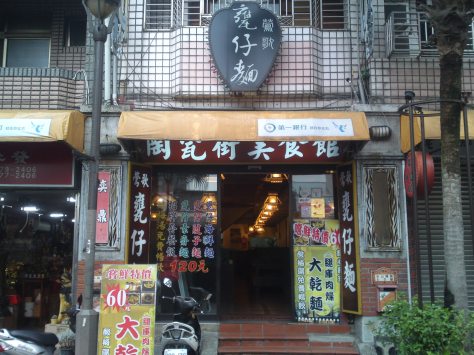 We found this small noodle restaurant in the Ceramic Street, a site you must absolutely visit, but I don’t know how to pronounce its name.

The small two characters at the top mean “Yingge”. And the last means “noodles”, but I don’t know how to pronounce the first two characters.
Maybe Tina can help me?

The menu written in three languages was very useful!
You mark the orders on a special leaflet, you pay beforehand 8cheap!) and wait for the food!

Look at both sides of the menu! 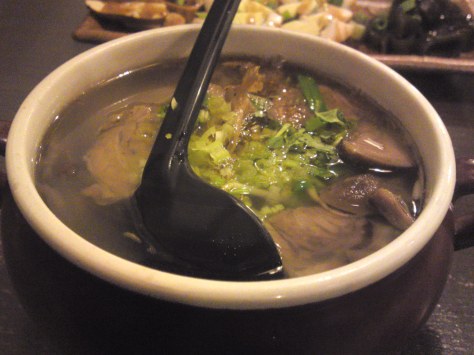 It was then back in Taipei in the rain and the dark looking for a restaurant called 杭州 小龍湯包 famous for its steamed 小龍湯包/Xiaolongbao located near the Chiang Kai Shek Memorial.

As usual we last our way but finally found it by sheer luck after interminable arguments!

A very popular place with the locals! 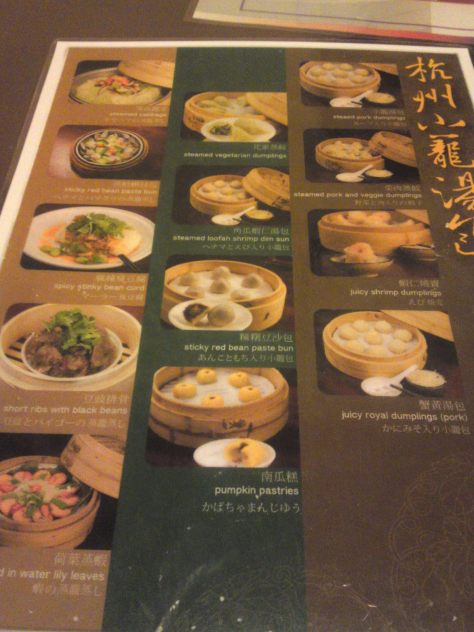 As in Yingge, same system with a menu to choose from and a leaflet on which to write your orders. This time you pay after the meal at the entrance. 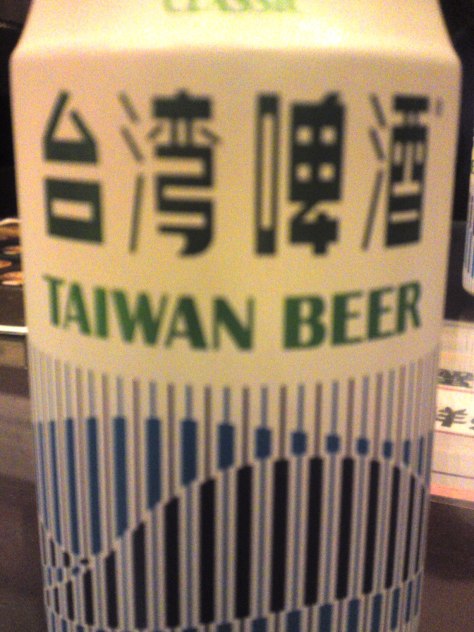 Our first taste of Taiwan beer! 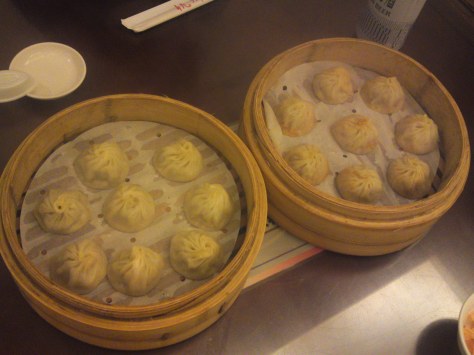 We had come for the sole purpose of sampling those 小龍湯包/Xiaolongbao!

And then it was back in the rain, loosing our way again and finding our destination by sheer luck again after many arguments again! the restaurant was supposed to be only 5 minutes from Taipei Central Railway Station….!
The dragon wouldn’t give me the time to take a picture of the restaurant sign board….
It is very famous (with quite a few Japanese businessmen among the guests), and the old lady taking the orders could speak English and Japanese!
But I somehow found the name as HAW JI or Haoji Dan Zai Noodles/好記担仔麺! Address in Taipei: Address: Qi Lin Lu 79, five minutes from Railway Station. 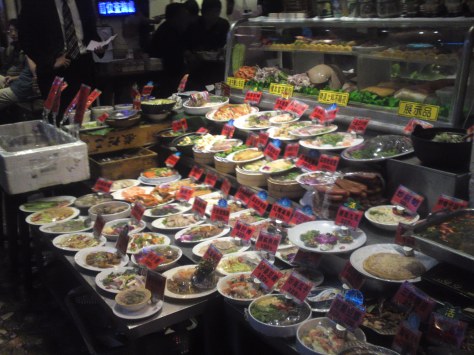 A very interesting concept:
First you choose your orders pointing at the ingredients exhibited outside the first small eating room. 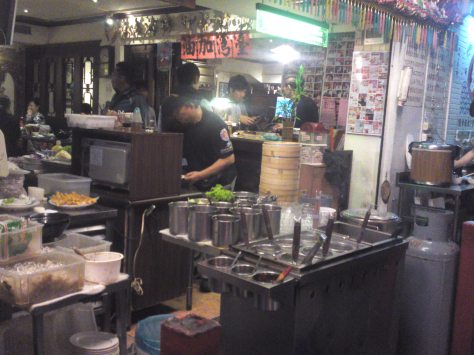 one of the three kitchens!

And then you move to the larger restaurant at the street corner where you are given a table and served!
You pay on your way out. 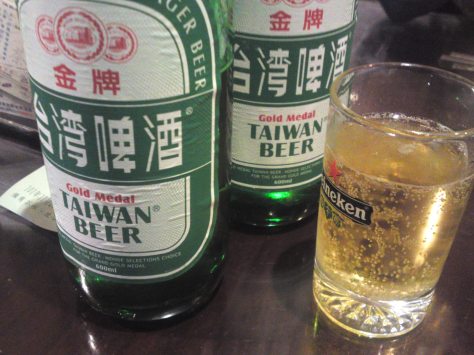 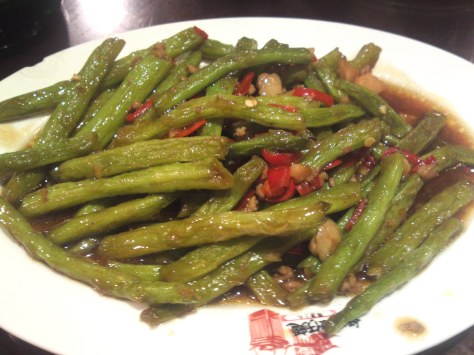 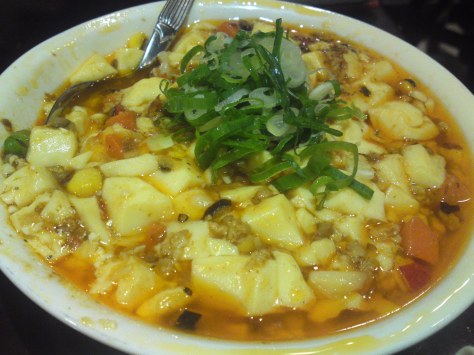 Mapo doufu/麻婆豆腐/”Pockmarked-Face Lady’s Tofu”!
Not as hot as expected by the Dragon, but I personally loved it! 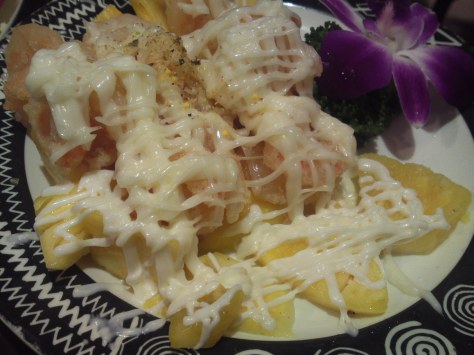 We were absolutely full and satisfied after these two dinners!

This time we came to the hotel by taxi!

Looking forward to my (our?) next visit!