If you want to get yourself lost in some unknown confines of Bourgogne/Burgundy, live the slow life and savour real traditional food at ridiculously low prices, I would strongly recommend you to discover the minuscule city of Saint-Martin du Mont lost in the middle of Bresse east of Louhans, a region which has given its name to the most famous cicken in the World.

If you opt for a set course you have a choice between three dishes for 15 Euros or four dishes from 20 Euros. Children can have their own menu for 8 Euros! 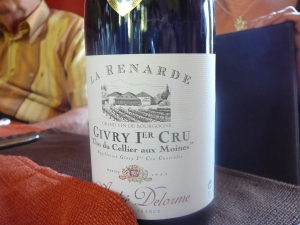 Wines at the Auberge du Moulin are mainly from the Cote Chalonnaise, probably the best value when it comes to Bourgogne wines. We were quite a few for lunch on a Saturday and we opted for a succulent Givry !er Cru (my own village!), La Renarde, Clos du Cellier aux Moines, Red, 2004.
The perfect wine to go with some really hearty food we ordered: 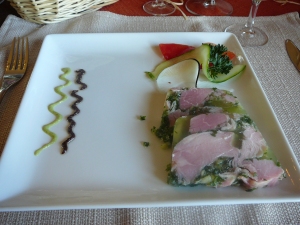 “Jambon persille au vin de Chablis”/Ham in its own jelly containing parsley and Chablis wine. The Chef, Jean-Jacques Martineau who practically works on his own in his kitchen, makes his own ham from local pigs! A typical Burgundian hors d’oeuvres ( a main dish in many homes!)!

“Terrine au poivre vert”/Green pepper terrine. When you see such a big hors d’oeuvres sitting on the table in front of you, you start wandering if you will be able to go through the whole meal!

“Meli-melo d’escargots et moules, sauce au Roquefort”/Marriage of snails and mussles in Roquefort blue cheese sauce. When sea meets land under the benediction of a ewe! 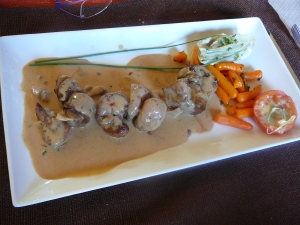 “Rognons de veau”/Veal Kidneys. Tender and juicy in the perfect cognac and cream sauce. An acquired taste? I did not personally oredered it, but I certainly would not mind!

“Cuisses de Grenouilles”/Froglegs. Another Burgundian specialty with a little accent from the South. Sauteed in olive oil, you eat them with your fingers! 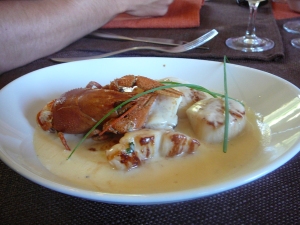 “Cassolette de Saint-Jacques au Noilly Prat”/Scallops in Noilly Prat and cream sauce with a crawfish! Another meeting between land (river, actually!) and sea!

“Salade bressane”/Bresse salad. A very local (we are in the heart of Bresse) hors d’oeuvres which makes for a real meal at home: Ggeens, bacon, poached egg, chicken liver and garlicked toast. 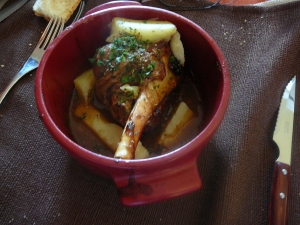 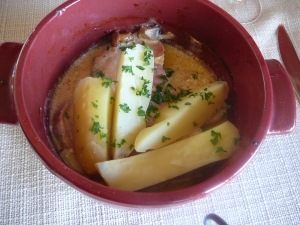 “Travers de porc laque/lacquered pork”. A dish that would tempt the likes of Foodhoe and Gaijin Tonic!

“Profiteroles au chocolat”, a dessert that would start Bill cooking! 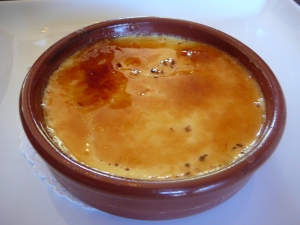 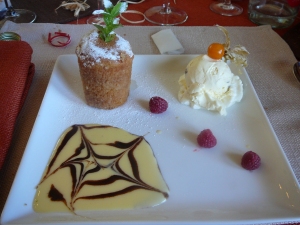 “Baba au rhum”. This was my dessert! I had almost to be towed out, as full as I was! 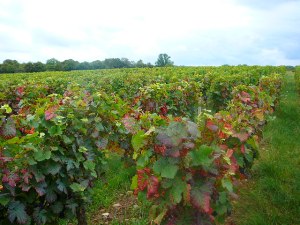 Chalon sur Saone in Bourgogne/Burgundy, France, has given its name to the Appelation Cote Chalonnaise, which, cent for cent, has become better value than some overblown Bourgogne vintages. Actually, the city itself stands a good 10 km away from the first vineyards. That might explain why Chalon Sur Saone was rarely mentioned in gastronomic guides until recently.
It certainly was a pity as the very central position of the city gave it the best access to all food ingredients that have made Bourgogne so famous. 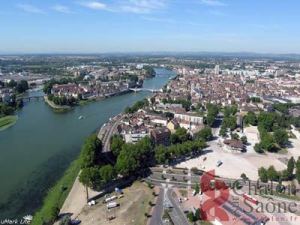 But then, about ten years ago, the trend completely changed. The reason is the Saint-Laurent Island in the very middle of the very wide Saone River within easy reach thanks to the bridge of the same name.

Its main street, Rue de Strasbourg suddenly became the place to eat and drink out because of its great tranquility away from the bustling centre. The street presently counts more than twenty restaurants of all kinds.
I’m particularly fond of L’Essntiel, which as its name indicates, serves generous plates of very traditional but precise Burgundian gastronomy. And this at very reasonable prices.
The last time I went there was in the company of five of my siblings and the Missus, which allowed to sample quite a few of their offerings made the more tempting by the genuine friendliness of the owners and staff:

Seabass on a bed of apples and pears.

“Sandre” fish with a potato “curtain”.

Veal Sweetbreads, my personal order. Enormous, but so nice and cruchy outside and so tender inside!

Beef Fillet with baked tomatoes and couscous. This pic does not justice to the real size of the fillet. It was certainly twice a big and as high at the very large tomatoes! 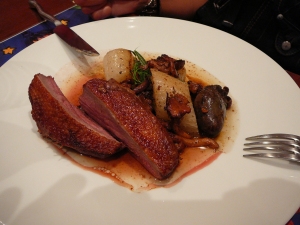 Roasted Duck with its liver and heart.

Escargots with echalottes and garlic confits.
Sorry, after that, I just either could not find the time to take picture,s or I wasn’t “allowed” to do so by my so-friendly siblings.
But have no worry, it will take you quite a few visits to sample everything! And do not forget the desserts!
And the wine list!

Incidentally, Chalon Sur Saone, apart of its very long history as the last port up the Saone River for the last 2,500 years is renown for one very important invention. Can you guess?
-The first-ever picture and camera you can see at the Musee Nicephore Niepce which contains more than two million pictures!