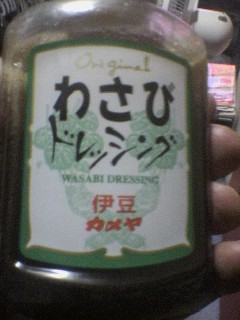 Shizuoka has claimed world fame for being the first to grow wasabi in the 17th Century (in yutogi, Shizuoka City exactly) and for producing more than 80% of the wole Japanese output, but people tend to forget that it can be put to many uses apart of using it for sashimi, sushi and the ubuquitous makisushi/rolled sushi!

One more great use has been initiated in Mishima City in eastern Shizuoka Prefecture: Wasabi Dressing!

It is not at all hot, but almost sweet and makes great accompaniment for any salads, on omelettes (Japanese or traditional) and mixed with sauces. I (and my better/worse) half ae still disovering more usages!

Definitely worth a try! Moreover it contains a crowd of healthy ingredients!