This was our second trip to Yakushima Island in 4 years. There are two ways to reach this Japanese World Nature Heritage: either you fly all the way (with a changeover at Kagoshima Airport), or top in Kagoshima City (Kyushu Island) before boarding on a three-hour voyage.
Both ways may become dodgy in bad weather as planes might easily be cancelled due to poor visibility, while the same could happen to the boats due to rough seas during the typhoon season. After all, the yearly rainfall (10,000 mm, yes you read it well!) is four times the average for the rest of Japan!
Our first hotel bus being scheduled at 15:30, we took the opportunity to take lunch at Il mare, an Italian restaurant conveniently located within 10 minutes walk from the very small airport.

Il Mare relocated in 2006 to the present spot along a “busy” road running past the airport for the benefit of travellers.
The food is of a surprisingly good level for a tourist resort, with pasta and pizza all home-made!
The Missus opted for Asahi crab ( a local specialty) Linguine and seemed to be pretty satisfied with it.

I, for once, chose a Quatro Formaggio Pizza, which I must admit was a lot better than some served in vaunted restaurants in some big cities!

Actually, Il mare is a good proposition any time you want to treat yourself to a non-japanese meal as the restaurant is located in a small park with its own herb garden!

for breakfast and partly so for rest of the day.
-Strong points: One of the best hotel parks in Japan! Natural hotsprings (indoors and outdoors)

As this was our second trip we kept to proven values by stopping in the same hotels.
The Iwasaki Hotel is surrounded by a truly enormous forest/park stretching half way up the neighbouring mountains (over 900 m).

A complete tour of the park will take you almost two hours includind a waterfall, oranges orchard, a small enclosure for deer, and thousands of trees, plants and flowers. Don’t forget your camera!
We were just left enough time until dark to take a good walk before we took a long dip in teir hotsprings baths (genders separated, sorry! LOL). The water directly comes from a subterranean volcanic waterbed. Its water is claimed to help alleviate nervous (physical) problems, painful joints and skin disorders.

Then, it was time for dinner:
Iwasaki Hotel proposes a seasonal menu and a la carte menu for dinner featuring local specialties such as “kuroge Buta/Black Hair Pork”
and seafod sashimi from fish caught in the waters surrounding the island.
Among the dishes we shared (portions are large enough) were: 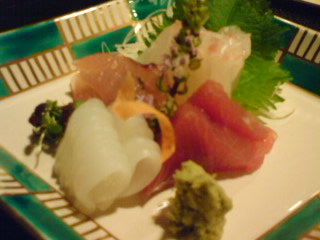 The Sashimi Plate included (from left to right, bottom to top) Mizu-Ika (local name for Aori-Ika/Cuttle fish variety), Maguro, Tobiuo (Flying Fish), a specialty of the island and Tai/Snapper Seabream.

Tempura with plenty of large prawns!

Finally, the seafood gratin was more of a French imspiration with a Japanese touch provided by the flying Fish Roe topping.

The real eating and drinking were scheduled on the next day for the Missus’ birthday!