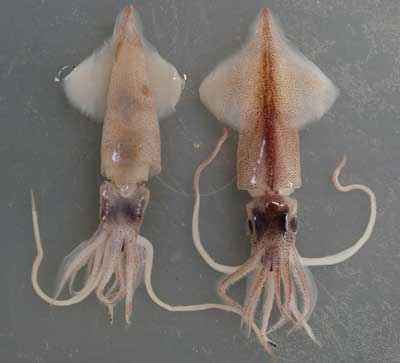 Here we go again with this series called “The Jacques Cousteau” upon suggestion by Jaded Fork and forBread + Butter, and Elin who don’t mind being on a long haul! LOL

Sparkling Enope Squid is a name difficult to remember and the translation of the Japanese name, Hotaru Ika/蛍烏賊 or Firefly Squid, certainly holds a better sound and is more adapted to reality.
It is also known as Matsui Ika in Toyama Prefecture.

The Sparkling Enope Squid is the only species of cephalopod in which evidence of color vision has been found. While most cephalopods have only one visual pigment, firefly squid have three, along with a double-layered retina. These adaptations for color vision may have evolved to enable firefly squid to distinguish between ambient light and bioluminescence.

The fishing season lasts from Spring to Summer. The annual catch varies between 4,500 and 6,500 tonnes.

They are very popular boiled as a snack or cooked in soy sauce and sake. You can of course cook them in wine or tomato sauce, European-style. 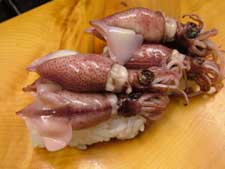 They are very much much appreciated raw and whole as sashimi or lightly boiled as sushi on nigiri!