Shirogisu, or Sillago in English probably has as many Japanese names as English names.
The Sillago found along the Japanese shore is also called sillago japonica, Whiting or Smelt-Whiting in english, Shirogisu, Kisu, Magisu and Kisugo in Japanese.

The best specimen in Japan are caught in Fukuoka (Kyushu) and Ehime (Shikoku) prefectures from Spring to Summer. 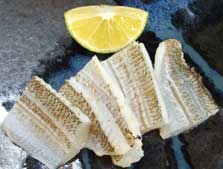 The greatest part of the sillago catch comes from Indonesia, Korea, Thailand, China and other Asian countries.
Fortunately, here in Shizuoka, we do catch a sizeable amount in Suruga Bay guaranting fresheness in season. 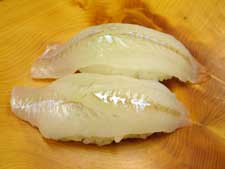 If absolutely fresh, shirohisu/sillago makes for an interesting moresl, the more for it as it is quite rare in this form.

The most popular way of savouring it is as tempura or breaded and deep-fried, although the fish taste will vary greatly with freshness!