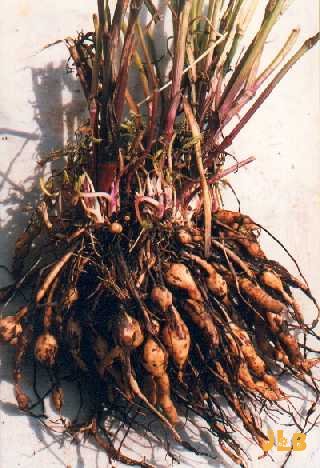 SYNOPSIS:
Organic agriculture and biodiversity have in recent years brought about a rediscovery of many “forgotten” vegetables that people especially in Europe and France conscientiously tried to forget as they reminded them of the privations suffered during WWII. The same people had then to make do with untraditional vegetables because potatoes, carrots and so on were confiscated by occupying forces or their own armies.
With sustainibility and bioagriculture made more important by the deficiencies of modern mass agriculture, those “forgotten” vegetables have suddenly come to the fore for the pleasure of all, and that of course of vegetarians and vegans!

The Chataigne de Terre (Earth Chestnut in French) or Bunium bulbocastanum in latin is a truly rare vegetable, even in Europe where gardeners, more than farmers, grow it in France and Belgium notably.

It is an ombrelliferea and is also cultivated as a decoration garden plant.

The plant, wit comparatively few leaves can reach a height of 30~70 cm (1~2 feet).
It blossoms in Autumn with beautiful white flowers.
After seeds have been formed, the arial part of the plant will dry out.
It is then than one can find many tuber-like (they are not true tubers) nodules coming out of the roots when the whole plant is pulled out the earth.

These can be eaten raw after being washed in clear cold running water.
They have a distinctive chestnut taste and are greatly appreciated as a snack (for aperitif!)

They also become an ingredient for the German Liqueur called Kummel!