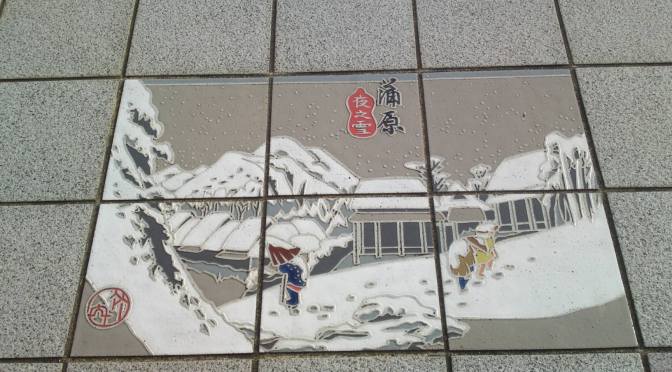 Utagawa Hiroshige/歌川 広重 (1797 – 12 October 1858) (real name: 安藤 広重/Ando Hiroshige) is probably the most famous ukiyoe/woodblock print artist when it comes to describing travel scenes in Japan.
When it comes to Shizuoka Prefecture where a Museum is dedicated to him in Yui, Shimizu Ku, Shozuoka City, the Fifty-three Stations of the Tōkaidō immediately come to mind.
And if you look carefully you will find them represented in the most unusual places!

Now, take the Tokaido Railway Line and get off at Shin Kambara Station in Shizuoka City, Shimizu Ku!

The place is famous for its cherry trees.
Did you know that the cherry trees offered to the US in Washington are all the scions from a single tree from nearby Okitsu, Shimizu Ku, Shizuoka City!

Travelers of yore added onto one of Utagawa Hiroshige’s prints!

Now go the pavement along the station and you will discover the world of Edo at your feet!

Find this set of tiles and proceed to its left to discover them all in their right order!

Leaving Edo : Nihonbashi, “the bridge of Japan”!
We are still in present Tokyo!

9th station : Odawara (Crossing the Sakawa river at a ford.)!

We enter Shizuoka Prefecture from now on:
11th station : Mishima!

32nd station : Shirasuka (presently in Kosai City)!
This is the last station inside Shizuoka Prefecture!

48th station : Sakashita (presently in Kameyama City)!
This is the last station inside Mie Prefecture!

53rd station : Otsu!
This is the last station inside Shiga Prefecture!

The end of the Tōkaidō: arriving at Kyoto (actually at the tme Sanjō Ōhashi (the bridge spanning over Kamo River) at Keishi (“the capital”)!