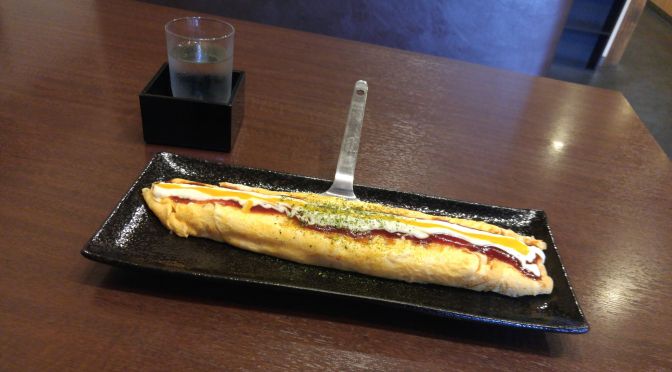 Having some time on hand before an assignment in Shimada City I decided to make a quick visit to Tonbo, a popular Osaka-style restaurant near the JR Station and sample something new!
“ふわふわ卵ロル”/”fuwafuwa tamago roru/””fluffy egg roll! Interesting!
It came in two varieties, one with “ぶた”/”buta”/”pork” and “ぶたチーズ”/”buta chiizu”/”pork and cheese”!
I opted for the pork one this time!

The chef first of all fried some pork rashers on a very hot plate and seasoned it with his special sauces (one secret chefs will never tell you!)!

Once the pork has been cooked he pushed aside onto a cooler part of the plate.

He then spread beaten eggs (3, I think) and started working quickly as obviously the eggs should not be overcooked. For all its simplicity it does need a quick and experimented hand!

Then the eggs are carefully lined with the pork near the inside edge. 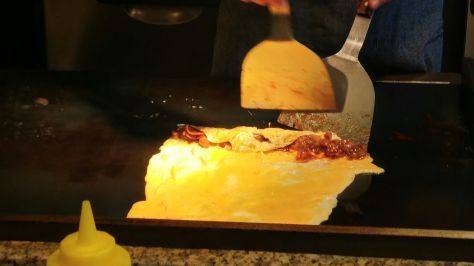 Then the inside edge of the eggs is carefully rolled over the park with the help of metal spatulas.

The chef keeps rolling the lot carefully as quickly as possible.

The top of the roll has been pasted with at least three sauces and sprinkled with fine herbs.

You are provided with a metal spatula to cut it yourself along to your liking!

At 670 yen, very good value when you consider the volume sufficient for two and the simple and great taste!
To be savored with beer or local sake!