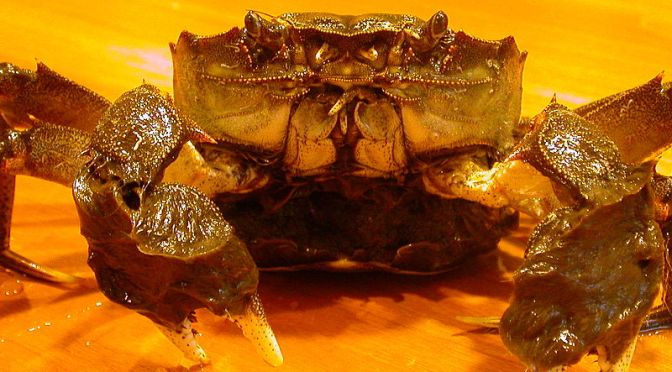 This crab goes by the latin name of Eriocheir japonica (De Haan, 1835). It was first recorded outside Japan by a Dutch researcher.
It also goes under the name of 上海蟹 (Chuugo mokuzugani/チュウゴクモクズガニ) although this can also be read as “Shanghai kani” because such specimen come from China. Not to be confused!

Japanese Mitten Crab or Mokuzugani in Japanese is also called Mokuzou, Zugani, Tsugani or Kegani.
It caught alsmost everywhere in Japan in Autumn and Winter.
In Autumn the females come to lay their eggs at river mouths.
Plenty are found along the Izu Peninsula in Shizuoka Prefecture.
They are caught in boxes baited with fish.

As for food, they can be eaten boiled in soups or crushed with their shell and cooked with miso. They could even be prepared as French bisque. 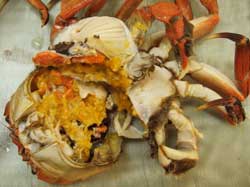 The female specimens are particularly appreciated for their egg sacs.

These boiled egg sacs with the meat make for delicious sushi nigiri or gunkan!