With the first days of Autumn upon us, Kampachi or Amberjack is appearing on our plates in Japan!

The fish seems to have so many names in any language: Amberjack, Purplish Amberjack, Yellowtail, Greater Yellowtail, and Ruderfish in English, whereas in Japanese it is called Kampachi, Akahana, Kampa, or Shokko among others, not accounting for regional names!. 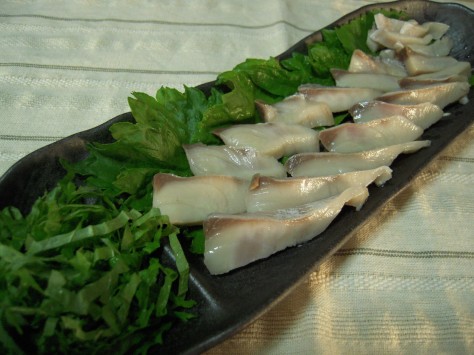 It is caught along Central and South Honshu Island, including a lot in Suruga Bay in Shizuoka Prefecture!
It is a very popular fish as it happens to come just in between Hiramasa/Young Japanese Amberjack-Five ray Yellowtail in Summer and Buri/Mature Japanese Amberjack-Five Ray Yellowtail in Winter, making a favourite for the season, but bringinga lot of confusion on foreign tables because of the similar names.
Kampachi (Seriola dumerili (Risso) in Latin) and Buri (Seriola quinqueradiata Temminck and Schlegel in Latin) are very similar but their season is different. Beware of scams! Actually the meat looks different. 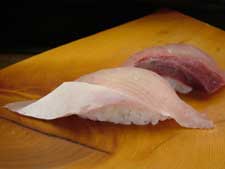 Natural Kampachi is quite rare in Japan these days whereas human-raised are plenty.

Kampachi is savoured in many ways: Sashimi & Sushi, Grilled (Yakimono), Simmered (Nizuke), Meuniere and fried.
Choose comparatibely small specimens. Beware of the large cheap specimens!
Ask for a variation in Sushi called “Kampachi Aburi”?kampachi lightly grilled on one side: a beauty!