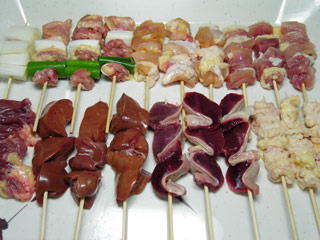 Looking at my friends Island Vittles and Skewer It! blogs on yakitori I decided to start a series on that worldwide known Japanese specialty that is “Yakitori/焼き鳥/”Grilled Chicken”.
I hope that this series of postings on various basic recipes will help her and all other foodies interested in that simple, healthy and so delicious delicacy!

This particular series will deal with the cutting techniques which should help you make your own yakitori at home!

“Negima/葱真” liteerally means “leeks in between”.
It is a very popular way of preparing yakitori and provides a great nutrition balance.
Note that negima can also be written 葱鮪 which means that tuna is used instead of chicken. Some people argue that it was the original form of negima!

-One uses the neck meat from the chicken. I told you taht everything can be used. If you don’t believe me, wait until the next postings! LOL
-Choose a long and comparatively thin leek with a clear white and green part. 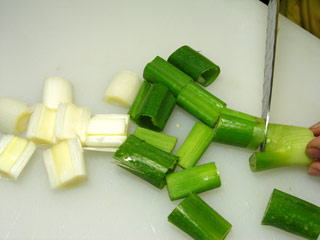 -Cut the leek into 25 mm/1 inch pieces.
-Keep white and green pieces separate.
-If the white part is too thick, cut in half as shown in picture. 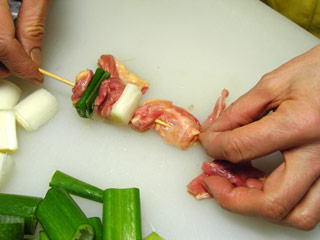 This will provide even exposure to the fire/grill

As the white part of the leek is longer skewer them separately for a nice combination! That latter is called “ikada”.
One meat skewer should weigh about 30 g.