Tea growers are early-risers!
Since Marufuku Tea Factory (Shizuoka City) in the person of Ms. Asami Itoh/伊藤麻美 had kindly invited me to attend and interview at the official first day of the new tea auctions (officially) held today (April 25th) I found myself the only European (journalist) present at the early hour of 6:30 a.m.!

The event was held at the simply named Shizuoka Tea Building whose premises, inside and outside, were already crowded to the limit!

More than a participant was glad to buy and grab some breakfast/brunch (Japanese-style!)!

Another even bigger project called CHA 88 (coming report!) took the opportunity to advertise itself!

This event held by the whole of Shizuoka Prefecture was inaugurated on the 23rd!

One could enjoy the sight and demonstration of tea massage by an expert!

As a special guest I was wearing a cap with Marufuku Tea Factory written on it (the only journalist offered the privilege that day!)!

All the names of the union member tea companies for an easy check!

And plenty of explanations on the different tea varieties!

The official “tea Ladies” of the day! Pretty, aren’t they?

Even the “big guns” had come early: Shizuoka Governor Kawakatsu!

This was before the “official speeches”. People got very serious then! 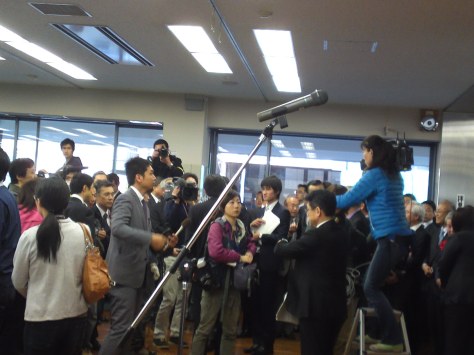 As for the press, TV and other journalists, this was open war! I can’t say I was impressed with their manners… And people think that the Japanese are the epitome of politeness…

The auction room was divided into regions/territories (in Japanese parlance!) for good order!

Now for real business:
The blue caps are for individual sellers, the yellow ones for buyers and the green ones for the JA and other big government-controlled farm cooperatives. 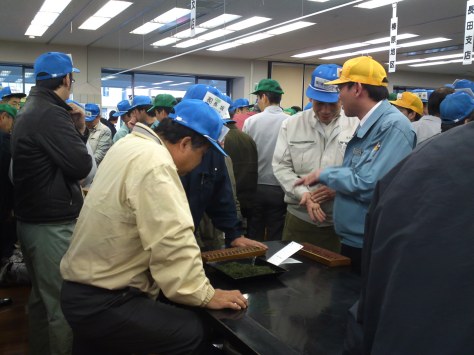 Checking the samples and their price tags! 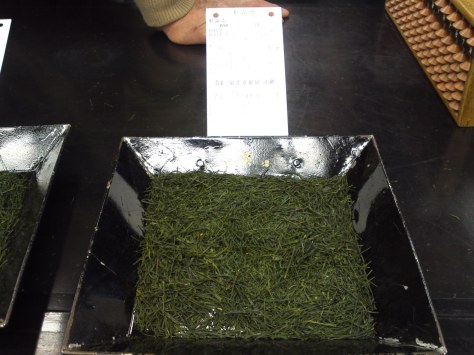 A sample of fairly good tea.

All transactioins and bargaining done with old-fashioned abacus/”soroban” in Japanese. A very practical system, actually! 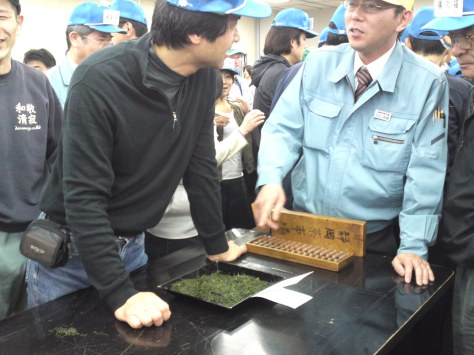 There are some great pictures to be taken at such an event!

Note: This year’s tea is of a very good standard as opposite to last year’s disappointing crops!

Next report will be in the tea-fields picking up the Ichiban Cha (First leaves of the year)!