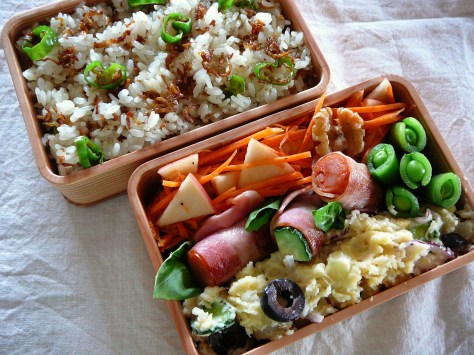 The Japanese are very fond of steamed shirasu/シラス, sardine whiting, which is a Shizuoka specialty, and often mix it with their rice.
I like shirasu but I don’t appreciate it as such when mixed with rice as the “fishy” taste is too strong for me.
The Missus has come with an easy solution: she fries it before including it to the rice! 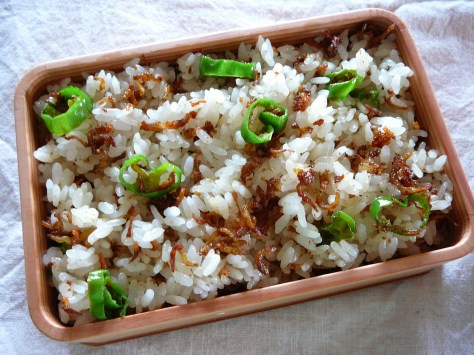 Therefore the Missus fried some steamed shirasu she had bought at the supermarket in oil and spices and let it cool.
She steamed the rice, and once ready, mixed it with the shirasu and chopped green pimentos.
It does make for good colors and great dietetic balance!

Unfortunately you can’t see them, but the Missus laid three leaves of violet endive/chickory to use as vessels for the different ingredients of the side box!

She filled the top one with shredded carrot, thin-sliced apple and walnut. Even with dressing I considered it as my dessert!
She lined the middle one with basil leaves on which she placed three small pan fried rolls consisting of bacon rolled around cucumber for one of them and the other two rolled around fried chorizo sausages fo supplementary zip. She added boiled snap green peas/green peas in their pod for more color and fibers/vitamins.
As for the third endive leaf she filled it with potato salad also containing sliced black olive and cucumber.

As usual a very colorful bento.
Moreover, it was not only yummy but very well-balanced!
With all that praise heaped on her the Missus will become suspicious!