Do not forget to activate the captions

. Today is the part 1 of our short video/documentary about Roger Voltz, Martial Arts Specialist and Noh Masks Carver. This video focus on two points.

1: The legend of Hagoromo, taking place in Miho No Matsubara which was registered as a part of Mt. Fuji’s world heritage site in June of 2013. 2: A short introduction of Roger Voltz, how he made is way to Japan and his particular relationship with Martial Arts and Noh Masks. The Second point will be developed in the next video that will be released soon

. The third video Roger will go further into the masks creation process. Stay in tune ! 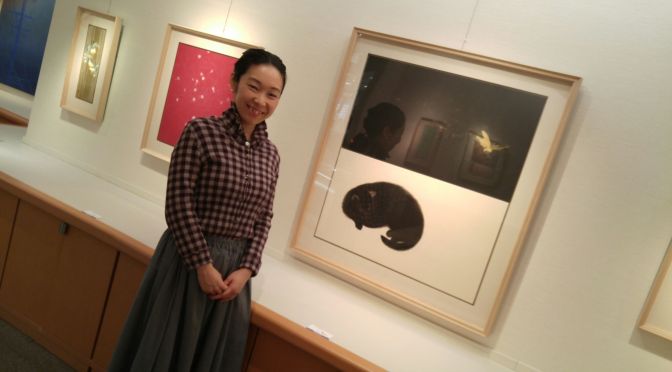 Pictures all taken by Robert-Gilles Martineau with the authorization of Ms. Kyoko Imagawa and Matsuzakaya Department Store in Shizuoka City
General explanations of Nihonga taken from Wikipedia.

Nihonga (日本画 Nihonga) or literally “Japanese-style paintings” are paintings that have been made in accordance with traditional Japanese artistic conventions, techniques and materials. While based on traditions over a thousand years old, the term was coined in the Meiji period of the Imperial Japan, to distinguish such works from Western-style paintings, or Yōga (洋画 Yōga).

Nihonga are typically executed on washi (Japanese paper) or eginu (silk), using brushes. The paintings can be either monochrome or polychrome. If monochrome, typically sumi (Chinese ink) made from soot mixed with a glue from fishbone or animal hide is used. If polychrome, the pigments are derived from natural ingredients: minerals, shells, corals, and even semi-precious stones like malachite, azurite and cinnabar. The raw materials are powdered into 16 gradations from fine to sandy grain textures. A hide glue solution, called nikawa, is used as a binder for these powdered pigments. In both cases, water is used; hence nihonga is actually a water-based medium. Gofun (powdered calcium carbonate that is made from cured oyster, clam or scallop shells) is an important material used in nihonga. Different kinds of gofun are utilized as a ground, for under-painting, and as a fine white top color.

Initially, nihonga were produced for hanging scrolls (kakemono), hand scrolls (emakimono) or folding screens (byōbu). However, most are now produced on paper stretched onto wood panels, suitable for framing. Nihonga paintings do not need to be put under glass. They are archival for thousands of years. 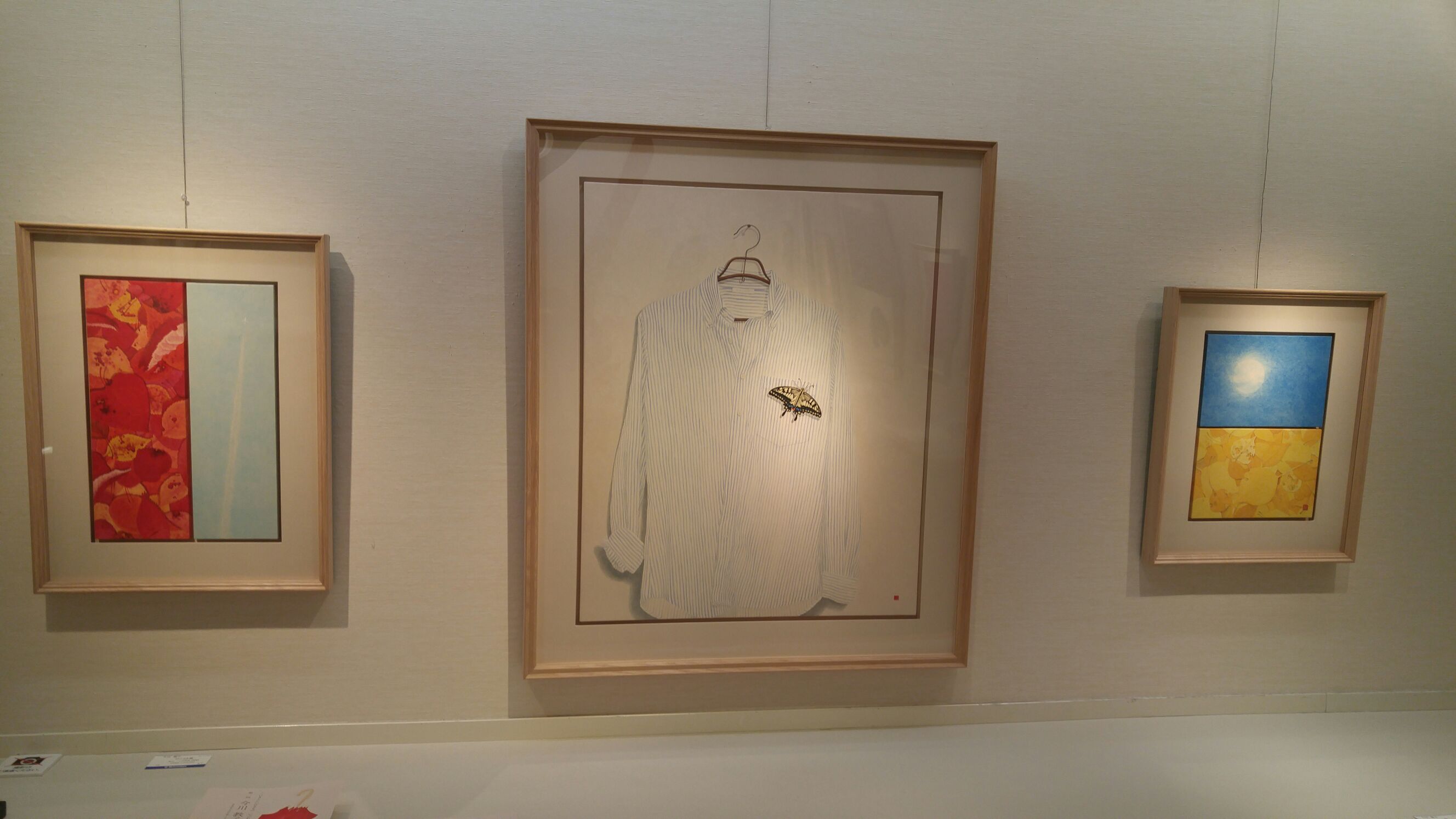 I have followed the progress of Imagawa Kyoko/今川教師子さん, a young artist born in Shimizu Ku, Shizuoka City, for some time, attracted as I was by her original approach to the art while keeping to its traditional rules and had the pleasure to meet her again in person at Matsuzakaya Department Store (Honkan/Main Building, 6 F) during her latest exhibition held February 24th~March 1st.
For all her young age she is already an 11-year veteran of that demanding art (see personal history end of the article) but she is so modest and easy to approach that it becomes a real pleasure talking art with her!

Like many modern Nihonga artists she has brought her own techniques and preferences to her art, rendering it attractive to all genders, ages and nationalities.
I definitely plan to interview her again soon in her atelier in Shimizu Ku, Shizuoka City, but for a start let me show some of my favorite masterpieces before they disappear from our City as the exhibition was also quite successful!
I will not bother too much their individual names, but concentrate on my personal opinions and feelings! 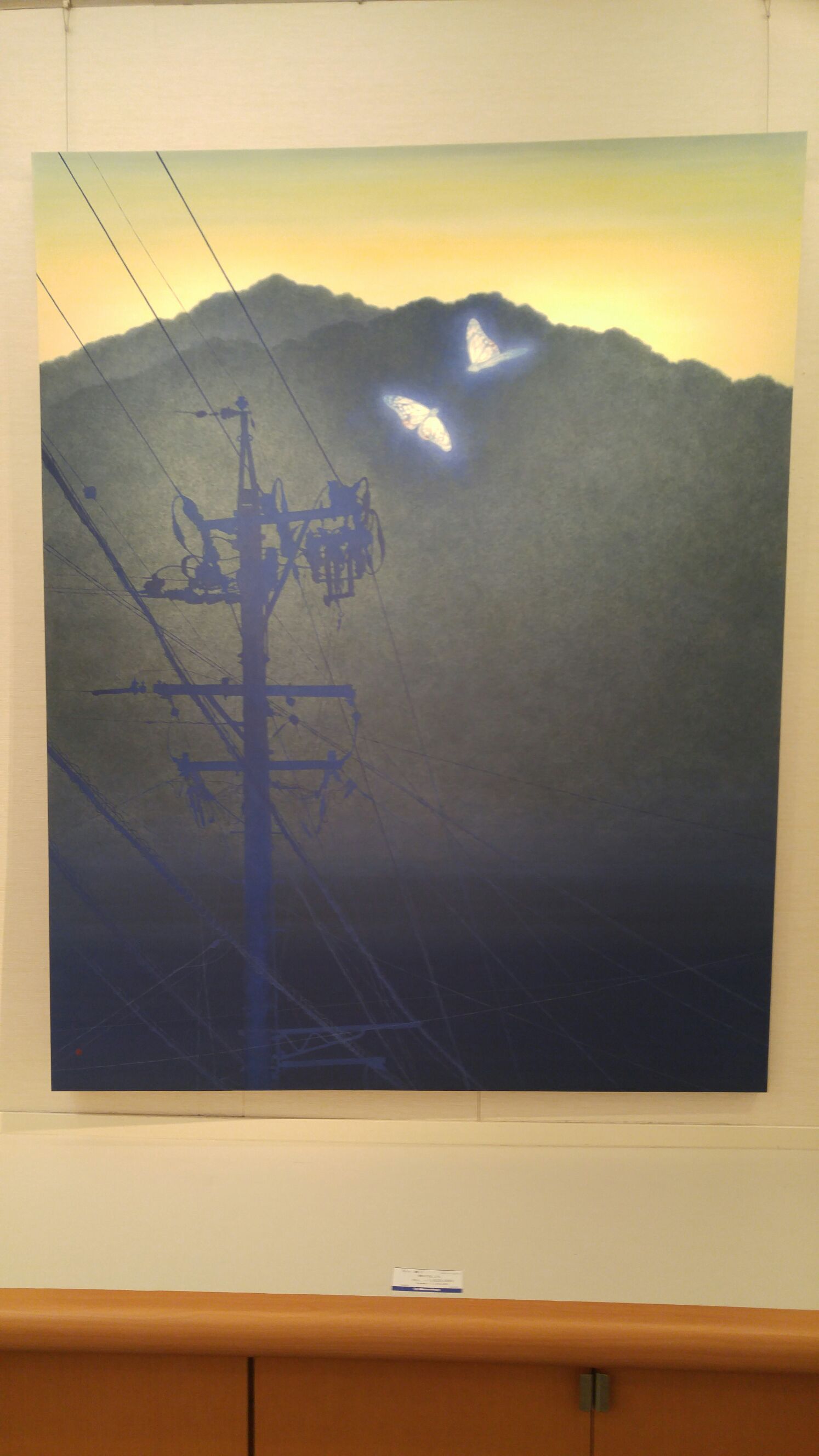 I mentioned her the English saying of insects burning themselves to death on the light of candles, and Kayoko nodded in agreement! Now, who could be those butterflies dangerously fluttering near electric cables?

She explained that this particular exhibition’s purpose was to express her will to enjoy life through our ever-changing modern society of our age.
Her paintings are songs expressing her life in different seasons and places.

One of her typical contrasts between an intricate creation and a seemingly simple counterpart. 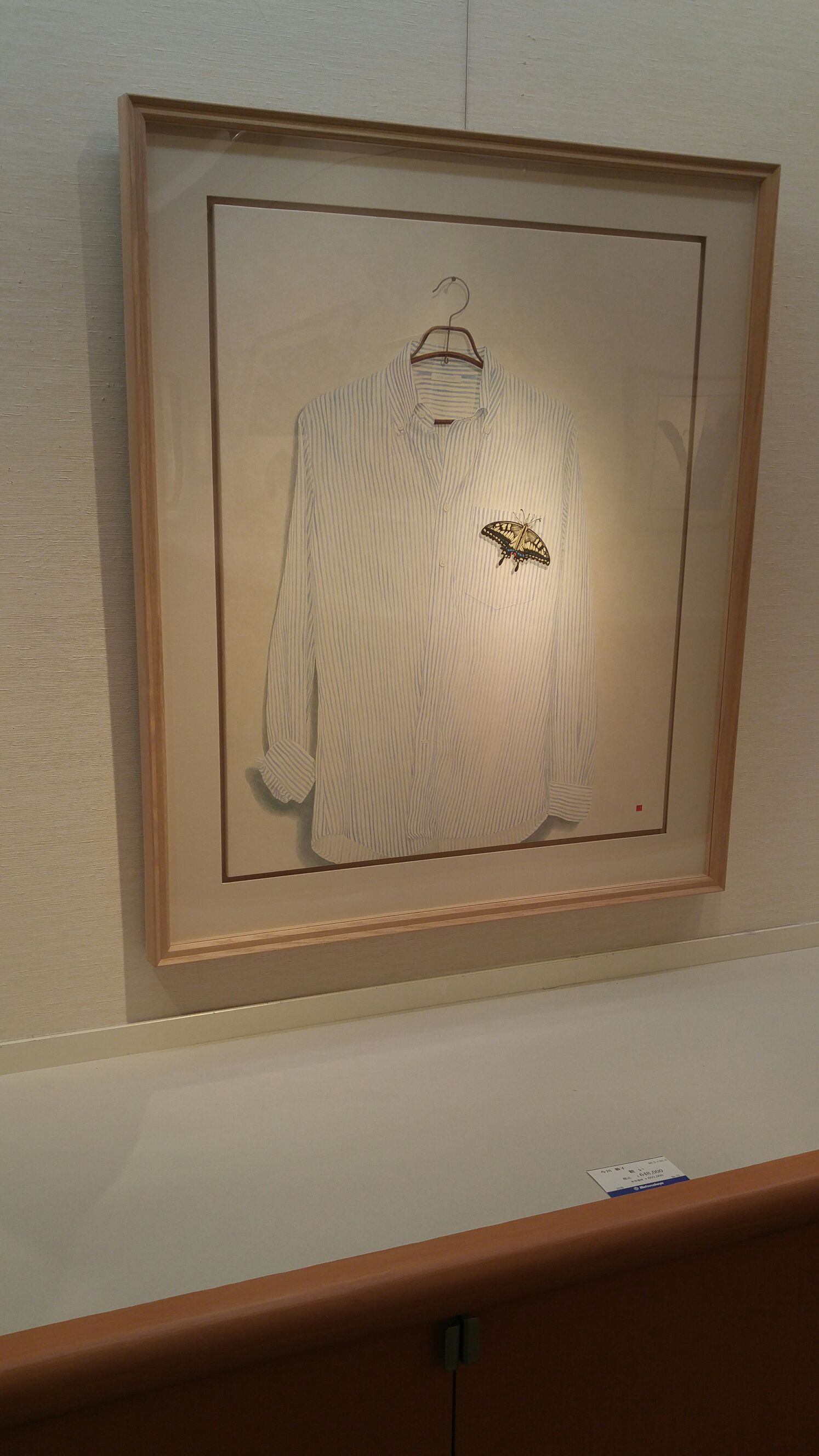 When i pointed that the shirt was man’s garment she readily agreed but surprised me by revealing that the butterfly was a brooch!

This contrast between the blue and the yellowish ocher is so Japanese!

The feather discovered below the tree? 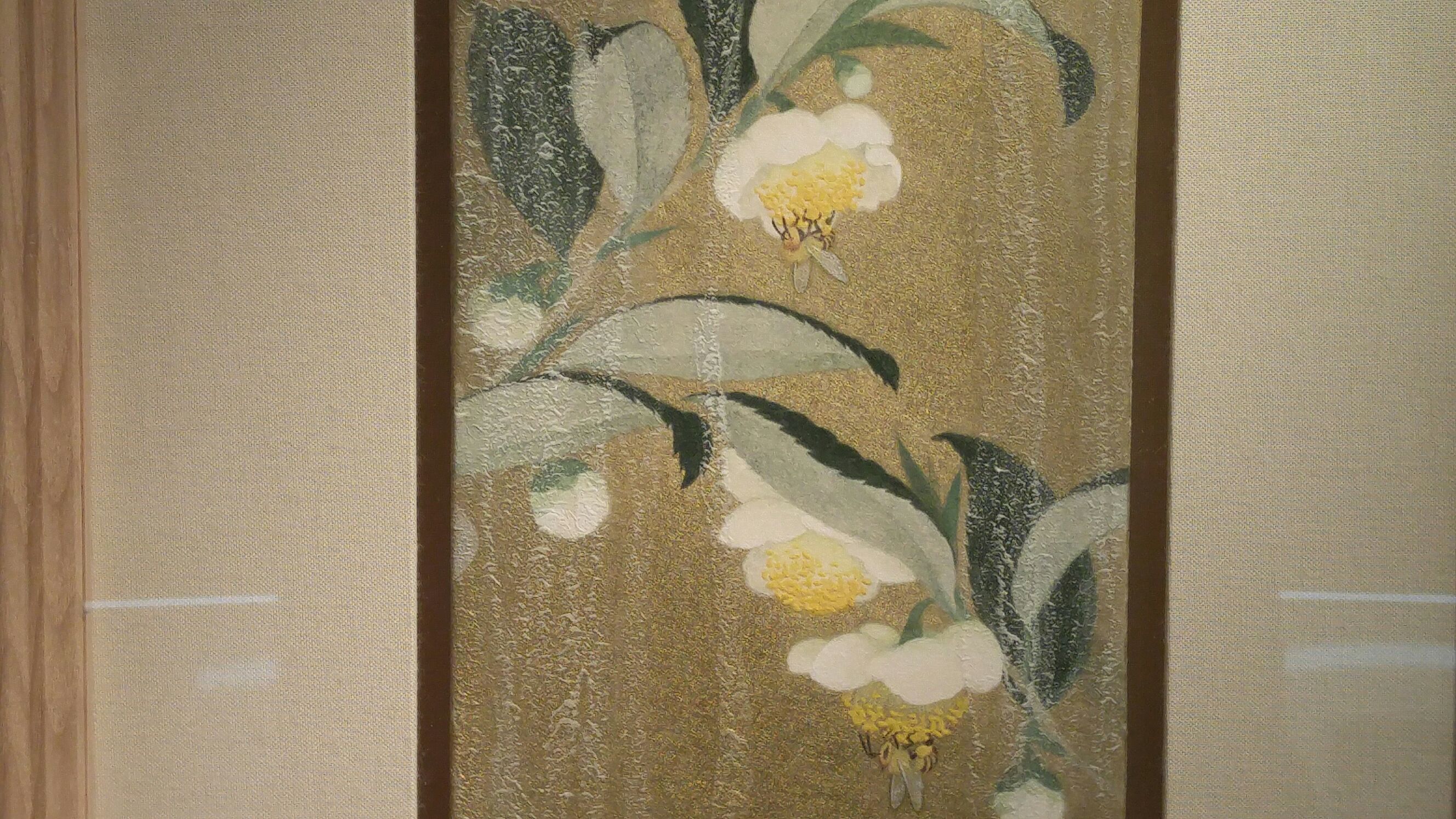 Now, tea flowers will nly be painted by the Japanese as growers leave some on the tea bushes in Shizuoka Prefecture contrary to tea plantations in the rest of the world!

Now, this cat has a real story! Kayoko picked it up a few months old on a street where it had been hit by a car! A very healthy animal now!

We talked a long time about this particular painting!
What would you say of a dragonfly perching on a cup of tea in a very feminine pink environment?

Fireworks and a lizard! Definitely a summer scene!

Have these cranes crossed the seas to fly in front of Mount Fuji? 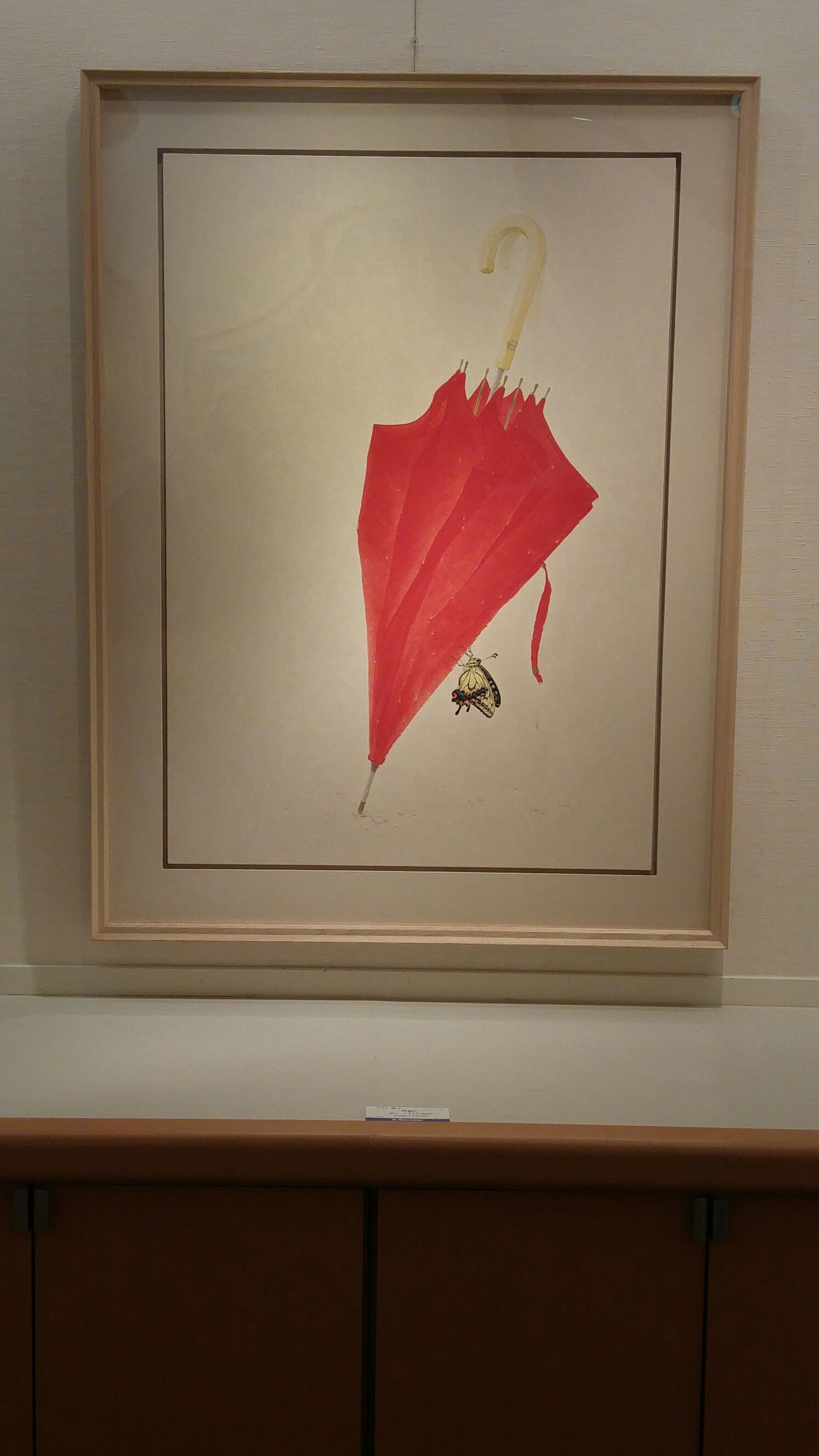 A favorite of mine! Clear skies after the rain?

A longed-for letter in the Spring?

these are real paintings!
I leave it to you for deciding the many interpretations!