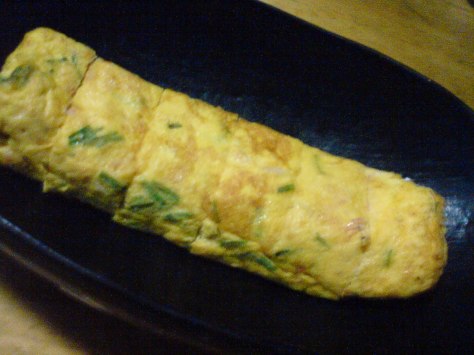 For once, the Missus accepted I took pictures while she made a batch of tamagoyaki/Japanese omelette since yesterday was a national holiday and we had decided to take it as easy as possible for the whole day!

Unforunately I can’t say that the pictures are very good, as I had little time to take them in the dark kitchen with a mobile phone. A real camera would have taken too much time, and eggs cook quickly! 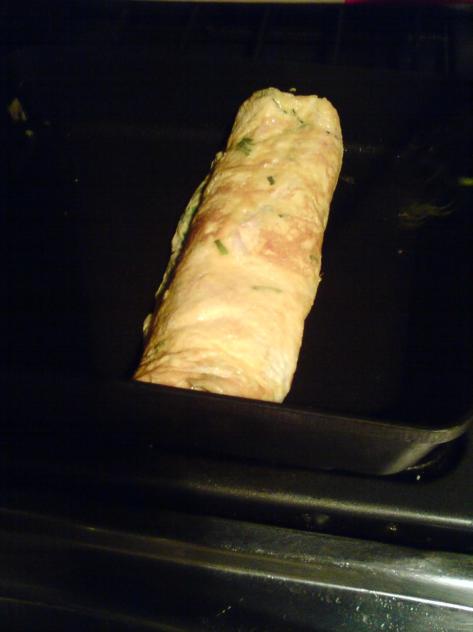 The Missus used 3 eggs for the whole tamagoyai. She beat them with some water (3 tablespoons), a little milk (1 teaspoon), salt ( a pinch) and sugar (1 teaspoon).

Instead of making them plain with the above ingredients, she added plenty of chopped ciboulette/chives that the Japanese have come to grow recently.
She included the sakura ebi/cherry shrimps I had bought at the local supermarket while she was having a rest (she spent the day clearing things at home, her notion of taking it easy for the day!) after having added some sake to them.

She served them with a little momjioroshi/grated daikon with chili pepper.
Next time she makes them it will be easier to convince her to write a posting on them as I’m planning to help her with her own (Japanese) blog!

Interestingly enough, the Japanese call Liver, “rebaa” and Heart, haarto”, which nothing less than the Japanized pronunciation of the English words!
Naturally, liver in Japanese is “kanzou” and heart “jinzou”, but this refers more to anatomy than gastronomy!

It goes without much saying that you have to use absolutely fresh ingredients!
First wash in clear running cold water.
Peel off the soft thin skin off the heart and cut/discard any veins or blood vessels.
Take off fat but only within reason as it contributes to tasty morsels!

Separate the liver lobes.
Discard veins/blood vessels if you discover them. 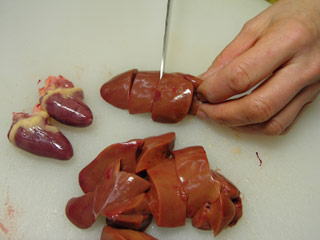 Cut the lobes across into pieces big/small enough for easy grilling.

Cut the hearts legthwise to two thirds of their thickness as shown on above picture.
Discard any veins/blood vessels or blood matter.

Skewer the hearts with a stick. Two of them should be enough.
It is easier than it looks.
You may skewer the livers and hearts together but you will ened up in uneven cooking. Better separate them!

Skewer the liver with a stick. Three pieces is best for balance.

Now, you could make the sticks longer and the pieces bigger or liver and heart whole, but personally, the smaller the yummier it looks!
These are more or less appetizers, after all!

Gizzards are the two sticks in front. The back two are liver.

Looking at my friends Island Vittles and Skewer It! blogs on yakitori I decided to start a series on that worldwide known Japanese specialty that is “Yakitori/焼き鳥/”Grilled Chicken”.
I hope that this series of postings on various basic recipes will help her and all other foodies interested in that simple, healthy and so delicious delicacy!

This particular series will deal with the cutting techniques which should help you make your own yakitori at home!

Bear in mind than some ingredients such as skin or gizzards might not be considered proper or healthy in some cultures!

First clean the gizzards in fresh running cold water.
Cut out the red parts on both sides, left and right as shown in picture and discard.

Cut in half as shown above.

Pass the stick through each cut folded in two with the white part inside as shown above. This will prevent the gizzards from folding out. Count 3 to each stick.