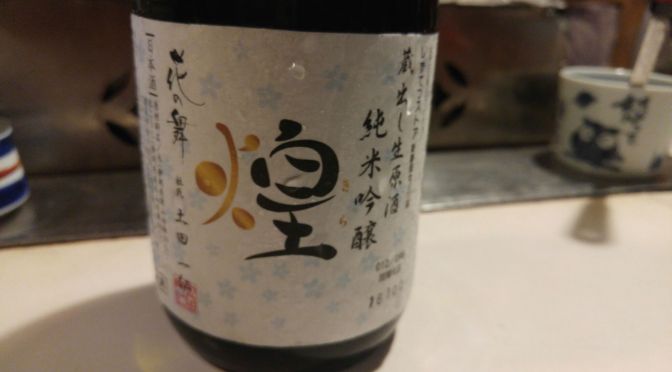 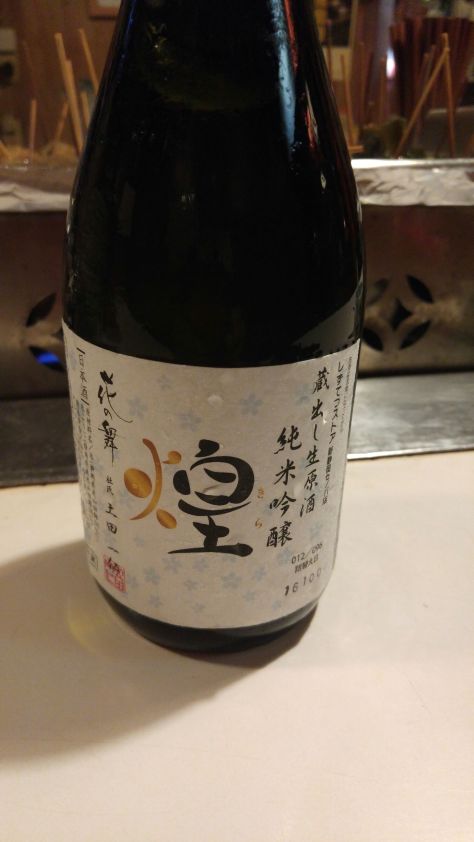 I just had the opportunity to taste a very unusual, that is for that establishment, by Hana no Mai Brewery in Hamamatsu City, in my usual not so secret lair!

The name, ”煌”/”Kira”, could be roughly translated as “bright” and is increasingly used in names.
The sake was sold in Cenova Department Store, Shizuoka City, not in the bottle, but from a tank into a bottle to be closed in front of the customer!
It is a junmai (no pure rice alcohol blended in) ginjo nama (unpasteurized) genshu (no pure water blended in!

Hana no Mai Brewery in Hamamatsu City ‘ the largest Sake Brewery in Shizuoka Prefecture and export a sizeabkle amount abroad.
For quit some time they have been breweing their sake with their own ingredients. They grow their own Yamada Nishiki rice in the same city, uses Shizuoka yeats and the local water! 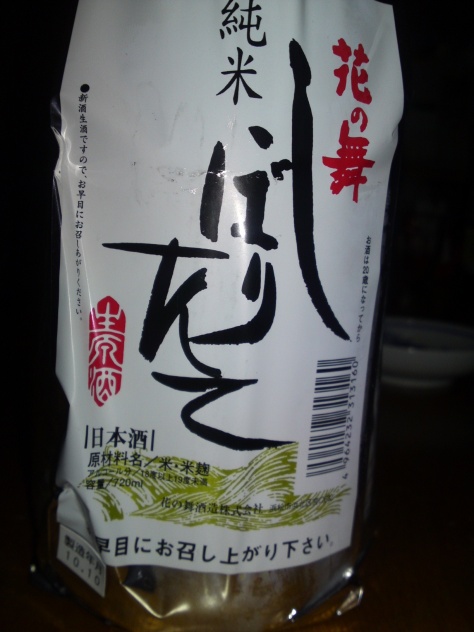 They produce also many limited brews such this nicely warpped “shiboritate/newly pressed” Junmai (no alcohol added) Genshu (no water added!

Overall: Unusually strong sake for Hana No Mai Brewery.
Straightforward and fruity.
Tends to vary with food.
Best appreciated with strong taste food, although the latter might influence the taste.
A good sake for Izakayas!

Last year, on June the 12th to be precise, I concocted “Umeshu” (Japanese plums preserved in sake and shochu) which happened to be so popular that the four litres I had lovingly matured for a whole year disappeared in a couple of weeks!

A Japanese friend of mine, having been impressed with the results of my slightly unusual recipe asked me to put my talents to work with “biwa/loquats”!

He brought me small loquats unfit for normal consumption but perfect for preserves.

I used premium sake and shochu from the same brewery, Hana no Mai in Hamamatsu City, to ensure some regularity:
From left to right: Yaramaika kome/rice shochu (25%), Acha no Tsubone rice/kome shochu, Hana No Mai Junmai Ginjo (15.5%) and Hana No Mai Junmai (15.5%)

I added 1 kg of “koorizato/peserve sugar” to almost 2 kg of loquats (for umeshu, I used only 1 kg, as they had more “flesh”).

Now, we shall have to wait until June next year!

If you try your own hand, make sure your concoction stays in a dark place at a reasonable and constant temperature!