Bell pepper or sweet pepper is a cultivar group of the species Capsicum annuum (chili pepper). Cultivars of the plant produce fruits in different colors, including red, yellow, green and orange. Bell peppers are sometimes grouped with less pungent pepper varieties as “sweet peppers”. Peppers are native to Mexico, Central America and Northern South America. Pepper seeds were later carried to Spain in 1493 and from there spread to other European, African and Asian countries. Today, Mexico remains one of the major pepper producers in the world.

The misleading name “pepper” (pimiento in Spanish) was given by Christopher Columbus upon bringing the plant back to Europe. At that time peppercorns, the fruit of Piper nigrum, an unrelated plant originating from India, were a highly prized condiment; the name “pepper” was at that time applied in Europe to all known spices with a hot and pungent taste and so naturally extended to the newly discovered Capsicum family. The most commonly used alternative name of the plant family, “chili”, is of Central American origin. Bell peppers are botanically fruits, but are generally considered in culinary contexts to be vegetables. When cut off, the top of the bell pepper is referred to as a “pepper pan”. 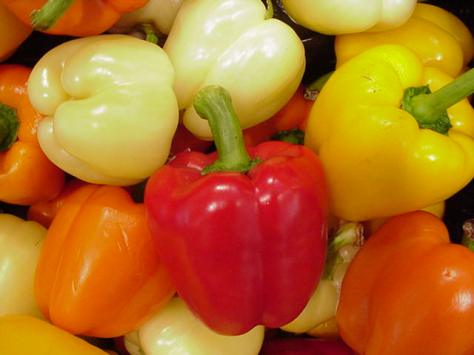 The term “bell pepper” or “pepper” or “capsicum” is often used for any of the large bell shaped capsicum fruits, regardless of their color. In British English, the fruit is simply referred to as a “pepper”, or additionally by colour (as in the term “green pepper”, for example), whereas in many Commonwealth of Nations countries, such as Australia, India, Malaysia and New Zealand, they are called “capsicum”. Across Europe, the term “paprika”, which has its roots in the word for pepper, is used—sometimes referred to by their color (e.g., “groene paprika”, “gele paprika”, in Dutch, which are green and yellow, respectively). Paprika also refers to the powdered spice made from the same fruit. In France it is called “poivron”, with the same root as “poivre” (meaning “pepper”), or “piment”. In Japan, the word ピーマン (“pîman” from the French) refers only to green bell peppers, whereas パプリカ (“papurika” from paprika) refers to bell peppers of other colors.

In the United States and Canada, in addition to the terms “bell pepper” and “sweet pepper,” the fruit is often referred to simply as a “pepper” or referred to by color (e.g. “red pepper”, “green pepper”), although the more specific term “bell pepper” is understood in most regions. In parts of Indiana, Ohio, and Pennsylvania, the fruit is called a “mango”. The origin of this use is in the use of the term “mango” or “mangoed” to refer to pickled fruits. At a certain time, mangoes were available in the United States only in pickled form. Later, it became common in these regions to use bell peppers in pickled form, thus the term “mangoed peppers” or “mango peppers,” later shortened to “mangoes.”

In Russia it is commonly called болгарский перец (bolgarskiy perets), meaning Bulgarian pepper. In Denmark the bell pepper is referred to as “peberfrugt”, meaning pepper-fruit. In Germany, Finland, Norway, Sweden, former Yugoslavia, the Netherlands and Belgium it is known as “paprika”.

In Brazil it is commonly called Pimentão, meaning Big pepper. It’s widely used in a variety of dishes, like pasta, rice and other dishes from Cuisine of Brazil.

In Argentina it is called “Morrón”. Green and red bell peppers are usually found in small grocery stores; the yellow ones tend to be in the supermarket. Grilled, they may form part of the traditional barbecue of this country, called “Asado” (Castilian Spanish for ‘roasted’ or ‘grilled’).

In Costa Rica it is called “chile dulce” or sweet chili and many typical dishes include it as part of the ingredients.

In India, it is commonly called “capsicum” in English, in addition to native terms such as “Simla mirch” (“Simla chili”).

In Sri Lanka it is called “Maalu Miris” in Sinhalese and used in “curries” as a vegetable. “Miris” is Chilli, the hotter variety which is used as a hot spice, and “Maalu” means Vegetable; hence, “Maalu Miris” indicates the less spicy version, which is suitable for cooking as a vegetable, instead of using as a spice. With the similar meaning, bell pepper is called “kaRi miLakaay” (கறிமிளகாய்) in Tamil language.

In Egypt it is commonly called “filfil akhdar”, where “filfil” means pepper and “akhdar” means green. It is eaten as a raw snack, in salads, in various soups and stews, and is also cooked stuffed with a rice and beef filling.

In South Korea, the peppers that are green in color, are the only ones that are called “pimang” (피망). All other colors of bell peppers are referred to as “paprika” (파프리카).

In China, peppers that are green in color, including green bell peppers and hot peppers, are called 青椒 (pinyin: qīngjiāo), meaning “green pepper”. All colors of bell peppers can also be referred to as 柿子椒 (pinyin: shìzǐjiāo).

That is for the excellent information found on Wkipedia!

The color can be green, red, yellow, orange and more rarely, white and purple, depending on when they are harvested and the specific cultivar. Green peppers are less sweet and slightly more bitter than red, yellow or orange peppers. The taste of ripe peppers can also vary with growing conditions and post-harvest storage treatment; the sweetest are fruit allowed to ripen fully on the plant in full sunshine, while fruit harvested green and after-ripened in storage are less sweet.

Here are the most common varieties foun in Japan:

From top to bottom and left to right:
Green, red and yellow peppers (bell peppers)
Paprika and Jumbo Piman/Pepper

Red peppers are ripe green peppers, while the jumbo pepper is valued for its size. 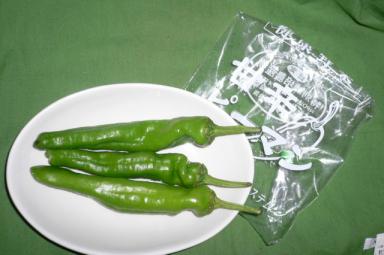 Valued for its mild taste, making it popular to a larger audience.

These are becoming increasingly popular in Japan and come in red, almost black and yellow.

-Season: from June to October, although available on the markets all year round.

-Greatly beneficial to skin when fried!

-Should be combined with oil (fried, vinaigrette) whwnever possible for better absorption by human bodies. Are generally beneficial against high blood pressure and helps recovery from fatigue.

-Choose specimens with unblemished stem cuts. The older, the more change in colour there.

-They are best stored inside a vinyl pouch in the refrigerator.
Old specimens will show blemishes and black spots.

-Pepper bells combined with whole rice, or yam, or scallops, or oysters, will help combat diabetes and obesity, and revitalize digestive system.