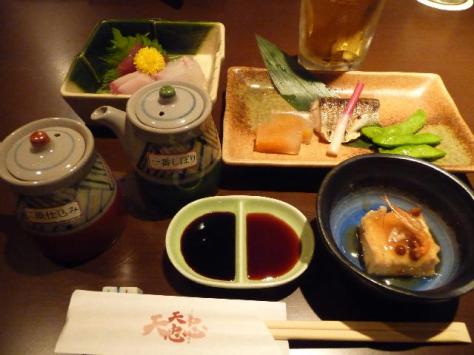 To answer a query by my friend Sissi at With a Glass on tamari soy sauce, I thought that the best way to answer was to republish this old article of mine!

Almost everyone knows or has heard about soy sauce (or soya sauce in Europe).
It is even used in all kinds of cuisines in the world, be they vegetarian or not.

Authentic soy sauces are made by mixing the grain and/or soybeans with yeast or kōji (麹, the mold Aspergillus oryzae or A. sojae) and other related microorganisms. Traditionally soy sauces were fermented under natural conditions, such as in giant urns and under the sun, which was believed to contribute to additional flavours. Today, most of the commercially-produced counterparts are instead fermented under machine-controlled environments.

Although there are many types of soy sauce, all are salty and “earthy”-tasting brownish liquids used to season food while cooking or at the table. Soy sauce has a distinct basic taste called umami by the Japanese (旨味, literally “delicious taste”). Umami was first identified as a basic taste in 1908 by Kikunae Ikeda of the Tokyo Imperial University. The free glutamates which naturally occur in soy sauce are what give it this taste quality. 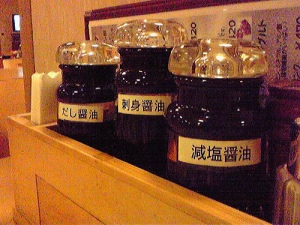 Artificially hydrolyzed Soy sauce
Many cheaper brands of soy sauces are made from hydrolyzed soy protein instead of brewed from natural bacterial and fungal cultures. These soy sauces do not have the natural color of authentic soy sauces and are typically colored with caramel coloring, and are popular in Southeast Asia and China, and are exported to Asian markets around the globe. They are derogatorily called Chemical Soy Sauce (“化學醬油” in Chinese), but despite this name are the most widely used type because they are cheap. Similar products are also sold as “liquid aminos” in the US and Canada. 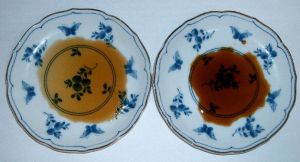 Buddhist monks introduced soy sauce into Japan in the 7th century, where it is known as “shōyu”. The Japanese word “tamari” is derived from the verb “tamaru” that signifies “to accumulate”, referring to the fact that tamari was traditionally from the liquid byproduct produced during the fermentation of miso. Japan is the leading producer of tamari.

Japanese soy sauce or shō-yu (しょうゆ, or 醤油), is traditionally divided into 5 main categories depending on differences in their ingredients and method of production. Most but not all Japanese soy sauces include wheat as a primary ingredient, which tends to give them a slightly sweeter taste than their Chinese counterparts. They also tend towards an alcoholic sherry-like flavor, due to the addition of alcohol in the product. Not all soy sauces are interchangeable.

–Koikuchi (濃口, “strong flavor”)
Originating in the Kantō region, its usage eventually spread all over Japan. Over 80% of the Japanese domestic soy sauce production is of koikuchi, and can be considered the typical Japanese soy sauce. It is produced from roughly equal quantities of soybean and wheat. This variety is also called kijōyu (生醤油) or namashōyu (生しょうゆ) when it is not pasteurized.
–Usukuchi (淡口, “light flavor”)
Particularly popular in the Kansai region of Japan, it is both saltier and lighter in color than koikuchi. The lighter color arises from the usage of amazake, a sweet liquid made from fermented rice, that is used in its production.
–Tamari (たまり)
Produced mainly in the Chūbu region of Japan, tamari is darker in appearance and richer in flavour than koikuchi. It contains little or no wheat; wheat-free tamari is popular among people eating a wheat free diet. It is the “original” Japanese soy sauce, as its recipe is closest to the soy sauce originally introduced to Japan from China. Technically, this variety is known as miso-damari (味噌溜り), as this is the liquid that runs off miso as it matures.
–Shiro (白, “white”)
A very light colored soy sauce. In contrast to “tamari” soy sauce, “shiro” soy sauce uses mostly wheat and very little soybean, lending it a light appearance and sweet taste. It is more commonly used in the Kansai region to highlight the appearances of food, for example sashimi.
–Saishikomi (再仕込, “twice-brewed”)
This variety substitutes previously-made koikuchi for the brine normally used in the process. Consequently, it is much darker and more strongly flavored. This type is also known as kanro shoyu (甘露醤油) or “sweet shoyu”.

–Gen’en (減塩, “reduced salt”)
Low-salt soy sauces also exist, but are not considered to be a separate variety of soy sauce, since the reduction in salt content is a process performed outside of the standard manufacture of soy sauce.
–Amakuchi (甘口, “sweet flavor”)
Called “Hawaiian soy sauce” in those few parts of the US familiar with it, this is a variant of “koikuchi” soy sauce.

All of these varieties are sold in the marketplace in three different grades according to how they were produced:

All the varieties and grades may be sold according to three official levels of quality:

Other terms unrelated to the three official levels of quality: