The “Oni Koroshi/Kill a Goblin” made by Oomuraya Brewery in Shimada City is probably the most famous Oni Koroshi in Japan and actually was the main brand sake of the same brewery. 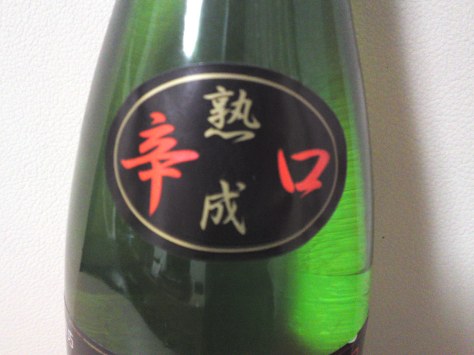 It is a very dry sake originally aimed at male drinkers but times have certainly changed and everyone is enjoying it!

For the history amateurs!
If you want the translation just ask! LOL

Clarity: Very clear
Color: Golden hue
Aroma: Assertive. Dry. Nutty.
Chestnuts, cherries, milk coffee
Body: Fluid
Taste: Very dry attack backed with pleasant alcohol.
Fruity: Apples, cherries
Alcohol not as strong as expected.
Lingers only for a while warming up the back of the palate.
Changes little with food but for a mellower turn backed with stronger alcohol.
Turns mellow with soft nuts once away from food.
As a nurukan/lukewarm shows drier but fruity facets. Turns then very dry but pleasant.

Overall: A sake for all seasons, especially with food. Can be enjoyed any temperature.
Another sake to bring at a BBQ or a raucous party!