It is always a bit complicated for vegans and vegetarians alike to create desserts without using eggs or dairy products, unlessyou start using derivatives and susbstitues, which is not always a good idea.
The Japanese must be, without knowing it, the greatest creators of vegan desserts thanks to such techniques as found in the making of wagashi!

One variety of wagashi is called Kinton.
Kinton, or きんとんin Japanese is a Japanese tradtional dessert made with chestnuts/kuri/栗 and sugar.
Originally created in Gifu in the late 1870’s it is now found and available almost everywhere in Japan for the pleasure of all, vegans and vegetarians included.

Kuchinashi (Japanese) or Gardenia jasminoides (also known as Gardenia augusta) is a fragrant flowering evergreen tropical plant, a favorite in gardens worldwide. It originated in Asia and is most commonly found growing in Vietnam, Southern China, Taiwan and Japan.
The fruit is used as a yellow dye, which is used for clothes and food (including the Korean mung bean jelly called hwangpomuk).
Medicinal uses:
Gardenia jasminoides fructus (fruit) is used within Traditional Chinese Medicine to “drain fire” and thereby treat certain febrile conditions. 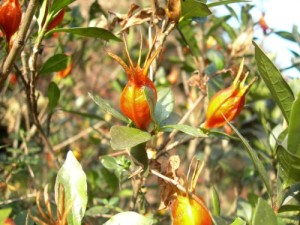 Kuchinashi no mi/Gardenia fruit, dried as found in Japanese stores.

I took the precaution to go through these preliminary explantaions before introducing the following dessert:

-Peel the sweet potato, cut in four legthwise and across again every 2 cm. Leave aside in clear cold water.

-Peel the apple, cut into 8 wedges and slice again every 5 mm. Drop in a stainless pot. Add lemon and sugar. Cover with lid and simmer on a low fire until softened.

-Cut the kuchinashi no mi/Gardenia seed in two and insert it in a small cooking bag (gauze as for bouquet garni).

-In a different pan, drop the sweet potato with ebnough water to boil them. Add teh kuchunashi no mi/gardenia seed. Boil until the sweet potato is soft enough to be easily skewered with a bamboo/wooden toothpick.

-Add １/３ of the apple to the sweet potato and mix well.

-Serve the sweet potato topped with the cooked apple.

-Roast some some walnuts and top the dessert with them!