Not so long ago, the sound of wooden clogs (geta/下駄 in Japanese) could still be heard at any time of the day and night in any season in cities as well as in the countryside.
This is still mentioned as one of the sounds that older Japanese miss most in modern life. A traditional saying in Japanese says that “You do not know until you have worn geta.” meaning that you cannot tell the results until the game is over.
Chefs were wearing them at work inside izakayas and sushi restaurants. Now they wear graceless white vinyl boots.
Interestingly enough, by ignoring geta in favor of Western footwear, the Japanese are not doing a favour to their own health. Instead of being constricted inside shoes with the consequent skin problems during the rainy season and sweaty socks to wear with them, geta allow free movement of the feet in the most natural environment. Contrary to belief, walking with the skin in direct contact with a wooden or lacquered surface does keep the feet at a comfortable temperature, even in the snow.
Moreover, good Japanese-made geta cost an average of 5~6,000 yen (50~60 US dollars), which make them cheaper and far more durable than Western shoes! They can be easily worn day in day out for up to 10 years according to traditional makers in Shizuoka Prefecture!
The great majority of modern geta are made abroad, especially in China these days but traditional manufacture still survives in Japan.
The City of Fukuyama in Hiroshima Prefecture produces 60% of the national output. Hida City in Oita Prefecture is also a major producer.
Traditional and high quality geta are especially made in Fukushima, Nagano, Niigata, Akita and Shizuoka Prefectures.

Geta are sometimes called wooden clogs in English because of their resemblance wit clogs and flip-flops. One could describe them as a kind of elevated wooden base held onto the foot with a fabric thong to keep well above the ground. They are worn with traditional Japanese clothing such as kimono or yukata but (in Japan) also with Western clothing during the summer months. One can still see people wearing them in rain or snow to keep the feet dry, dur to their extra height and impermeability compared to other shoes such as zori.
There are several styles of geta. The most familiar style in the West consists of unfinished wooden board called a dai (台, stand) that the the foot is set upon, with a cloth thong (鼻緒, hanao) that passes between the big toe and second toe. Although there is no need to wear socks, apprentice geisha (also called “maiko”) wear their special geta with tabi (Japanese socks) to accommodate the hanao. 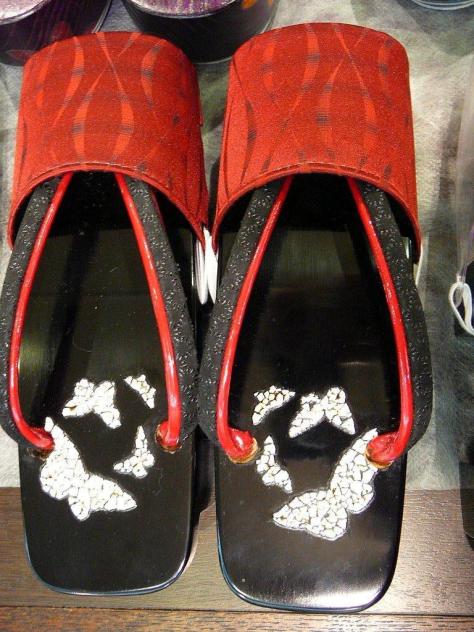 Ladies will often add a protective cap called tsumakawa (爪掛) to protect their toes from the rain or mud in inclement weather.
The supporting pieces below the base board, called teeth (歯, ha), are also made of wood. Cheap clogs are made with cedar wood (杉, sugi), whereas high-quality geta are made of very light-weight paulownia (桐, kiri) imported from Northern Japan.
The teeth are usually made separately and fixed to the base board later (Funageta/船下駄), whereas more valuable geta will be carved out of a single block called (Okaku/大角).
Although great craftsmen are becoming scarce (there are only five recognized in Shizuoka Prefecture in spite of their fame), geta can and usually are suggested to be made on order, so as to perfectly “fit the feet” of its wearer.
Such footwear is becoming increasingly popular abroad where more and more people have recognized not only their practical, health and ecological values, but also for their decorative and fashion merits.

The dai may vary in shape: oval and narow for ladies to rectangular and wide for men as well as in color: natural (harigeta/張下駄), lacquered (nurigeta/塗り下駄) or stained.
The teeth of any geta may have harder wood drilled into the bottom to avoid splitting, and the soles of modern clogs of the teeth may have rubber soles glued to them.
The hanao can be wide and padded, or narrow and hard, and it can be made with many fabrics Printed cotton with traditional Japanese motifs is popular. Inside the hanao is a cord (recently synthetic, but traditionally hemp) which is knotted in a special way to the three holes of the dai. The hanao are replaceable, although breaking the thong of one’s geta is considered very unlucky!
Maiko in Kyoto wear distinctive tall geta called okobo. Also very young girls wear “okobo”, also called “pokkuri” and “koppori”, that have a small bell inside a cavity in the thick “sole”/dai. These geta have no teeth but are formed of one piece of wood. They are carved in such a way as to accommodate for walking.
Japanese professional sumo wrestlers in the lowest wo divisions of Jonokuchi and Jonidan must wear geat with their yukata at all times!

Various types of geta for the true collectors! (this list is far from exhaustive!):
-Sokugeta/足駄: real antiques as these were worn between the Heian Era and Edo Era! They became the symbolic footwear of students in meiji Era
-Yama Geta/山下駄: Square mountain Clogs made of paulownia wood and worn at the beginning of Edo Era. When made with cedar pine wood, they are called Yoshiwara geta/吉原下駄 as revellers in the Yaoshiwara Distritc used them on rainy days.
-Pokkuri Geta/ぽっくり下駄 worn by maiko, geisha and young girls, generally higher and decorated with golden motifs.
-Robou/露卯, Yanagi Geta柳下駄 worn in the early Edo Era.
-Uma Geta/馬下駄, square and made of cedar pine wood. “Horse Clogs”, called so because they sound like horse’s hooves on paved streets.
-Koma Geta/駒下駄, most common all-weather clogs until before the Meiji Era.
-Kiri Geta/桐下駄, high-quality expensive clogs made of paulownia wood. Originally finished with black lacquer.
-Odawara Geta/小田原下駄, very popular among harbor workers and fishermen in the 18th Century in spite of their high price.
-Ippon Geta/一本下駄 or Tengu Geta/天狗下駄, a clog with only one ha/歯/”tooth”. Both worn by kids and adults.
-Taka Geta/高下駄, very high clogs
-Bankara/バンカラ/Narrow clogs with high teeth, popular with older time students.

8 thoughts on “Walking to the Izakaya the Japanese Way: Geta/Japanese Clogs”