It caught off the shores of Northern Japan and south of Kyushu Island.
Catches tend to vary widely.
The Japanese squid can live anywhere in temperatures from 5° to 27°C, and tend to inhabit the upper layers of the ocean. They are short lived, only surviving about a year.
Flying squid have been observed to cover distances as long as 50 meters above the surface of the water, presumably to avoid predators or save energy as they migrate across vast expanses of ocean, uniquely utilizing jet-propelled aerial locomotion.
The fishing season for the Japanese flying squid is all year round, but the largest and most popular seasons are from January to March, and again from June to September. Gear used to catch the Japanese flying squid is mainly line and hook, lift nets, and gill nets, the most popular method being hook and line used in jigging.

When very fresh it can be enjoyed as sashimi, especially with a niso or sesame dressing-based dipping sauce! 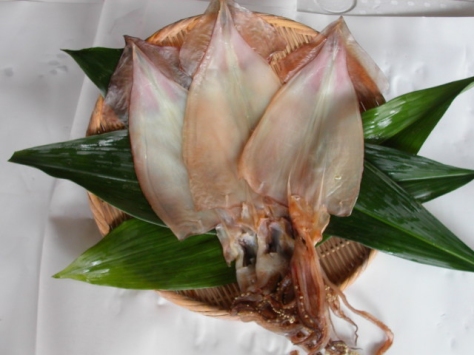 Most of it is turned into various pickled or dried cuttle fish/squid products.
It is also much appreciated broiled or simmered.

Also a great snack when boiled or grilled!

Fresh specimens ought also to be samples as sushi nigiri!

The same simmered and seasoned with tare sauce!