It took a long time but finally the Shizuoka Government pledge to promote Shizuoka Prefecture Tourism seems to switched to action mode!
To all visitors (and residents) to Shizuoka City and Shizuoka Prefecture it would be time well spent to stop for a few minutes and have a good look at the posters the Government has put in the middle of Shizuoka JR STation for all to see!
And have a good look at the bottom of each poster which gives 3 good reasons to enjoy our Prefecture!
So let’s start with the first one!

The SL train running from Kanaya Station/Oigawa Steam Locomotive/大井川ＳＬ to Senzu Station and its hot springs in the Japanese Southern Alps is feature known of all train buffs in the country!

Sakura Ebi! Cherry Shrimps/桜海老 which are exclusively caught in the Suruga Bay in Autumn and late Spring are a delicacy that the Japanese are ready to travel a very long way just to taste fresh and raw!

Kunozan Toshogu/久能山東照宮 is a Japanese Natonal Treasure with the relics of Tokugawa Ieyasu, the Overlord of Japan who retired to Sumpu/Shizuoka at the beginning of the 17th Century! 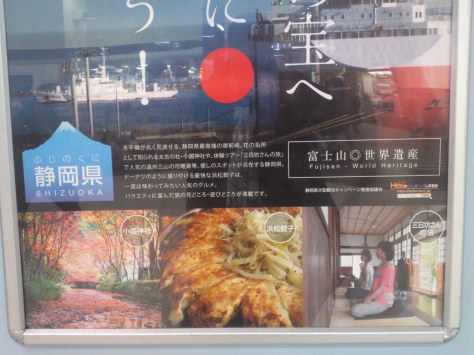 Okuni Shrine/小国神社 is a beautiful Shinto Shrine in the middle of beautiful forest in Mori Machi in Western Shizuoka Prefecture.
Now is the best time to visit it with all the leaves changing colors!

Hamamatsu Gyoza/浜松餃子are famous all over the country and are served in a peculiar crown shape with plenty of fried beansprouts in the middle!

For people interested in Buddhism a three day Buddhist Monk Life Experience can be enjoyed in Fukuroi City! 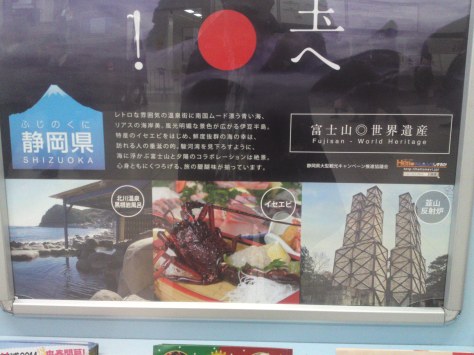 For Japanese hot spring lovers do visit one of the many hot springs by the sea in Kitagawa, Izu Peninsula!

And you cisit Izu Peninsula do not forget this is the season for succulent spiny lobsters!

For history amateurs visit Nirayamあ in Northern Izu Peninsula to have a look at the only existing ship gun foundry/hansyarou/反射炉 (Meiji Era) in Japan! 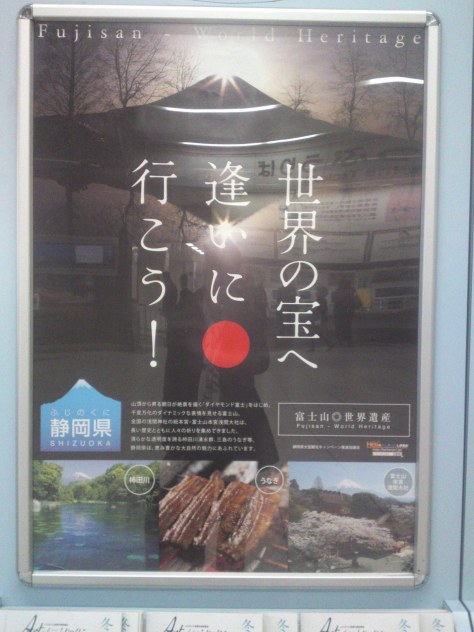 near Mount Fuji you will discover Kakita Gawa/Kakita River/柿田川, one of “Three Clear-Flowing Rivers in Japan”!

Shizuoka Prefecture is famous all over Japan for its eels/unagi/鰻!

For people interested in Shinto and Shinto Shrines do visit the Sengen Shrine by Mount Fuji!

Looking forward to the Winter Canmpaign!