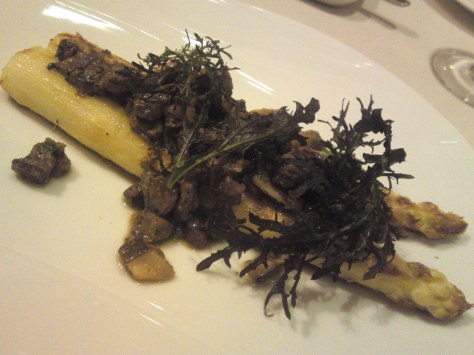 The other day, the Missus wanted to pay a belated (for her) visit to our favorite French Restaurant in Shizuoka City, namely Pissenlit, where Chef Touru Arima/有馬亨さん is busier than ever, what with creating a whole new range of organic jams with local produce and promoting good food at all levels in our Prefecture!
I have always been struck by the seemingly simple presentation of his dishes and I would like to share my views in this particular article!
Now, what did we have?

There were oysters on the menu!
When we debated how many we would order, we were told that one each would be more than enough, so we ordered one poelee and one in gratin!
The first one served poelee on a bed of local organic broccoli was truly enormous. I’m not lying, it was as big as the Missus’ palm!

Viewed from the other side!

You needed to cut it at least three times with fork and knife!
Absolutely succulent, a steak of the ocean?

The other served as gratin will give you an idea of the size with the very deep shell!
The sauce under the gratinee surface is ore a Mornay sauce than a Bechamel, a lot lighter and more delicate in flavors!

A view from a different angle will give you a little idea of the light and unctuous/creamy Mornay sauce!
The colors alone will have you tremble with impatience!

A true dish from Shizuoka Prefecture!

Touru calls it a warm carpaccio of bonito/katsuo topped with local organic greens.

The first picture was actually a back view. This is the front view!

A side view with the lovely mayonnaise to fully appreciate the incredbly tender bonito which had been lightly seared!

You can always expect Touru to come up with rarities!
Tablier du Sapeur! 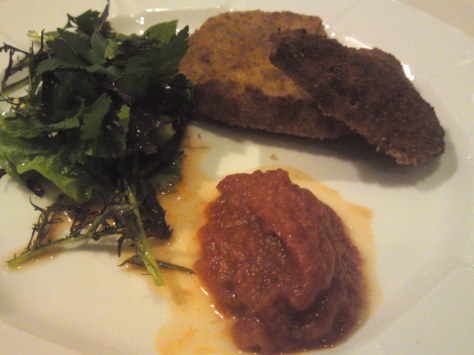 The “sapeur” in French means a member of a special military engineer corps originally created by Napoleon who tended to copy anything Roman for his Legions.
These sapeurs used to wear a thick apron/tablier as part of their parade uniform! 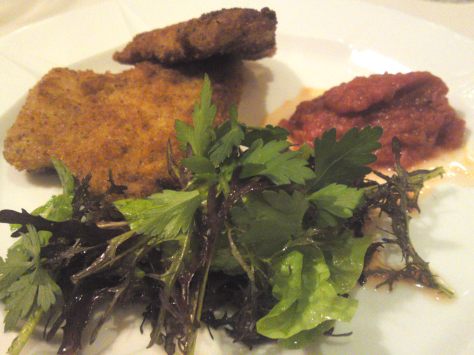 They consist of veal stomach/tripes first separately cooked and then paneed in breadcrumbs!
Even the Missus who cares little for offal appreciated it!
I just loved it!

Here is another fine example of creating a superlative dish with offal: White asparaguses with Suruga Shamo Chicken livers and gizzards!

The raw and fresh enormous asparaguses were first poele before the offal was added to the same frypan!

Suruga Shamo is one of those extravagant shamo/軍鶏/fighting chickens/cocks raised in our Prefecture.
The offal was accompanied with some local bacon and organic greens for a last touch! 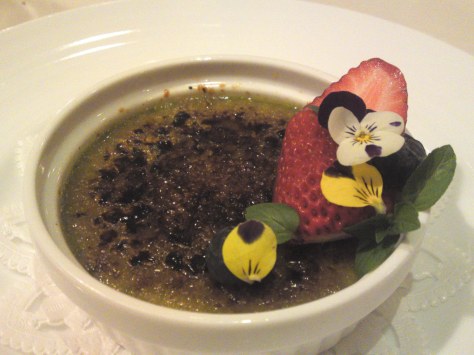 A true Shizuoka dessert?
Creme Brulee concocted with Shizuoka City Hon-Yama tea!
The strawberry and edible flowers are all organic from Shizen No Chikara Farm! 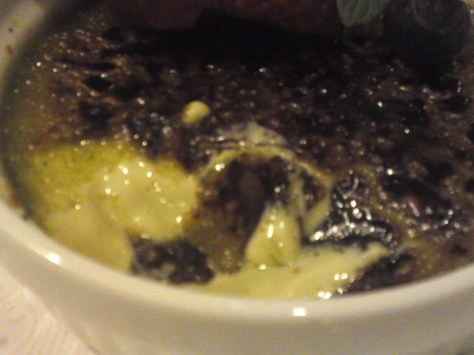 Another Green Fairy?
Certainly a dessert that JRR Tolkien and his Hobbits would have loved to sample! 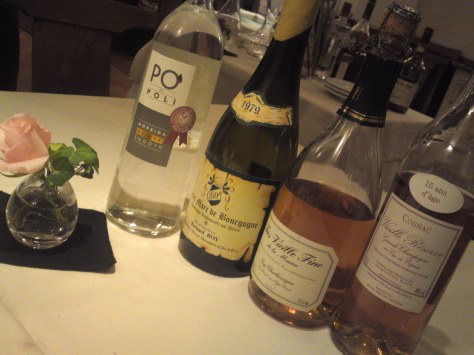 Going for the kill! In my case!
An Italian grappa by Poli, a Marc de Bourgogne 1976 by Bernard Roy, a Vieille Fine de la Marne (Marc de Champagne) or a 15 year-old Cognac by Paul Giraud?
Well, I was born in Bourgogne, so you must have guessed!