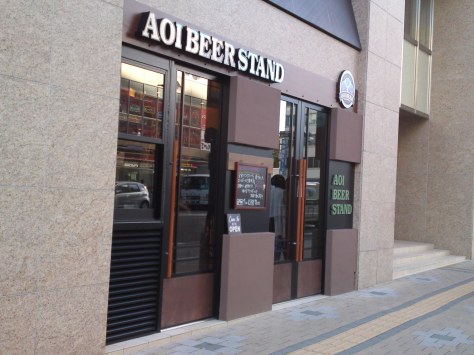 After the recent complete overhaul of Den Building in Aoi Ku a few minutes walk form Shizuoka JR Station North exit, the large street and its pavements were also remade and now we find ourselves with a new space downtown which is slowly starting to attract a new crowd.

The latest addition is a minuscule standing bar called Aoi Beer Stand which opened on the 1st of July!
It is the last addition to Beck Co. Ltd which already owns Mando and Growstock bar/restaurants in Shizuoka City.
To start with the opening hours are a bit unusual: 11:00 am to 11:00 pm every day!

The name Aoi is fairly easy to explain as this bar is located in Aoi Ku, Shizuoka City!

But there is another reason. Mr. Mando, who I should interview soon, is planning to start a brewery of the same name in the very city of Shizuoka! I know where but as this is still confidential you will have to wait until next year for more information! Just know it will become the 11th craft beer brewery/microbrewery in the Prefecture! Whereas the average number of microbreweries in Japan is 5~6 per Prefecture, Shizuoka Prefecture is simply becoming a major area!

Ever-smiling Ryousuke Ono/大野良輔さん is looking after the place in day time whereas Mr. Mando take things in charge in the evenings.

Now, they serve only craft beer and absolutely nothing else!
For the moment they serve 6 craft beer from all over Japan (changing regularly), including 2 from Shizuoka prefecture.
When the new brewery starts they will probably serve only Shizuoka craft beer!
Note that the prices are for large glasses. Add 200 yen for a pint-sized glass.

Although the place can sit 6 people on high stool, the moment you have reached 7 guests the stools are pushed under the bar counter and you drink standing on some crowded nights patrons can be seen drinking standing on the pavement! 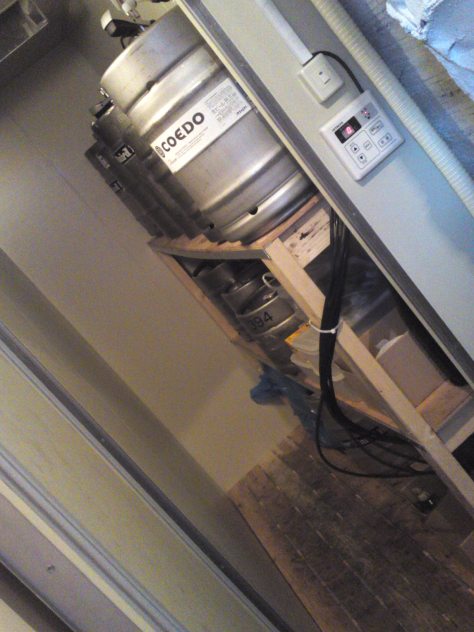 The door inside on the left does not lead to a washroom (which is located inside Den Building) but a minuscule cellar for the beer kegs as all beers are served draught!

The two Shizuoka craft beers presently on offer are from Baird Beer Co. in Numazu City! 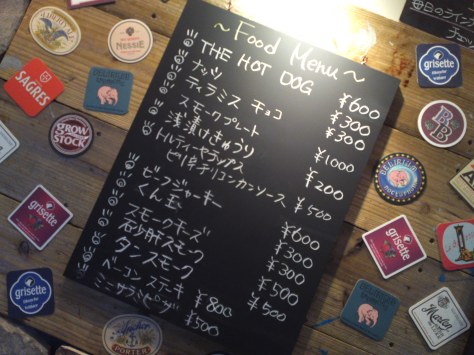 There is some food available though, but the accent is definitely on the beer!

Will come back with another interview of the owner and of his projects soon!