The other day two friends of mine who actually plan to study professionally the art of making soba suggested we all went for lunch to a new small soba restaurant which served buckwheat noodles exclusively made with Japanese buckwheat!
Of course I just couldn’t refuse discovering such a place knowing than more than 80% of soba we eat in this country are made from imported buckwheat flour!

It is clearly indicated that the place serves only zarai soba/在来蕎麦/native buckwheat noodles! 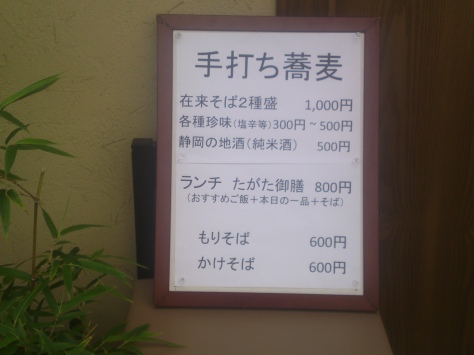 Of course all the noodles are made on site and are so reasonable. Even the local sake is reasonable! Remember that in Edo times sake was almost exclusively served at soba restaurants!

Such a clean place!

You do have to be a bit patient as noodles are prepared only upon order!

Soup/broth for the noodles with grated wasabi and chopped scallions!

My friends had ordered the lunch set so they shared their mushrooms musubi/rice balls with me!

As well as some beautiful tamagoyaki served with grated daikon!

My first serving of buckwheat noodles!
By the way the correct way to eat them is to first taste one without any seasoning then eat the rest dipping the soba into the broth (not too much, mind you!)!

Served on a beautiful earthen ware plate with the character ta/田 for “field” which is the first Chinese character of the restaurant place Tagata/田形!
On the left you will notice another beautiful earthenware pot containing the soba yu/蕎麦湯/hot water in which the same noodles were boiled to be added an drunk with whatever broth you have left!